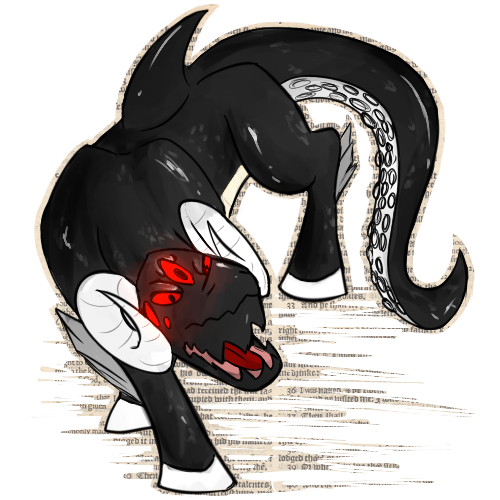 “There's nothing more blessed than these things. The gods are the cause of every horrible thing in our life? These might as well be the gods. I hate them. I hate them so much. 0v0” — N-11473

Attack Method: Runs up and rams the enemy in the hopes of stunning them, then attempts to trample them under their sharp hooves. If one gets too close to their mouths, they will bite and try to rip off chunks from their opponent.

It's dark. Dark as the cruel world the Neo has made for its wretched people, with eyes that burn red like the smouldering jaws of the gods themselves. Ram's horns curl wickedly atop its head, fixed with a sharp point that frames the creature's long face, the face that never breaks stride, never pauses; never, ever stops talking.

The cyriac is a large creature with a body that superficially resembles some kind of horse or deer combined with an alligator, with white hooves and sleek black scales adorning it. The only place it does not is its underbelly, which has cream-coloured ones. Its tail has suckers on the underside of it, and its prehensility allows the cyriac to use it to ensnare prey or predators that sneak up behind it by wrapping its tail around them. A dorsal fin juts out of the middle of the cyriac's back, and pale grey fins jut out from the back of its legs at the knee. A pair of grey horns sprout from the back of the head, curling at the ends in such a way that the sharp end points away from the cyriac.

It has seven eyes in total; two pupil-less ones on the side of their head that only see heat signatures and movement, and three pupiled ones in the front that are capable of seeing normally. If a cyriac loses sight in their front eyes, the larger pair of their pupil-less ones will grow into regular sight, leaving only the smaller pair to perceive the heat signatures of the environment around it.

Though the cyriac may not have all seven of these eyes open at any given time, there will always be at least two of them open, even when it is asleep. A cyriac's eyes are always red, and glow brightly in the dark independently of any other light sources. This appears to be a tactic meant to dazzle nocturnal creatures when the cyriac suddenly turns its head to face them, allowing the cyriac to draw closer during their daze. For its owner, this means they will have to learn to sleep through the brightness.

All cyriacs have two mouths, with one for speaking and one for such things as eating and drinking. Whether the one for each purpose is the top one or the bottom seems to depend on the individual, but never changes. In the common cyriac, one of these mouths will never be closed; whether wild or notail-raised, it will be making sound nonstop with it. With those used as a capture creature, this means passages from the Book of the Neo.

Much like its eyes, if one of these mouths is damaged irreparably, a cyriac may develop into using its remaining mouth for all things. However, this makes it much more vulnerable to choking, as it will refuse to stop speaking no matter what.

The cyriac is capable of achieving fairly high speeds if it feels the need to; this is usually only ever seen when it goes for the kill, however, as it is primarily an endurance hunter and almost never breaks out of a steady lope in any other circumstance. If its notail tries to attack it, it will also exhibit this agility capability when it quickly but harmlessly bowls them over.

Cyriacs are strong enough to be ridden as a mount, and are ideal for use in traversing bodies of water if one doesn't mind getting their legs wet due to how low the cyriac sinks into it.

Anyone who enters the forest with a cyriac will always grow to hate it. Hate it like they hate its many glowing eyes, like they hate the sound of its voice - that thing that never changes inflection, never stops nor falters no matter what the beast is doing, whether asleep or awake. They will grow to hate it the same way they will hate the gods.

That is the job of the cyriac.

But that is not the only job of the cyriac — another one, arguably its most important, is teaching the notail under its tutelage the Book of the Neo. This is where all the words the cyriac intones is from, having been painstakingly taught beginning from the moment it was birthed the passages it would associate with danger or peace, as precise as a birdsong but far more varied. It is the job of the notail, in turn, to learn what each part of the scripture corresponds to — and if they want the cyriac to do anything useful for them, what stanza has been associated as a command with which action for it.

It is because of this practical application, whether that is learning that any line cited by The Alligator Hunter means from their cyriac that there is viable prey around, or that "May the gods answer you when you call in distress; for when you turn to the blessed, you write your own retribution. - The Hateful Horse 20:1" leads the cyriac into readying itself to attack, that helps guide the N-class that deals with it into memorizing everything they need to. If they were to simply tune out the capture creature's nonsense right from the get-go, they may well miss something vitally important, and so, they will have to listen. And so, they will have to learn.

In the wild, cyriacs will occasionally group up in order to hunt their prey. These groups are often casually referred to as a swarm for its similarity to Q-class ones, though a congregation of cyriacs might be more accurate. Congregations generally come and go depending on which cyriacs are available for it, and sizes vary from two or three cyriacs to ten, based on what they have found available to pursue. Sometimes these congregations will stick together for months if hunting for food hasn't been plentiful enough for them to feel like they will succeed in hunting alone.

Cyriacs raised as capture creatures view their notail owner as a fellow member of this congregation; these tamed ones have been taught to never wander away on their own permanently, and will refuse to leave their owner for as long as they are in the forest that is considered the danger zone. However, they will not mind being left behind once outside it into an area that they know has plentiful food.

Should their owner ever attack them, the cyriac won't mind overly much; young cyriacs, after all, have a running habit of attempting to cheat others in the group out of their share of the hunt by trying to drive them off. The cyriac will simply treat their notail as a rowdy child and discourage them with a knock on the head, usually with the blunt part of their horns. Rather tolerantly, they will never do anything much more harmful than warning kicks and knocks of this caliber, no matter how much the notail might try to charge them. Some children just have to take more lessons to learn how to socialise than others.

As the cyriac takes years to be trained into memorizing the entirety of the Book of Neo, N-classes do not get to keep this starter once they leave the forest, and are instead offered the choice of any common capture creature that any other class uses as a starter.

This is a wise decision for various reasons; but one of them is that, considering the torment the notail has gone through from their capture creature, the majority of them are quite unlikely to treat it well now that they need no longer depend on it for their survival.

Notails that chose a cyriac as their capture creature often seem to be more talkative, as if still trying to drown out their old pet's words with their own. In addition to this, they usually tend to be more willing to wait for results, patiently pursuing something for far longer than where anyone else might have chosen to give up partway through.

Acus: A less common subspecies, anyone who keeps a cyriac as a pet must be ready for a rather sizable pet indeed. Though they usually tend to be smaller in size than the common cyriac, averaging with a height of 4'3 ft, this is still pretty tall for a quadrupedal creature. These kinds come in colours other than black, though all acus pelts are still dark shades. Acus may have yellow or cyan eyes rather than red.

Acus do not talk quite as often as the typical cyriac, but are still relatively chatty. They aren't usually taught words prior to being sold, unlike its common cousin, and instead, much like a wild one, tends to pick them out from listening to others. This makes for a lot of nonsense phrases being thrown out, which fans of the cyriac tend to find endearing. It will likely only speak whatever it wishes, whenever it wishes, unless its owner trains it to do otherwise.

This domestic variant, unlike its normal counterpart, has had its genetic memory of congregations altered. While it still considers its owner a part of its group, it now no longer ever feels like it would be okay to be left alone.

Preaching to the Choir: Cyriacs have the ability to speak through either of their mouths, though they do not understand the meaning behind the words they mimic. They do not seem to require rest for their vocal chords at all; they will chatter whether asleep, awake, eating, drinking, swimming, or even if you tie their mouths up. The common cyriac is trained to use this ability in order to recite the Book of Neo nonstop once they follow their notail into the forest.

• Due to the nature of this capture creature, it generally is only allowed to be booked in advance. This disallows the notail from already being used to tuning them out, or realising that they are meant to be an annoyance before they learn this in the forest.

• There are hypotheses that the cyriac may prefer speaking so much as a method of echolocation, especially as wild ones are so often seen loitering in murky waters.

• The passages taught as their cues and cautions are different depending on what years the cyriac was raised. As cyriacs can live for a long time unless killed, this means that even an N-class being in the same year as another doesn't indicate that their cyriacs will obey the same words at all.

• The only way to make a cyriac stop talking is death. 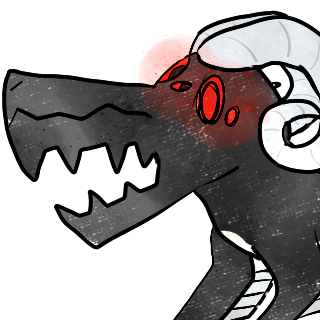 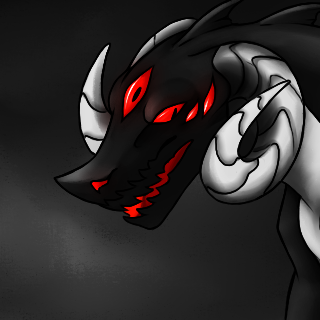