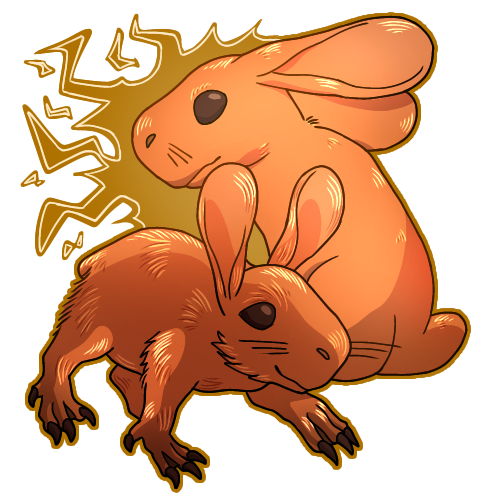 Attack Method: Swipe or bite at the opponent or discharge stored electricity.

Crovicks are a small, capybara-like species capable of generating electricity that can supercharge electric weapons to deal damage far more powerful than usual. Able to fit in the palm of a notail's hand, their fur is long and covered in a natural metallic material that allows them to generate and conduct electricity. The fur is prickly but easily bent, like a thin open wire. Most crovicks are a solid copper color, but can have variations.

They have stump-like tails and long, constantly upright ears. Their faces are rounded and they have beady black eyes. Long, straight whiskers stick out perpendicularly from them. They are quadrupedal, their legs are stocky and short, and their feet have small amounts of webbing. The shed fur of a crovick can be harvested to make wires, though they are more brittle than normal wires and might break during wiring or extended use.

Crovicks can hijack electric appliances to temporarily make them function at a much higher power than usual. During this time, anyone who touches a crovick will be given a nasty shock, and a potentially deadly one, depending on how much electricity the crovick is surging. Additionally, crovicks require a large energy store to supercharge items, generally requiring at least three crew rations at least a day before a surge. The more rations fed to a crovick, the more powerful the surge will be, but crovicks cannot eat more than five rations at once.

Crovicks that have been fed enough rations and are able to surge glow a faint yellow-orange and occasionally get harmless electric sparks across its fur. This charged state can last for four days before the ability to surge wears off. Once a crovick has surged, a person would have to feed the crovick a large amount of rations and then wait a day before it is able to surge again. They only need such a high number of rations to be able to surge, and need a normal amount of rations for the animal's size in every other situation.

If two or more charged crovicks surge a single object, the supercharged electric object will be able to perform to extreme heights before likely shorting out and breaking.

Crovicks are a burrowing species that creates long tunnel systems with others of its kind. They occasionally surface to explore or graze, but nearly every crovick will emerge to open air in the presence of a thunderstorm. It is then that any charged crovicks of the herd will surge their electricity. The discharged electricity flows across the tightly-packed crovicks, and that combined with the electric charge of the surrounding storm promotes fertility in the fauna.

In captivity, crovicks are commonly bred for their valuable and practical applications for electrical devices. Often mistaking anything electrical for a thunderstorm, if a charged crovick is allowed to get close to such a device, they will surge their electricity into it, temporarily supercharging it. Electric handheld weapons supercharged by a crovick are typically able to fire with increased output for the duration of seven seconds that a surge normally lasts, plus one guaranteed supercharged shot. A crovick fed five rations will generally be able to make a weapon deal twice the damage of its usual output, making it especially valuable for powerful but slow-charging weapons. For supercharged items outside of handheld weapons, they will normally be able to function at a much higher speed or power than usual for much longer after the actual surge ends, the period lasting a few minutes to a few hours, depending on the item.

Crovicks are a social animal and enjoy the company of other crovicks. A prey animal, they are skittish in the wild, and even bred ones will generally shy away from anything too frightening. If cornered, they will surge whatever electricity they have in an attempt to get away. They are docile and can become easily accustomed to interaction with people. They communicate with soft chirps or squeals. Crovick litters consist of about three to four pups and are watched over by every crovick of a herd. Crovicks from different herds might try to eat the pups instead. In general, letting two crovicks from different herds interact is not recommended, as they will often fight.

Radiant: An extremely rare variant of crovick, radiant crovicks have short, incredibly dense fur that allow them to generate their own electricity and become charged over long periods of time without having to eat large amounts of rations. The process of becoming passively charged takes about five days, and if fed large amounts of rations anyway, it will only take them a few minutes to become charged instead of a full day. Their fur cannot be harvested to make wires.

Supercharge: Crovicks can discharge their stored electricity to temporarily make electric appliances function much more powerfully than usual. Most items, unless they require an extremely large amount of power, can be brought from an empty battery to exceeding full power.

• Tamed crovicks are able to surge their electricity on command towards any object, including those that are not electric, making them dangerous shocking devices and easier to command which item they supercharge. Untamed crovicks tend to surge the first electric object they see.

• While handling an item while it is being supercharged is generally not dangerous, touching the surging crovick itself is. Virtually every reputable seller will provide electricity-proof gloves with the crovick to make handling safe.

• Some appliances are not rated for being charged so quickly and will instead break.

-Back to Fauna Menu-
< Cratic
Cyriac >