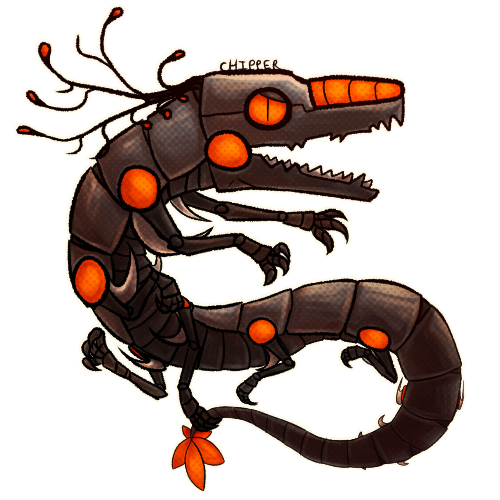 “BROTHER. WOULD YOU LIKE TO TAKE PART IN THE MURDER HOUR? OR. THE "SUPER HAPPY FUN TIME HOUR." AS IS THE FUCKING STUPID. POLITICALLY CORRECT TERM FOR IT?” — Thanatos

Likes: Murder, Hypnos
Dislikes: Anything else
Attack Method: There is no attack pattern a Thanatos would refuse to do. Commonly known for drawn out and slow deaths.

The larger Thanatos ships are known as the "Grim Reapers", while smaller ones are just known as "The Thanatos."

After these first few Thanatos generations, they were greatly changed due to how costly they were to build and the lower need for giant war ship carriers. The common Thanatos is six to seven feet tall and looks like the skeleton of a lizard-like species. The head and body of them is box-like to allow easy storage. They are normally dark blacks and greys with red accents.

Both types of Thanatos units have multiple spikes on top of their heads.

Thanatos units are highly aggressive and should not be approached alone by people the Thanatos do not know. Thanatos units do not hold any attachment to anyone other than Hypnos units, but Thanatos AIs have a sense of understanding that they shouldn't attack a person currently working with them. Thanatos units are hugely non verbal, nearly never talking and only informing people of how they feel using clicks and screeches. If someone attempts to do something the Thanatos does not want they will throw a tantrum, knocking down objects and sometimes attacking the person upsetting them.

When Thanatos units do talk they are short and to the point, while using derogatory terms and curses. They only wish to belittle the people they speak to, feeling that anyone who cries because they "slightly insulted them" is not worthy of around them.

Due to how hard it is to keep a Thanatos it's important to keep a Hypnos around. Thanatos units will protect and follow their Hypnos brother wherever they go. As long as no one ever touches a Thanatos' Hypnos, no one will be harmed. Thanatos will put his life on the line for his brother.

To put it simply, the Thanatos is used for war. Thanatos units are not meant to be in homes, offices, or anything else but a ship heading into some kind of battle. The best one can do with keeping a Thanatos in an irregular spot is to basically hold a Hypnos unit hostage in the same area, forcing the Thanatos to play as nice as possible, which isn't very much.

Large Thanatos units carry many ships and inform the AIs of what the plans are that day, or may carry bombs to be dropped on city. Large Thanatos units are only used for the largest of raids. When paired with a Hypnos, the situation becomes more dire, as the Hypnos can put whole cities to sleep quickly, before the Thanatos launches an attack. The causalities are deep when this happens due to it commonly being a surprise attack. Civilians, nor most soldiers will have any chance to escape the war field or protect themselves.

Smaller Thanatos are considered heavy hitters and ship protectors. Normally Thanatos ships are marked as other ships so that any invaders will get a deadly surprise as the Thanatos appears and attacks. Smaller Thanatos can easily defend themselves and others, but never help a wounded person, preferring to keep on the attack.

Hypnos: There is nothing in the universe Thanatos wouldn't do for his brother unit. Even in situations where Thanatos knows that if he doesn't get away he will die, he will stand his ground and protect his brother. His brother and him rarely get to talk as his brother is nearly always sleeping. Hypnos is hypersensitive to loud noises, and Thanatos cannot stop yelling most of the time, commonly upsetting Hypnos. Hypnos knows he's trying his best though.

Hermes: Hermes is Thanatos' best friend other than his brother. This doesn't seem to be the case to on lookers as all they see is Thanatos insulting Hermes constantly. Insulting each other is just how their friendship work, and the moment Thanatos finds himself in a bind or tricked, he calls upon Hermes to help save him.

Mors: Thanatos hates Mors and how of all things a small childlike robot is what people compare him to. He hope what would be considered his Roman version would be strong and deadly much like him. He hates that Mors wants to kill people quickly and painlessly as there's not drama in such deaths.

Hades: Thanatos listens to Hades, sometimes. Even though Thanatos will yell and scream against most of the things Hades says, when Hades gets blunt with Thanatos he grumbles and listens to the king of the underworld.

Thanatos keeps the death rates in line and running at their correct speed. Without Thanatos around there may be too many people dying, or more commonly, not enough people dying, causing overpopulation issues. Average age of death could suddenly skyrocket, meaning less people die.

As Thanatos' patron power, he will murder people randomly, at his own whim. He will murder characters for "Having too much plot", "Looking ugly", "Just because he didn't murder anyone this planet", and will time to time murder a player's crew member for "Getting in the way" or causing issues. He doesn't always have reasonable explanations for his murders, and in fact he rarely does.

If Hypnos is the other patron, Thanatos' frequent murder rates goes down, and he allows you to pick one person to kill per two planets.

Big Thanatos ships are filled with many fake passageways and death traps to prevent an outsider from taking it over, meaning the crew for the ship itself cannot mess up on memorizing the insides of the Thanatos ship, least they be killed on their first day of work.

• Thanatos mainly sticks in around in the underworld. He can commonly be seen sleeping in Tartarus for 80% of the day, only waking up to make sure his brother is ok, and slipping away to kill anything foolish enough to get near Tartarus.

• Holding a Hypnos "hostage" is as simple as keeping it in a room. Thanatos units are notoriously bad at reasoning and do not seem to get that simply walking their brother unit out of the room and away from the area would "free" the Hypnos. Thanatos units seem to believe that someone else must free their brother.

• Other than murder, Thanatos are surprisingly good at noticing injuries and illnesses, sometimes even before the person notices it themselves. If a Thanatos keeps calling one a name related to a certain illness, it is a good idea to play it safe and get it checked out. 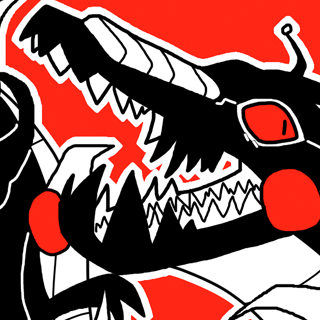 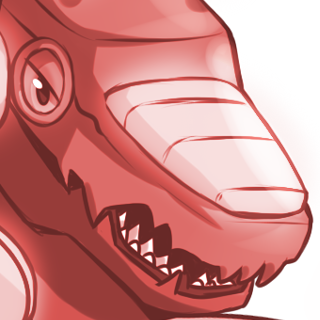 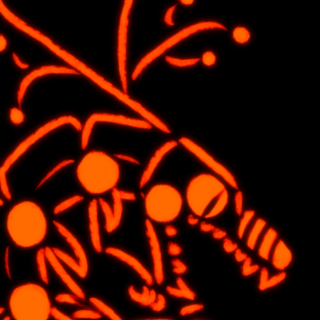