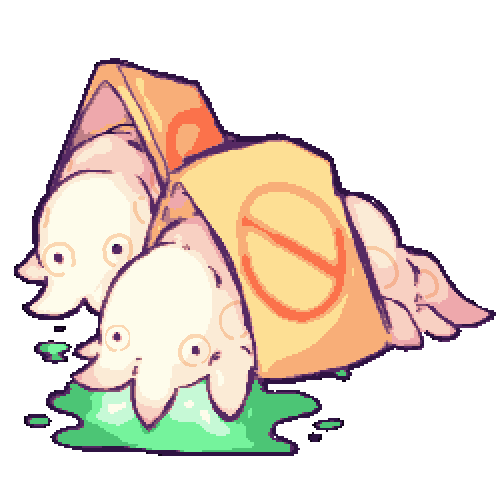 “There's a living, breathing wet floor sign right there. It screams when you get too close to it! Explain to me right now how this happened!” — Manager to a worker who managed to slip on a wet floor

Attack Method: When attacked, the domesticated dan'gersign will spit out recently drank floor liquids. This usually is a feeble attempt at defense except in cases where the liquid it drank is dangerous in itself. Feral dan'gersigns will shoot out liquid in a thin, but high-pressured stream. The liquid is highly acidic and, if gotten in the eyes, will cause permanent blindness.

The dan'gersign is a beetle modified to be permanently stunted into a larvae-like state for the sake of acting as a bio-machine. Often regarded as "cute," the large pesdo-infant is a soft pinkish-yellow with faint circles adoring the body, most notably around the eyes. Its squishy texture is accented with a thin covering described as like velvet to the touch.

Its numerous short arms allow it to crawl at an alarming rate even as it carries its shell along with its enlarged plastic creating glands found on the front of the head. This shell can only be loosely defined as such. Instead, it bears extreme resemblance to a floor sign, often that of a do not cross or wet floor sign, though its exact appearance depends on the make and model of the dan'gersign.

Like most bio-machines, the dan'gersign has very little to do. It sits completely still until it senses a dropped liquid or food item. Inching its way to its destination, if the spill is not cleaned up, it will consume it, polishing the floor's surface with its thin layer of fuzz as it does so. This bio-machine doesn't just devour the inanimated but will go after bugs and small mammals if given a chance.

Once done consuming its meal, it patiently waits for one hour. Should no other incidents arise, it returns to its original spot to rest until another spill summons it again.

When approached while in the middle or during its guarding of a spill, the dan'gersign makes a chattering sound, warning those nearby that the surface may be dangerous. The closer one gets to an active scene, the louder it becomes, causing most to turn around and leave to save their ears from the sound.

Feral'sign: An escaped and mutated version of some of the first prototypes of the dan'gersign. These are five times the size of the typical creature. It has multiple "shells," all made of a much harder material than the original, and is covered in spots. As they move, they create a thin, slippery slime trail that causes unnecessary damage to hikers and wildlife, especially near cliffs. Approaching the feral fauna is not recommended as when it feels threatened, it can spit a plastic-like acid that burns through the skin before hardening.

House'sign: A household variation that lacks a shell and can climb most surfaces. This loveable pet still has enlarged plastic glands, but instead of its normal routine, it creates random abstract-like formations. If any triangular floor sign is placed above them, they will stop attempting to produce a shell and use that instead.

Mega'sign: A large version of the fauna, these are used in big stores where, while they do not react to spills, they become active when triggered. They go through the whole store, spitting out a cleaning liquid before drinking it back up. Stores that frequently host smaller species are not recommended to use a mega'sign as they are known to confuse them for stains.

• People enjoy taking pictures of them with silly hats or taking them to strange locations for photos. They are quite popular pets on the internet, and because they are bio-machines, they lack the need for any emotional care. 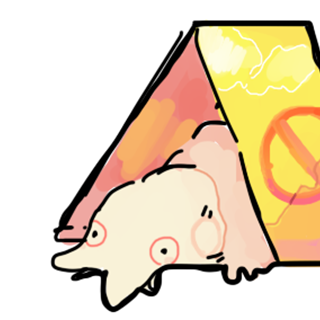 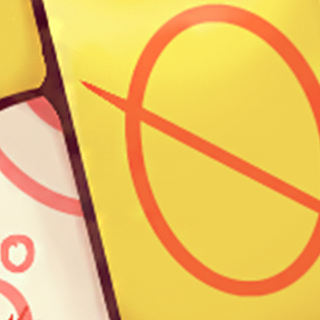 -Back to Fauna Menu-
< Cyriac
Davaron >