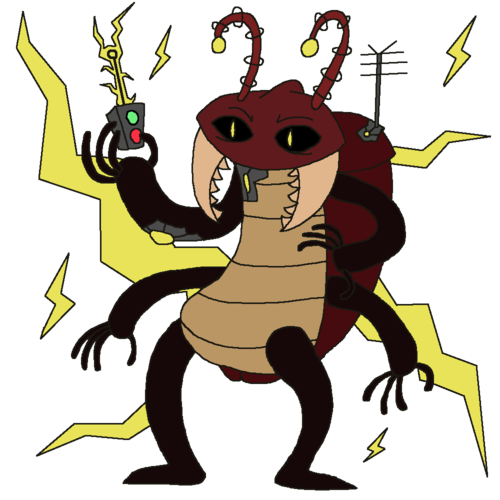 Attack Method: If they have them on hand, kloegarb try to use EMPs to disable the technology of enemies before resorting to violence. If physical force is necessary, kloegarb will use various forms of mechanical weaponry. They have even been known to use robotic suits and mechs for major battles.

The kloegarb see no reason to honor any gods.

Kloegarb look like humanoid cockroaches with dark eyes, large mandibles, and four lengthy black arms, each with three fingers. Every kloegarb has a set of two droopy metallic antennae embedded into their head. Sometimes bolts of blue energy can be seen jumping between these antennae. If a kloegarb loses their antennae, they may lose some trivial knowledge until their antennae are healed, repaired, or replaced. The small ridge between a kloegarb's antennae contains a small organ connected to the top of the brain. This organ is likely some sort of storage area for the extra intelligence of a kloegarb, and looks like an organic microchip made out of thin red carapace.

The backs and heads of kloegarb are covered in a thin carapace, typically ranging in color from dark brown to pale orange. The carapace on the back covers vestigial insect wings, which at some point in the evolution of kloegarb may have been used for flight, but are now useless. A kloegarb's back carapace gets much thicker near the head in order to keep the wings safely rooted in.

Kloegarb are known to be born with simple metal pieces or non-functional mechanical devices attached to them. As they age, these are altered to fit the growth of their body, and, in the case of mechanical devices, are altered to be able to function properly. These devices can range in complexity from simple tablet screens to artificial limbs or organs, based on the engineering skill of the kloegarb involved in the alteration progress.

By all means, due to their slightly regenerative cockroach-based biology and partially metallic bodies, kloegarb should be an incredibly durable species. They are not. Kloegarb are incredibly fragile and squishy, to the point where some kloegarb have lost limbs while working on machines. They can easily create prosthetics, and they typically try to stay out of conflict, but their fragility is one of the universe's most bizarre biological inconsistencies. Oddly enough, data shows that kloegarb were much more durable before industrialization, but there is no reason this should have changed.

A common misconception is that, due to their bodies being part machine, kloegarb are clockworks. This is not correct at all. The mechanisms on their bodies are, in most cases, not directly connected to their internal organs. In the few cases that they are (such as with metal organs), the kloegarb are tested for the virus by Uthenia's bureaucracy before being given a not-a-clockwork permit that they can show to any who doubt their authenticity. This permit is required to be renewed annually through a complex process many have described as, rather ironically, "kafkaesque."

Kloegarb want nothing more than to stay in complete isolation, away from all distractions. Unfortunately, living on a relatively small planet and being forced to work together, they are rarely able to do this. Perhaps this is the reason that their general dispositions often tend to be uncaring at best and spitefully rude at worst.

Kloegarb have an evolutionary instinct to avoid sticking together whenever possible. This is thought to have originated to motivate the kloegarb to scatter, find metal, and bring it to the Mother. However, this instinct has since turned into a disadvantage. It may seem odd at first that the naturally antisocial kloegarb would set up factories and bureaucracies, but the industrialization of their species by Mr. Whiskers was a sudden shift in their society that they may not have had time to properly adapt to.

Kloegarb are wonderful inventors, able to make delicate changes to very intricate machinery thanks to their ambidexterity and focus. They enjoy tinkering around with machines more than anything else, and can often be found doing this after storming away frustrated from social interactions. Even before they entered what could be considered an industrial age, kloegarb built primitive drills, vehicles, scanners, and mechs.

Kloegarb have an irrational and vehement hatred of robots and AI. When asked about this hatred, kloegarb will simply groan and mumble something about pure metal and code not deserving to be alive. Occasionally, this hatred will manifest in the form of newly-made kloegarb gadgets "accidentally" causing electromagnetic pulses that shut off ship AIs temporarily. An organic navigator is strongly suggested if you need to take a kloegarb with you on a ship.

Kloegarb first began to write about their history when they were a simple and small tribal society of hunter-gatherer-tinkerers. Many dwelled in workshops, obsessively building machines in order to better serve the Mother. Their original homeplanet, Alloi, had the marvellous and bizarre ability to regrow metal like plant life. Kloegarb harvested metal easily from mines in hills that regrew all the bronze, steel, copper, and tungsten that they needed. However, although this gave the kloegarb an incredibly large and renewable source of food and machinery, the growth of metal would be the planet's downfall. The metal kept growing faster than the kloegarb could mine it, starting to slowly cover the whole planet in a mass of metallic horror. The kloegarb, smart as they were, could see that Alloi was soon becoming inhospitable, but couldn't figure out how to get their entire species off the planet.

However, the kloegarb would soon make first contact with the rest of the universe. Mr. Whiskers, a marvellous catlas industrialist, came across the planet and told the kloegarb of the wonders of advanced society far outside of their small villages on Alloi. Mr. Whiskers also established bureaucracy among the kloegarb, and introduced them to modern technology. Mr. Whiskers is described in the journals of the Klue Tribe leader Ungugen as "a heavyset and besuited feline covered in carapace, although thicker than ours, and much redder in hue."

Ungugen goes on to describe a contract written by Mr Whiskers, asking to "sign away the will and durability of an insignificant percentage of posterity in exchange for a new homeplanet far from the metal plague of Alloi and expanded intelligence species-wide allowing for mental capacity beyond that of the rest of the universe." Ungugen signed the deal, and Mr. Whiskers worked with him and the rest of the kloegarb over the next few decades to enter the space age and build Uthenia, the current homeplanet of the kloegarb. It is debatable what the other terms of the contract meant, but the description of Mr. Whiskers being similar to that of a recruited contractor paints a rather chilling picture that kloegarb seem to refuse to acknowledge.

Klougart: Klougart, unlike the kloegarb, can actually be described as caring and positive. This is likely because their role in kloegarb society required them to work together even before industrialization. Klougart are medics and repairmen for other kloegarb, specifically trained to fix kloegarb antennae and alter machines attached to some kloegarb as they grow. Klougart are common to see off-planet, as they enjoy being around people. Their optimistic attitudes and friendly nature make them wonderful therapists and guidance counselors. Klougart are shorter than kloegarb, have longer antennae, and have lighter carapace. On Uthenia, klougart wear typical nurse caps for easy identification in emergencies.

Kloeber: Kloeber comprise the military of kloegarb society, rougher and tougher than the average kloegarb. Instead of the cleverness characteristic of the kloegarb, kloeber use raw brute strength to solve their problems. However, although they may be buff, they're still fragile, and their running into trouble screaming can often spell their doom. Kloeber are even more antisocial than kloegarb, but tend to get into aggressive arguments instead of simply shying away from social situations. Thankfully, they're easier to manage if you eventually get on their good side. Kloeber are taller than kloegarb, have larger mandibles, and have darker carapace. On Uthenia, kloeber wear headbands and large boots for easy identification in emergencies.

Mothers: When a kloegarb eats enough of a specific substance, similar to royal jelly, their body mutates into the form of a Mother. Mothers are insentient gigantic beasts that feed on large amounts of metal in order to produce kloegarb eggs. Mothers look like massive grubs with kloegarb heads and dozens of large antennae all across their bodies. There was originally one Mother in every kloegarb tribe, but since the kloegarb bureaucracy was established, the substance has been under highly secure guard in order to make sure only one Mother exists at a time. Kloegarb on Uthenia celebrate a holiday every year where they chip in to feed the Mother, but the Mother is fed scrap metal and failed gadgets left over from Uthenia's factories every other day.

The Mother's many antennae can communicate with the antennae of all other kloegarb, storing data collected by the kloegarb, sending old information that would otherwise be forgotten, and rarely sharing sharp signals if injured. The Mother is also fed small gadgets containing information that every kloegarb would require, as any data it is fed is stored as a backup of all kloegarb intelligence. When a Mother is dying, the antennae of all kloegarb will become very droopy and limp. Once a Mother is dead, since they have no information backup, all kloegarb begin to slowly forget information, starting with minor details, but eventually growing to losing entire memories. To prevent this catastrophe, the kloegarb bureaucracy allows any kloegarb living on Uthenia to volunteer to become a new Mother. Since becoming a Mother seems to involve a loss of sentience, only kloegarb who feel like they have no other way to contribute to society volunteer.

Assembly Line: Kloegarb have four arms, and are excellent at using each arm for doing different tasks. Their ambidexterity allows them to write a detailed report with one hand while putting together machinery with the other three. This makes kloegarb incredibly efficient workers. If kloegarb use all of their focus on one task, they can do it in nearly half the time.

• Despite their general physical weakness, kloegarb are surprisingly resistant to chemical and radiation-based poisoning. This resistance is theorized to have evolved due to a combination of the massive amounts of smog produced on Uthenia and the otherwise noxious atmosphere on Alloi.

• The Mother lives in absolute solitude deep within Xushueria, the capital of Uthenia, surrounded by the majority of Uthenia's military bases. The kloegarb bureaucracy keeps the area heavily guarded, only allowing a select few within even a mile of the Mother. These individuals deliver the Mother scrap metal in large trucks and information in distant whispers.

• Due to their metal diet, a commercial airliner can sustain a single kloegarb for over one year. This fun fact was discovered by a very unfortunate kloegarb pilot.

• A relatively disproportionate amount of recruited contractors were once kloegarb. This is a rather odd fact, given the amount of known species in the universe and the antisocial nature of most kloegarb. What is even stranger is how different these kloegarb seem to be after recruitment, their personalities resembling that of original contractors more than kloegarb. 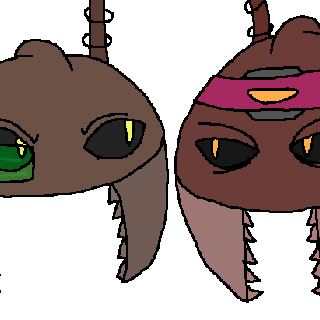 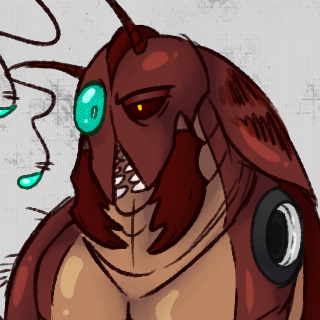