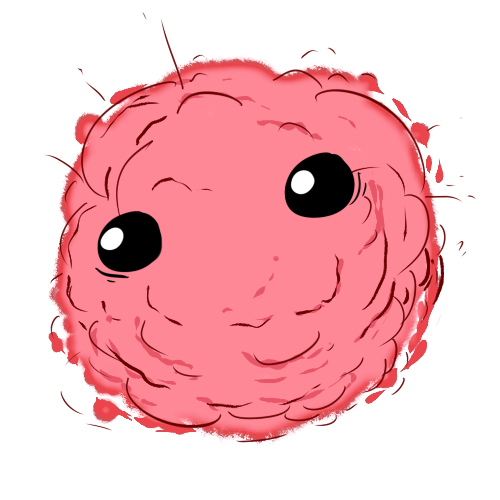 “*Transforms into helicopter looking fuzz ball to inform everyone to get to the choppa.*” — Armote Schwarzenegger

Attack Method: Most mites will not fight back due to their normally pacifistic nature. However, if it ever comes to it, a mite may attempt to suffocate their opponent by wrapping their body around the face of the attacker.

[Reflexive] Neutral trait
Characters with this trait will sometimes perform things on reflex without conscious thought. Depending on the character it can range from things like covering their head when they see a bird to hitting someone who comes up from behind.
[Optimistic] Positive trait
This character doesn't lose morale as fast and can never hit negative morale. No matter what the situation, this character will keep their head up high and may raise the morale of others. The optimistic trait may drain sanity if the character is in a bad situation for a long amount of time.
[Mute] Negative trait
This character cannot speak. Even if this character is not very affected by this, other characters can have a hard time comprehending what they mean if they're not good at understanding expressions or hand signals.

No one is fully sure if mites have any kind of god.

Mites are small, round fuzzy creatures that grow to be 1 to 2 feet tall, with two decent sized black eyes. Mites lack a proper mouth of any kind, but can consume liquefied food via soaking it up through their skin. Mites seemingly lack any kind of bones whatsoever, and have a bit of a spongy texture underneath the mound of fur that covers them. As a result of being a completely boneless organism, mites have a limited form of shape-shifting ability, able to reform their body into various shapes with varying complexity.

Mites come in many different colors, but are in most cases very pale shades. Examples include sky blue, candy pink, and light green.

The mites are a rather intelligent species, and are often deep thinking individuals. However, the intelligence of mites is often overlooked due to their limited range of communication with other species. Despite this, many mites will find jobs to utilize their intelligent thinking skills whenever possible. Space faring mites are very eager to join with crews, and will happily work any job given to them as long as it is within reason.

Your average mite is very cheerful and upbeat. While not often recognized for their IQ, mites are widely known for being the go-getters and cheerleaders of a working crew. They are often the first to act in emergency situations, and are noted for being incredibly proactive in a team. However, mites are also fairly weak in a physical sense, and will shy away from confrontation. Additionally, if the ship does not accommodate for species that lack two arms and two legs, they may also require help from others to perform trivial tasks.

Historical records of the now barren planet of Elbbirt are hard to come by, as many have been lost to the sands of time. According to the few records that are left, mites had been the apex predator of their planet since their early ancestors. While mites are not very large themself, their prey species had ranged from small insect-like life forms, to near microscopic organisms, with which the mites would easily crush and absorb their fluids. With no other predators to compete with, mites thrived on their own planet, and quickly advanced in technology as their intelligence grew. By the time the mites were discovered, they had only been steps away from reaching the space age.

The next hundred years in mite history are considered a dark age for their species. Communication was difficult between the mites and contacting species, as mites made nary a sound and could only communicate through shapeshifting into various shapes. The majority of other species refused to play charades with the cute and colorful mites, and they were quick to be written off as unintelligent, and then placed into the pet trade in their early years of being distributed into space.

Introducing a mite into your crew as a new pet or mascot quickly became a fad, much to the dismay of an entire species of highly intelligent fluffy cotton balls. Some seemed happy, or rather resigned to their fate, when it meant that they were given free food and a home. However not nearly all individuals felt the same resignation as others did, and the relationship between alien and mite grew more and more strained as time passed. After so many years of constant pet trade and poaching mites from their home planet, the population of mites from Elbbrit rapidly declined. In the current day, the original mites are now entirely extinct in the "wild."

However as most fads are doomed to fade, so did the idea that mites were merely just fluffy pets. Instead of a violent revolt against the ones who had mistreated them, they opted to show how useful they could be to their fellow crew members. The perspective of mites changed, little by little, as it would become apparent that mites had their uses. Furthermore, researchers had a revitalized interest in the fluffy sponge creatures with their sudden rebellion. Soon, documents were published that proved that mites were not simple minded creatures, but a sentient race that could work under the same ranks of those who studied them.

By the end of their dark age, mites had comfortably moved into the spot of being recognized over the galaxy as a sentient race. While many other species would still struggle to accept them, the Mites looked on with optimism.

In the days that mites populated Elbbirt, it was a lush and very moist planet that was home to a diverse set of mainly small organisms. No creature would grow bigger than two feet, and mites ruled over anything smaller than they were. Humidity cultivated all sorts of boneless, gelatinous creatures that lived amphibious lives, to escape into the water from the waiting non-jaws of the mites.

Those days have long since passed, and all that remains Elbbirt is a dried out husk. Ruins of mite technology still stand today, from the time before they were whisked away into space, but all life has seemingly ceased since the extinction of the original, Elbbrit born mite. No mite populates this planet anymore now that it cannot sustain their needs, and is for the most part abandoned except for the occasional researcher or sight seer, wanting to see the corpses of machines now forgotten.

• Mites have access to limited shape-shifting. They cannot turn into wolves, dragons or anything terribly complex, but they can contort and squish their bodies to fit into small spaces that normally they wouldn't be able to fit in. As a result, hide-and-seek matches between mites can last for days on end.

• Mites reproduce by budding, and will only reproduced when introduced to clean water. When mites were first introduced as pets, it was a common misconception that mites needed a bowl of water to drink from, as they got most of their fluids from what they soaked up as food. Many captains were taken by surprised when one mite turned to into 20 mites within minutes of leaving them something to drink.

• Mites can also use their bodies to communicate without speaking. They call this sign language-esque language Mootspeak.