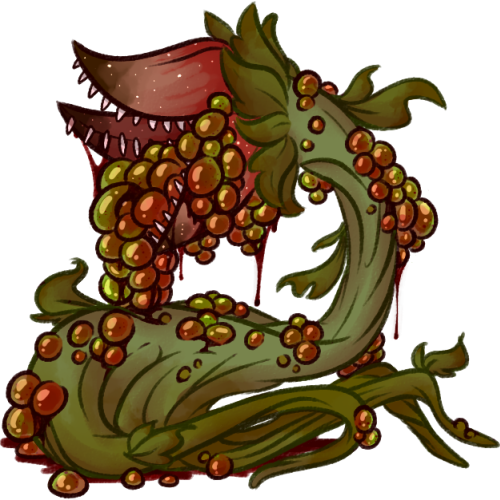 “What can I say? I guess some people just can't hold their wine.” — A quote taken from a popular musical, in which ampelos slime being used as a poison is a major plotpoint.

Attack Method: Ampelos are mostly passive clockworks, and will not attack to preserve the illusion of being a harmless plant. However when aggravated, ampelos will whip and flex their vines, bursting their many boils in an attempt to pacify their victim via infection.
Summary: The Ampelos strain is a that targets plant life to help spread its infection. Those infected will break out into slime filled boils, growing off of them in bunches, visually similar to grapes on a vine. It's known to kill non-plantlife races upon ingestion, so that the ampelos may consume their bodies like fertilizer.

Ampelos usually take the form of many tangled vines adorned with 'fruit' similar in appearance to grapes. A fully formed ampelos will appear as nothing more than a plant, stationary and unassuming. In areas and planets where clockwork awareness is less widespread, it could be easy to mistake the fruit of an ampelos with that of something perfectly safe and edible. However, a few tells differentiate the deadly ampelos from an average fruiting plant.

First of all, the most obvious way to tell apart an ampelos from a normal plant is that their vines will flex and writhe when bothered. Although this is the quickest way to check, it's also not recommended unless you could get some distance between yourself and the ampelos, as the chances of becoming infected are much greater the closer you are to it. Ampelos' vines are a dark green, with leaves that may appear brownish or even dry along the edges. In spite of this, their 'fruit' will always appear lush and juicy. The second easiest way to tell them apart is that their 'fruit' will constantly be dripping with a thick, syrupy juice. These fruiting bodies are not what they seem, as they are actually many pustules that cover ampelos, full of pus and clockwork slime. These boils produce a pungent sweet smell, primarily for drawing in insects and other fauna to feast upon its flesh, but have been known to fool all manners of farmers and hikers alike.

Infection takes place once an animal or person has consumed the slime of ampelos. Most species infected with ampelos, rather than transforming into another instance of the clockwork, will die shortly after consumption, usually taking only 30 seconds to 5 minutes before the infected perishes. Ampelos will then wrap its vines around the victim, pulling them in to consume their prey, adding to their length and mass. Robots are subsequently also pulled into the ampelos, but due to this particular strain taking in very little metal, the bodies of robots are grown into rather than added directly into their mass. Ampelos will reinforce their bodies by using robot shells as armor, slinking back into it as protection if necessary.

However, interaction with the ampelos strain is much different when it is introduced to a plantoid species. This is how the ampelos strain spreads, as it is only plaintoid species and fauna that will transform into ampelos when infected. Those infected will feel their effects take hold rather quickly- the first symptom of ampelos manifests as the victim becoming passive, almost like an intoxicated-like state. If their goal was to destroy the clockwork that infected them, they will stop in their tracks, their thoughts slow and hazy. In the following days, ampelos infected will stumble away from the site of their infection. As many of these clockworks are found within forests, the infected will wander aimlessly, becoming lost and confused within the thick of the woods. Boils will bubble up upon their skin, filled with a deep red, sticky clockwork slime, and the infected will start to sprout vines along their limbs. It takes very little time for ampelos infected to fully transform, their fate finally sealed as they find a place to quietly sink their roots into, and wait for prey to come to it.

The demeanor of ampelos is slow and calculated. Once its host has fully transformed into vines and pustules, ampelos will find a place to ‘root’ into for the rest of its lifespan. These roots do not serve any purpose other than anchoring itself down onto its new home, and as such, it will be drawn to settling down in woodland environments. Those who run vineyards will often be taught safety procedures when encountering an ampelos, as the strain is particularly drawn to such locations as hiding spots. In time, the clockwork will choke out the plantlife surrounding the ampelos infestation, slowly replacing its dead neighbors with itself. However, it should be noted that ampelos does not convert the surrounding terrain or plantlife in its area, it can only grow larger itself and kill that which it surrounds.

Although these are the areas that ampelos are most commonly found in, they are not limited to these types of settlements, and will hunker down anywhere viable. A tenant renting an upper story room that has not been seen for several weeks will be discovered as an ampelos, rooted and curled around the bed. A new grape plant suddenly springs up overnight in a community garden, in spite of no one having planted one there. These cases of ampelos born into more urban spaces are less likely to thrive, as ampelos’ main target is not other sentient species, but instead are fauna that are more easily fooled into eating its flesh.

Hamadryad: An especially rare and eerie form of ampelos. Rather than fully committing to the imitation of a grape vine, their vines are coiled together in such a way that will resemble a body, a rough approximation of a head, torso, two arms and two legs. This mimicry is much less effective than the normal strain of ampelos when encountered by sapients, as the clockwork isn't able to construct a perfect replica of any species or fauna, often mixing and matching different traits. They're horribly uncanny in appearance, and worse yet they will recreate bodies with their internals spilled, the boils that were once employed as fake fruit will now resemble entrails and open wounds. They will either be depicted as laying on the floor on their back or side, or more disturbingly, their vines will string them up and display them against trees.

Although it cannot fool sapient beings, the hamadryad's strength is drawing in insects and scavengers to it. This is because instead of the normally sweet enticing scent that the common strain of ampelos produces, hamadyrads produce a strong scent of decay. Hamadyrads are almost never found within close proximity to civilization, only for the fact that the stench of one can be picked up within a 3.5 mile radius, alerting anyone in the immediate area to the awful smelling clockwork.

Clockwork Poison: While deadly, the use of ampelos slime in clockwork hunting methods is a rather common practice. The effects of the ampelos strain are so strong, that other strains of clockwork that consume its slime become paralyzed for a prolonged amount of time, leaving them vulnerable to attack. As such, other strains are known to avoid ampelos growths, even the decay scented hamadryad subspecies do not draw in fellow clockworks. But in many 'advanced' clockwork hunting kits, a vial of ampelos slime is included, meant to be thrown into the mouth of a hungry clockwork to paralyze it.

The larger the clockwork is, the more slime it would take to induce paralysis, making it more useful in taking out more medium sized clockworks.

• The name "Widower's Wine" comes from the use of ampelos slime as a poison, the practice dating back hundreds of years. Just as grapes are used to make wine, it's very easy to conceal a bit of ampelos slime in red wine. Those who drank it, provided they're not a plantoid species, would die soon after. Crime cases involving ampelos poisoning have become fewer and fewer as the years go by, with the prevalence of clockwork safety awareness being more widespread than ever. Nowadays most people know that although the person dies of ampelos, the body still very well carries the infection, and handling the body and/or disposing of it poses the risk of it spreading.

• In areas that are home to not only ampelos, but other strains of clockwork as well, have a chance of making ampelos a carrier of those strains. Ampelos will take in any scraps of meat or puddles of blood that happen to be within reach, and may pick up the remains or scraps of clockworks passing by, or just as well pick up strains that are airborne. The more of a certain type there are in close proximity of the ampelos, the more likely chance that ampelos will become a carrier. This ups the danger of having an ampelos infestation, whereas normally any non-vegetation species would drop dead after eating ampelos slime, they may instead transform into whatever neighboring clockworks there may be.

-Back to Clockwork Menu-
< Typhon
Eidolon >