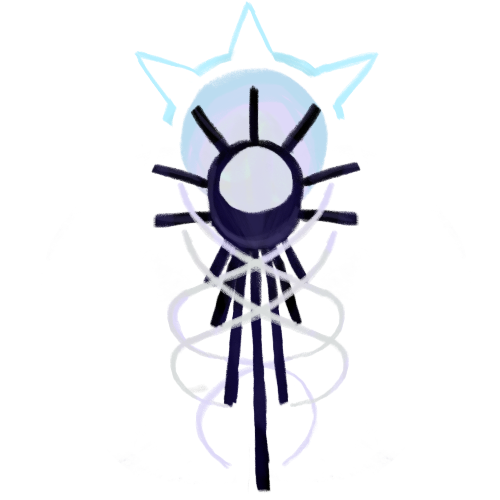 “Upon the twisted heath alone/ a light did see I in the dark / I followed it and I did find / a gleaming chattering white spark” — Alwick Gethwyn, Poems Of The Darker Stars

Attack Method: It tries to scare people off, then runs away if that fails.

Wardens are glowing spectral creatures, consisting of geometric shapes floating at head height with wispy trails hanging underneath. They typically have a rising sun symbol on them somewhere, or it forms part of their body. The body itself is mostly made out of a watery gel which tastes incredibly foul, and has little rigidity to it on impact, although this makes them extremely vulnerable to normal guns. They come in two types, nicknamed "talkers" and "takers."

Wardens can become incorporeal, a state in which they cease interacting with the rest of the world. The repulsive effect that enables them to float, however, is unable to push against the ground in this state, and they immediately start falling. If they do not become corporeal again before reaching the ground, they slide straight through and fall, presumably coming to a halt near the center of the planet as gravity ceases to have an effect.

These properties have resulted in them being classified as a universal anomaly, although a small team of scientists are known to be working on a theoretical explanation for this. Overly-dedicated notails sometimes form teams of metaparxi whose only job is to wait around for them to appear then bother them until they slip up and fall back into the ground.

Wardens appear occasionally near places where lots of people have died, such as battlefields, the sites of disasters, and hospitals. They float around and hide in closets and closed boxes, as well as some other behaviour specific to subspecies.

Wardens are non-hostile, even in self-defense, and will always attempt to flee if physically attacked.

Talkers: Talkers are white, and have smooth wisps below them. Their sun icons tend to float near them rather than being on the body itself. They are nicknamed this because they imitate the voices of they have recently heard, and chatter and burble meaningless nonsense parroted from overheard conversations to themselves. Many people believe they are imitating the voices of the recent dead.

Takers: Takers are black, with long scratchy tails. They are known for their much-despised habit of stealing, defacing, or otherwise interfering with the bodies of the recently deceased, which they carry out in total silence.

• It is considered very bad luck to see wardens in a graveyard, because of the unfortunate implication.