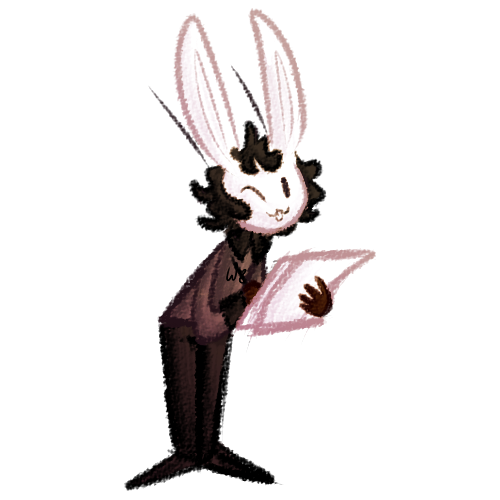 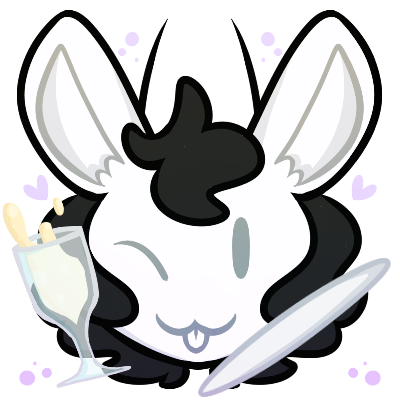 Job: Notail Leader of the W-class
Likes: Helping people, Their children, Everything
Dislikes: Nothing
Notable contributions: W-8 is the leader of all W-aiter class notails.

The most immediately noticeable thing about W-8 is the friendly air they exude, so much so that it almost as if even a complete stranger could approach them with a problem, and W-8 would not only listen to their woes, but also do their best to help resolve them. Although they, like all notails, wear a mask at all times, one can't help but have the feeling that even if their face were visible, they would be smiling anyway.

Other than that, their appearance is rather ordinary for a notail, with their dark hair, dark skin, and unsegmented antennas leaning slightly back. Like most notails, they dress quite plainly, only wearing dull colors with a shirt that has their name printed on it, and their mask is that of a cheerful white rabbit winking playfully with its tongue sticking out to form a ;P expression.

More than anything else, W-8 is friendly; like all W-classes, they are unable to feel any negative emotions whatsoever, so even in high stress situations they remain completely calm. They are utterly devoted to helping others, spending 100% of their time doing so, and no matter how harshly anyone speaks to them, they will never feel even a drop of resentment.

It would, however, be a mistake to assume that this means W-8 is stupid. W-8 is a very observant person, often noticing and remembering small details others usually miss, and they generally use this data to help others and recommend changes that might leave them happier and more productive than they were before. They might suggest a G-class try applying for a job in an area they've never considered before if it's clear to W-8 that they might be happier there, or else encourage an I-class to rearrange their working space if it seems like some kind of clutter is muddying their thoughts for a case. However, W-8 feels no ill will if these are not carried out; they are, after all, only suggestions.

To aid them in this, W-8 keeps detailed notes on everyone they interact with, noting various preferences and quirks and such. When asked why they do this, they provided one reason: they have great difficulty truly relating to the feelings of others, something they seem to feel is due to their status as a W-class, and thus keeping notes means that even without an innate ability to understand pain or discomfort or fear, they have enough data that they can still somewhat predict how others react to such things. Thus W-8 can figure out what might be causing someone unhappiness in a way perhaps even someone with natural empathy but who hasn't done as much analysis as W-8 has would find difficult, and thus work to fix whatever is wrong.

W-8 loves everyone - they are incapable of anything else - but they seem particularly fond of children, especially their own, and in their lifetime they have had many, many children. They have a habit of babying their kids, even the adult ones, and although they do back off if asked to, within a few months they're back at it with the babying and affection.

Perhaps one of W-8's only hobbies unrelated to their work involves photography - they love taking pictures, particularly of their kids, and keep a meticulously organized archive of every single shot they have of them. W-8 is incapable of feeling wistful or grieving the children they've outlived, but they will occasionally dig through their files to look at them anyway. If in the process they find a picture of a child who is currently alive, they tend to send that pic to the child and coo over how small they used to be, much to their children's embarrassment.

W-8 was born a rather ordinary W-class and had a rather ordinary upbringing, completing tasks, helping other children, all sorts of things preparing them to spend the rest of their life serving others. When it came time for them to enter the forest, W-8 chose to follow a L-ocal notail child, despite knowing full well how dangerous such a thing could be, but the two managed to make it out alive regardless. They spent some time with another L-class as the one W-8 worked for trained, and when their own L-class decided to set off to take over a new apartment complex, W-8 naturally followed.

A L-ocal notail's tenants are always a specific kind of person, so W-8's new duties mostly involved things like helping the tenants relax, taking care of basic tasks they were unable to because of illness, injury, or some other reason. If a tenant was on bed rest, W-8 would come in to do things like clean the apartment, make them food, and anything else their L-class boss asked them to do for whatever purpose. According to W-8, this is where their habit of recording things about people stems from; it was, after all, very important to keep track of who's where, has what condition, needs what assistance from them, and if their L-class had any special orders regarding them, and it was simply easier to recognize signs of unhappiness or discomfort in tenants unwilling to speak up about such things if W-8 had a large number of examples they could mentally compare them to.

One of the more notable tenants was an I-class who had been badly injured while on a case and was taking some time to recover, and W-8 visited them every day to do things they were unable to without exacerbating their wounds. The two of them formed a close bond, and when it was finally time for the I-class to leave the building and get back to work, W-8 continued to visit them anyway, though only when they weren't busy helping anyone else. The two kept in touch over the years, eventually starting a relationship and even having a child together.

Eventually W-8 gained some renown for being particularly attentive to the needs of every tenant who entered the building, sometimes helping them figure out what steps they might be able to take once they leave so they can have the smoothest possible transition back to work. W-8's I-class partner encouraged them to apply for the position of W-class leader, and due to their work, their application was looked at and they were given tasks to measure their ability against the W-8 at the time. W-8 managed to complete all of these easily, and after some consideration, was eventually promoted. From then on they've had a relatively quiet time taking care of their duties, never trying to take too much of the spotlight, though the number of children they've had over the years has certainly given W-8 something of an odd reputation.

Like all class leaders, W-8 is cloned and revived upon death. Unlike other class leaders, however, W-8 has lasted far, far longer than normal. Though they may be perfectly capable of carrying out their duties, it is still incredibly abnormal for them to have kept their position for this long in spite of any competitors that have popped up over the many years they've served, to the point of only being younger than two O-classes. Naturally, theories abound as to how this can be the case. One support for these rumors is an extremely strange pattern where they are sometimes suddenly demoted only to be hired as W-8 again after a couple of months, but nothing has been confirmed as none of the people involved seem willing to answer questions on the subject.

W-8, What? ;P: W-8, like all W-classes, is utterly incapable of feeling any negative emotions whatsoever. It doesn't matter what's going on, they will never panic, nor ever lose morale. This can become unsettling in extreme situations where the only natural response is negative, though; it brings attention to the divide between W-8's mind and those of "ordinary" people's.

• W-8 has no preferences when it comes to words like "mother" or "father"; some of their children call them dad, some mom, some parent, and that's just fine for W-8.

• W-8 is one of the oldest notails alive. When asked how this makes them feel, they tilt their head, as if to think about their answer, and say, "I'll be around as long as I'm needed. That's all there is to it. ;P"