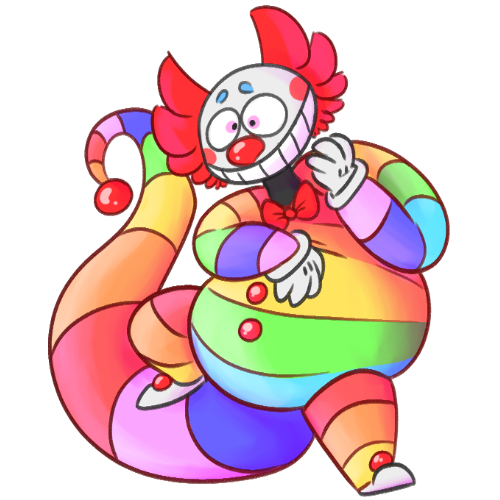 “These guys will have you dying of laughter or die trying, literally” — A tourist's take on zanni

Attack Method: Zanni are more inclined to flee than fight. But if they must, any smart zanni always carries an extra cream pie or a comically large mallet.

[Clumsy] Neutral trait
This character is more likely to drop objects or make small mistakes. Sometimes their mistakes end up being for the better, but most of the time the mistake are small.
[Humorous] Positive trait
This character likes making jokes and doing funny things. They greatly entertain others and make them laugh, raising morale.
[Coward] Negative trait
This character will always try to back down from a fight, though they will still act in self-defense if they don't have a choice. If forced into dangerous situations, they will suffer morale loss, and will be more inclined than most to abandon their crewmates.

The zanni first and foremost honor a god which they called Reymomo, who they seem as the spirit of humor and satire. Reymomo is depicted as a large, heavy set striped creature in colorful attire, and had once ruled as a king before he was driven away by the beasts of Kirkos.

Zanni are bipedal, colorful creatures that come in a large variety of shapes and sizes. The most basic zanni have striped bodies, a white face with a pair of red, feathery appendages protruding from the sides of their heads, and a long chunky tail. These feathery appendages are similar to gills, however they move and flap, and indicate emotion. All zanni have a red, bulbous nose, and red bulbs on their feet and at the very tips of their tails ;functionality of these bulbs are unknown. Zanni have a ruff around the base of their neck, which may be smooth or ruffled. Due to the large diversity of zanni traits, almost no two will look completely alike.

The skin of the zanni is extremely elastic, and rubbery to the touch. On the inside, zanni are nearly completely hollow with the exceptions of their heads, as their organs are very minimal and are mostly located within the tail. To retain their shape they must be filled with air, however they may vent out air from four holes that are located on the back of their hands. Zanni are completely boneless, and the only hardened internal structure they have within them are their cartilage skulls and teeth.

Naturally joyful, and very eager to learn. Zanni are characterized by being an incredibly friendly and lively bunch with a love for entertaining. More than half of all existing zanni have some sort of profession in entertainment; most taking up the typical comedian job, but many have branched out to all forms of entertainers to fit all different cultures. Their intuition is keen and quick to pick up on the types of humor of the people around them, in the hopes of being able to make them laugh and smile. All zanni have the basic instinct to keep the others around them happy with humor; an instinct that dates far back to early zanni that would play into their predators primitive senses of humor to make a quick escape before being torn to shreds.

Typical zanni welcome almost anyone with open arms and cheerful demeanor, as most do not judge others by looks alone. Zanni are social butterflies, and will attempt to introduce themselves to as many people as possible to make quick friends, and many will have large circles of friends that they'll stick to. Zanni are an extremely socially reliant species, as zanni on their home planet may live together in pods of at least 30 individuals in tightly packed homes. Therefore, space faring zanni seek the attention of others and value their happiness above else to keep their own health in check. Their need for social interaction is so great that a zanni left in isolation for more than a few days may die of shock.

Early zanni evolved alongside another species, having long since died out in present times. They were large, lumbering beasts that preyed on the small but intelligent zanni. The zanni had very little forms of offense, and had developed an odd but sufficient defense against their predatory adversaries- the zanni would tap into their primitive sense of humor to make a quick escape while the beast would be too busy laughing. The funnier the zanni were, the more likely their escape would be. However as time would pass, so would the humor of the beasts grow to become more and more picky. Jokes and acts would become more complex, else the zanni would be eaten by the beasts. For a period of time the zanni were completely subservient to the beasts, being treated as royalty as the humble and weak zanni would be forced to perform or be eaten for sure.

What happened to the beasts is not well recorded in zanni history. There was mention of transgression against the beasts, mayhaps even a war. However according to studies, the most likely turn of events was the beasts may of accidentally thinned out their population due to their own greed. The more zanni serving under a beast the more prideful they had become, and many simply starved due to the refusal of eating their main food source. As the last of the beasts would die out, the zanni no longer had anyone to entertain. Thousands of years of evolving to fit such an environment left the zanni lost and confused with only each other to show their acts to.

However, technology would peak soon after the death of the beasts, and the zanni eagerly reached out to the rest of the universe to show off what they were capable of.

Pierro-Zanni: Pierro-Zanni are significantly different from their cheerful cousins. This type of zanni, rather than being the happy go-lucky performers that the common form of zanni are, pierros are seen as heavily depressed and constantly let down by the world around them. However, this is entirely normal behavior for pierro-zanni to act as solemn and downtrodden as possible. It is just as entwined into their natural state of being as it is their ongoing, perpetual performance to be as miserable as possible to make others laugh at their misfortune, or feel better about themselves. Peirro-zanni do not hold resentments towards others make light of their self induced sorrow, and rather immerse themselves in it.

Their relations with the normal zanni are completely passive, as a matter of fact the common form of zanni seem to be completely enthralled by their odd ball cousins. Despite seemingly speaking completely different types of languages, they understand each other perfectly, theoretically through body language. While the pierros act put off by the antics of their opposites, it's only a part of their own acts and don't actually mind the company- as they too depend heavily on social interaction. A pierro-zanni may even partner up with a normal zanni as a part of a comedic duo. Solo preforming pierro-zanni are not hugely poplar are are much more of a niche market. The acts and performances of pierro-zanni are highly preferable to oomn communities, due to similar interests.

The pierros come exclusively in shades of blue(with the exception of their noses), often in darker and duller shades to add to the overall mood they portray. While zanni in general are incredible diverse in body and patterns, pierro-zanni are more likely to be squat and short, and all have the same tear like markings under their eyes.

Panto-Zanni: The panto-zanni have more in common with normal zanni than the pierros, and yet are even more different and strange in behavior. They are incapable of making any kind of vocalizations, and must use sign language to communicate. To make up for being entirely mute, panto-zanni have a very low level form of telekinesis, and are able to form invisible objects with their mind for a short window of time. These objects are relatively simple, most commonly being boxes, spheres, and walls. The stronger the telekinetic ability of the panto, the more pressure and brute force these objects are able to withstand, as standard panto-zanni use them as a shield to protect themselves from enemies. These invisible objects also play into their performances, miming gestures and actions to draw attention from others.

Normal zanni and pierro-zanni will often have great difficulty understanding the actions of panto-zanni. They're the only predatory type of zanni, luring in the interest of animals before pouncing on them. They're also highly solitary, not feeling the need for constant validation and social interaction. Panto-zanni are always black and white in coloration, for the exception of their nose, and will more likely have a striped pattern on their bodies. The ends of their fingers are tipped black, and have a specialized organ in them to help shape and form invisible objects.

Harlequinade: Extraordinarily rare, and only recently discovered, the harlequinade are the hybird of all three types of zanni. In the case of a naturally occurring hybird, the mother must be roughly 10% panto-zanni and 90% normal zanni, while the father is 80% pierro and 20% normal zanni. Even with the right percentages, a harlequinade is very difficult to achieve as zanni hybirds are often born sterile. Only three separate occasions have been record of a harlequinade being successfully produced naturally, however more have been successfully recreated in laboratories.

By no means are harlequinades a healthy, stable hybird. These hybirds seem to carry a sort of 'aura' around them, that causes all organic beings to perceive them as being impossibly hilarious. The harlequinade could be doing any action, and with the exception of robotic beings and other zanni, no one will be able to contain their laughter, to the point of needing to be removed from the room so they may breathe. When inquired about what they had found so funny about the creature, they have trouble pinpointing exactly why they felt such a way. Other zanni on the other hand do not seem to understand what makes the harlequinade so different from normal zanni, and claim that they were just doing their usual performance. Due to this strange and not well understood ability, harlequinades have been made illegal on most, if not all planets.

Harlequinades have relatively the same body builds of normal zanni, but with some important different features. They are extremely large, being 10 feet tall at the bare minimum. They have three different faces, the one to the left is always frowning sadly, the one to the right is always joyful, and the middle is always neutral. They may take turns speaking with different mouths, depending on what emotion they are trying to portray. They do not seem to crave attention like normal zanni, in fact they are rather oblivious to how they effect the world around them, wandering through the world as if perpetually lost.

Hammer Space: Zanni take up very little space, due to their extremely elastic and collapsible bodies. Therefore, two or three zanni, depending on the room they're kept in, will only count for one person occupying the space. A zanni can also be reasonably stored within a container larger than it's head, up to a few hours at a time.

• Zanni language depends largely on which subspecies they are. Normal zanni speak in honks, squeaks, and chuckles. Pierro-zanni speak in sniffles, soft sobbing, but share the honking noises. Panto-zanni speak exclusively in sign language, and will mime actions to get their point across. 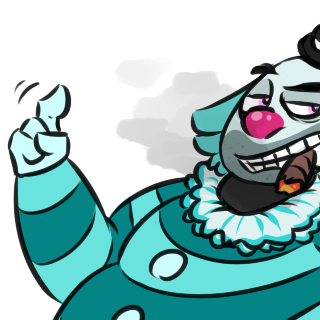 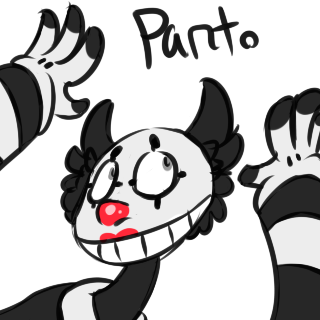 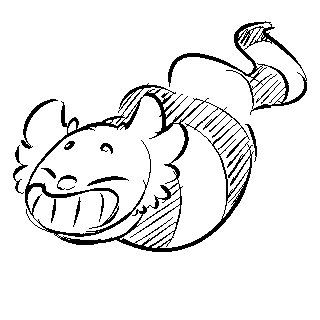