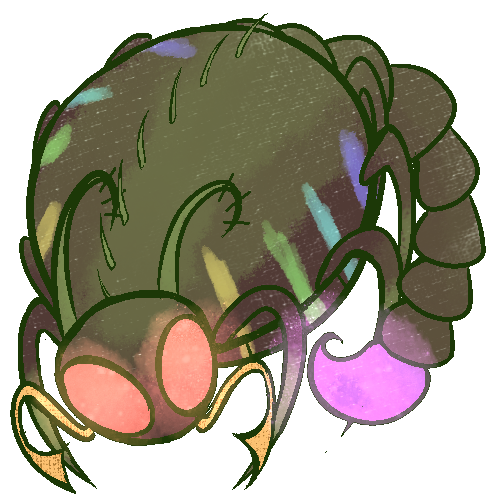 “She's always been the perfect patient, never struggling at all. Dissecting her always helps me cheer up after a long day. nvn” — S-6026 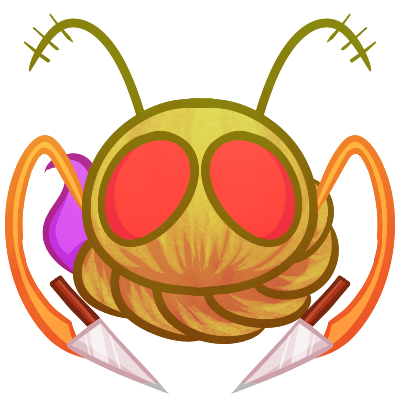 Attack Method: Cratics don't typically get attacked, as their bright coloration marks them as poisonous. However, if something comes after them or their child, they will quickly sting it or, if their venom sac isn't done regenerating, will rip it apart with their front claws.

Cratics are, in a word, chunky. They have an insect-like head with large eyes and a pair of antenna, as well as a massive body with needle sharp spikes along its back. In addition, they have a long scorpion tail which they use to incapacitate their prey before killing them. Their blood contains a mild toxin as well that keeps mosquitoes and fleas from bothering them, but isn't enough to significantly harm anything bigger.

They have ten legs, six in the back, two clawed legs in the front, and a pair of thin scalpel-like arms that are always brightly colored in contrast to the rest of the body. These scalpel arms aren't nearly as strong as their other legs, but they make up for it by being incredibly sharp.

Cratics are generally a green-brown color with bright streaks of color along their body, as well as on the tip of their tail. These places, plus their scalpel arms, are capable of bio-luminescence and shine brightly in darkness.

Their tails and scalpel arms have specially selected amputation points. In a pinch, they can be easily severed with minimal blood loss.

Cratics are capture creatures, and thus were specifically bred by notails to be ideal for taking care of notail children once they're set out into the forest to fend for themselves. As such, they have a number of features that help them train X and S-class notails to be productive members of notail society.

Cratics are conditioned to see the notails given to them as their children, and so treat them the same way they would treat their own young. And the way cratics feed their offspring is by consuming a large amount of food, storing it in their storage stomach, and allowing the children to cut them open and pluck the food out to eat. However, because cratics are able to quickly heal any injuries they sustain, this does not cause them permanent damage; all they need to do is wait for a short period of time before the wound will be completely healed. Thus they can be opened up and put back together again as often as needed.

A cratic will generally only feed its ward every two to three days, as this is how often cratic young feed. Cratic young also have a habit of overeating until they're sick if given the chance, so no matter how much the notail child may say they need more food, the cratic will never listen even though they're on the more devoted and attentive end of capture creature temperaments. As a result, they're forced to hunt while still being given regular opportunities to practice dissections. However, if the child doesn't feed from them whenever the cratic presents them with food, it become distraught and will not allow them to leave its side until they do. This trait means that no S or X-class child can become so good at hunting that they can avoid learning to perform surgery.

The toxins in a cratic's blood do keep away mosquitoes and other pests, but it serves a second purpose; it forces the notail children dissecting it to be careful not to get blood on the meat they're extracting, as although it will not kill them, it will cause discomfort for a few days as they lack the cratic's natural immunity. Thus the children develop steady hands during surgery. But this is only one of numerous things they have to watch out for, as there are a number of ways these dissections can go wrong. In a worst case scenario, the cratic can even die. In order to get the tools they need, the notail child severs the cratic's arms at the amputation point, obtaining a set of scalpels. They generally need to replaced regularly if the notail has no means of sharpening them, but since they quickly grow back anyway, this is not a problem. Occasionally it becomes necessary to sew something back together, in which case the needles on the cratic's back can be broken off for use. This situation usually comes up if the cratic loses a non-scalpel limb, which will not regenerate, or else the tail, which will regenerate but do so slowly. Notail children can also take this opportunity to remove the venom sac from the tail to use for their own purposes, as it will grow back within a few days if the tail is reattached.

Overall, everything about a cratic's behavior will teach its child to value dissection for their own gain above all else. X and S class children during this period tend to have very little to do for recreation but dissect their cratic, so it becomes a hobby for them and they take this attitude into adulthood when they start getting actual test subjects/patients.

Though the cratic genuinely loves its notail child, the way the notail is taught to dissect it for survival fosters a lack of empathy, as well as a willingness to operate on anyone - leaving them viewing their capture creature as little more than a simple subject.

Fast Regeneration: Cratics heal incredibly quickly from all wounds. If they're cut open, they'll stitch themselves back up, and even if parts of their carapace are removed, it'll grow back within half an hour. As it is also very sturdy, this means that the cratic carapace is useful for building material, and is often used to create shelters. It is because of this that they make such perfect capture creatures for S and X class notails. Their tail and scalpel limbs will also grow back if removed.

• Young notails often use their cratic's glowing tail as lamps for night surgeries, in the event that they need to reattach something and it can't wait until morning.

• In the past, the toxin in the cratics' blood was enough to kill nearly anything that could attempt to bite it, but once they began being bred for use as capture creatures, they were carefully selected until the blood was only a mild poison. However, the venom sacs in the tail were left alone.

• Notail children often coat themselves in cratic blood to ward off predators or parasites like fleas.

• Cratics have weak mandibles; the purpose of their scalpel arms was originally to help them cut through flesh and carapace to get to the meat. 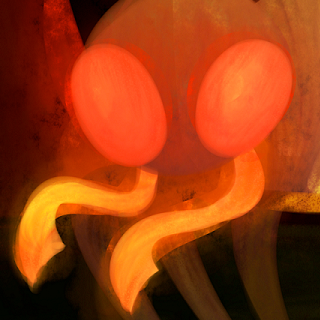 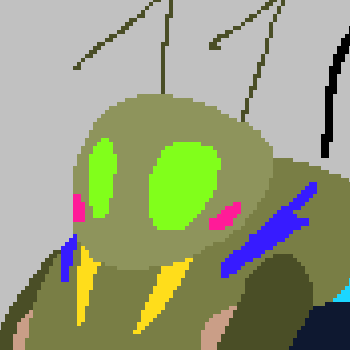