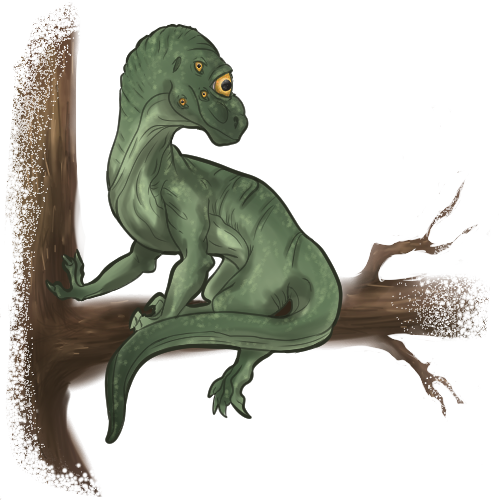 “Oh, these guys? Yeah, they're pretty great! Put up a fight that most losers can't!....not that one, though... or that one.” — A hardy, wealthy polydextrol owner 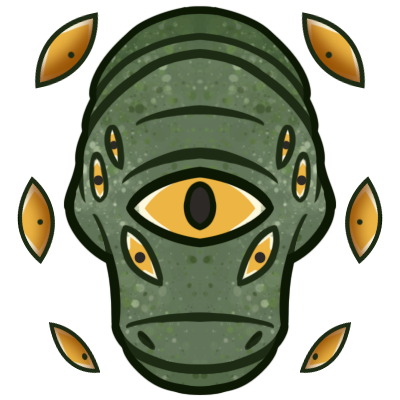 Attack Method: If possible, a polydextrol will leap upon its target from above and use its jaws and claws as weapons. If this is not an option, they will resort to slashing, teeth, and swinging their heavy tails for motion and bludgeoning seemingly without tact.

Polydexrols are capture creatures, bred and modified for the use of notails. Specifically, the R or Z-classes, and sometimes V-classes.

Polydextrols are large, reptilian climbers that come in shades of green and black, though it is more often than not a mixture of both. They are quadrupedal with five clawed fingers on their forehands, three in front, two thumb-like ones on each side, and four-fingered back hands attached to arched legs, that depending on their environment, could be webbed. Their skin is leathery and rough on the top with a smoother underbelly.

These reptiles can have around five to nine eyes, one large one on the center of the face while the others are smaller and appear to be scattered around it. These surrounding eyes can end up almost anywhere on the face, even on the jaw and forehead.

Height wise, the average polydexrol only reaches approximately three feet, lengthwise however, they can reach up to seven.

Despite their plentiful amount of eyes, polydextrols have been genetically altered to rely on their keen sense of smell and hearing which, due to the side effects of selective breeding, resulted in near-blindness.

These animals are also prone to random fits of rage or fear, and if not quickly pacified by their owner, their sense of smell will shut down, hearing dulled, and their eyes "reactivated", suddenly they are able to see with far more clarity than ever, thanks to genetic tampering, thus scaring them further. It is strongly inadvisable that anyone other than the owner or caretaker approach a polydextrol in this state, and even then, injuries are probable. If repeatedly calmed, a polydextrol become easier to pacify as the years continue, as depending how often the fits occur, the polydextrol will recognize that their sense of smell will return the faster they comply with their owners. It is the job of Z-oologist notails to calm them down and the R-angers to hide, as a polydextrol will actively search for a source of comfort or a target to slay, depending on how it's feeling. Outbursts can last from ten minutes to three hours if left on their own.

Most polydextrols also enjoy rough housing and small games to pass the time. Hide-and-Seek is an all-time favorite, and the owners do not get decide when the game starts or ends. Signaled by a crackly roar, the game challenges young notails to disguise their scent, keep quiet, and to move stealthily, as these creatures do not leave any land unchecked. The end is celebrated with a play fight.

In the wild, polydextrols climb trees, practically sliding along the trunks with the support of their hands and smooth bellies while they do so, spreading their weight across the sturdiest branches. Their prey varies in size, spanning up to twice the predators' mass. They often close their eyes during hunts for camoflage and fewer distractions, as their poor vision is only for close encounters. They are not the most graceful of hunters.

Polydextrols are born with thin, fin-like gliders in order to leap from tree to tree and branch to branch with ease. The gliders become too small for any use at about 15 years. Only the species' young eat bugs and quickly become independent from parental care, but will still need guidance from either their owner or a parent. Even older ones will need assistance hunting, whether it comes from others of their species or their caretakers.

Bog Polydextrol: These polydextrols are better suited for wet terrain. They have webbed feet and a greater lung capacity for swimming and hunting for prey that dwells underwater.

Domestic Polydextrol: These polydextols are for more domestic purposes. They can be found in smaller or larger than average sizes depending on the buyers' preferences, and their sight is a little better than those bred for notails. This makes their outbursts less intense, and the warning a bit more prolonged. Overall, these polydextrol are only for the better-off owners who can afford large spaces and climbing equipment.

• Signs of outbursts include: Restlessness and fidgeting, erratic breathing, and eye-twitching.

• It is helpful to be sure that a polydextrol knows a familiar sight or sound before any outburst.