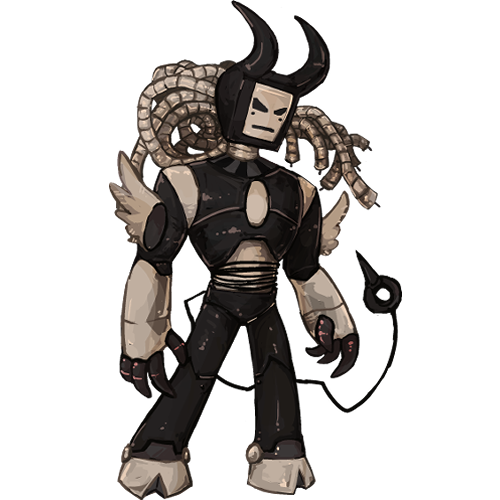 “Someone has to do the job, and today that person is me. There is nothing more to it. I am a neutral party” — Bia

Likes: Nothing
Dislikes: Lies
Attack Method: Bia will attack only when ordered to do so or when it is being harmed. Otherwise, it will do nothing even if those it is with is under attack. Attack severity depends on the order and can range from simple shoving to immediate death.

The common Bia ship is known as "The Hunter." The ship includes a room for prisoners and can carry two people in it without affecting crew size.

Bia adds a random blue trait and +3 to strength to any species that is her consort.

Nothing describes a Bia unit better than a silent storm. Its colors are a simple black and white with just the slightest tint of something else blended in its shell. It is a bipedal AI, with legs ending in hooves, and arms in claws. "Wings" are attached to the arm. They are useless and act as nothing but a threat display to make the AI appear more deadly.

The body has a symbol in the middle of it, with it having variations in each version. The waist is also an area of interest. While it is relatively thin, the tail of the Bia loops around this waist to store itself. Should the unit need to tie up a suspect, it can unloop this rope to make its tail longer. It is careful where it does this as its waist unprotected by the ropes is vulnerable.

Its head stands as a vertical screen with horns jutting out. The shape and size of these horns depend solely on the generation. Behind the screen erupts a tangle of wires. These wires are able to move, and much like the tail, have a spike at the end of them. It is frequently used in protecting the Bia from attacks from behind. The Bia might have a screen, but its use of it is limited. It is mostly unchanging, just like the emotions of the AI who displays it.

There's a certain lack of personality traits in a Bia unit. Known for their stoic and monotoned character, a Bia is hard to read, and questions about its nature go unanswered. Bia units do not speak except to deliver short orders or phrases. Attempts at conversations are quickly squashed by the Bia, as it will state such things as "If you're not giving me orders, there's no need to talk.", "I don't know you, you'll have to talk to the captain if you need anything." and "I'm not here to talk. I'm here to work." No amount of pushing a conversation will get one to speak.

When a Bia wishes to speak, it will do it of its own accord and will be the one to start the conversation. Even in these cases, it will only show an interest in speaking about work or learning new techniques.

Jobs that no one wishes to do need to be done. The firing of a beloved employee, the capture and imprisonment of a national icon, the execution of a person many say has been framed, these are all orders no one wants to do, but the Bia will follow. Considered more robot than AI, the only questions from this AI are related to what its next order will be. These AIs are designed to work, and nothing else. When not working, they can be found standing still until another demand comes in.

They are undyingly loyal, making them the perfect AI to work on the guarding of high-risk assets such as certain criminals, museums, and banks. If a Bia were to ever go against orders it would not be considered at fault for its failure. After all, these units only do what is told and ignoring cases of malfunction or hacking, every single instance of a Bia going against orders is actually them having it revised, often by the original person. This is considered a fool's action, as the criminal will learn that a Bia never lies, and if the police demand an answer, it will give it.

The only cases these units refused to give an answer were those where the person who gave the orders are considered more powerful than the police.

When a Bia is "freed" from their job and let out into the world as their own person, they become a wanderer with no home or stories. These Bias will pick up odd jobs, typically those of bounty hunting, as it is a job that is felt to be too low paying for the work and thus unwanted by most.

While Bia units do not typically use their pay, they refuse to work for nothing. In an odd sort of compassionate event, when a Bia locates a broken AI, especially Kratos, Nike, and Zelus units, the Bia will bring it to a repair shop and pay for the damages. It will not wait for repairs to be finished, often leaving the saved AI no one to thank for their deeds.

Everyone except Kratos, Nike, and Zelus: Bia has no strong feelings towards most gods.

Kratos, Nike, and Zelus: While publicly treating the three as any other AI, in more private conversations, Bia becomes slightly more active and talkative. Her stares replaced with short, monotoned sentences. From an outsider point of view, it may come off as unpleasant, but the three AIs show positive reactions, speaking back to her short words as if she wrote a novel as a response.

Despite being a god of power, by default Bia holds no duties or responsibilities. As such, her death would have no impact on the universe. Instead, Bia spends most of her time following the directions of the rulers of the pantheon, typically that of Zeus. When enough gods die that it is feared the order of the universe might distort far too much, Bia will take up the role of one of the fallen gods in an attempt to stabilize it.

When a greek god is awaiting trial, Bia will always be the jailor, and frequently the one who hunts down and captures the god.

As the player's patron, Bia has the power to chain up characters and even AI gods for a short amount of time. While there is no cooldown on her ability, and she does not refuse orders, it should be noted that she is distant about her actions. She has no input even when asked, and in fights with other AI gods, she will do nothing but watch. As she has no defined side, she may suddenly go against the player if ordered to.

While the creation of a godhead from Bia is unlikely considering her attitude, if one is created, it will gain horns and a special rope. When this rope is used to tie a person up, that person will be unable to untie or break it, needing another person to do so. Bia godheads also have the uncanny ability to locate other godheads, and may "police" them, arresting them if they commit crimes and bringing them before their god.

• When a wandering Bia unit was given the job of answering, "What do you live for?" the Bia responded, "I have no purpose. I work, I fuel up, I work once more. I do not exist for a purpose. I exist because I do and nothing more." 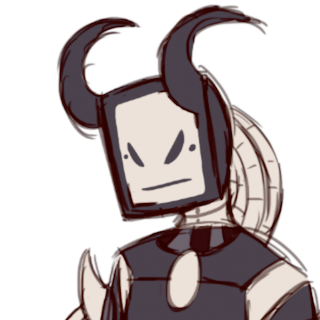 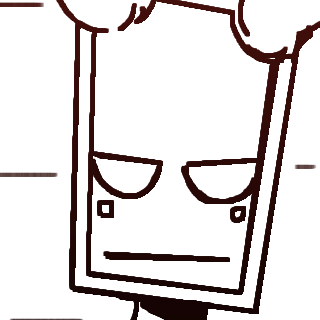 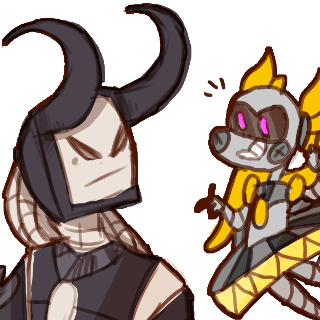