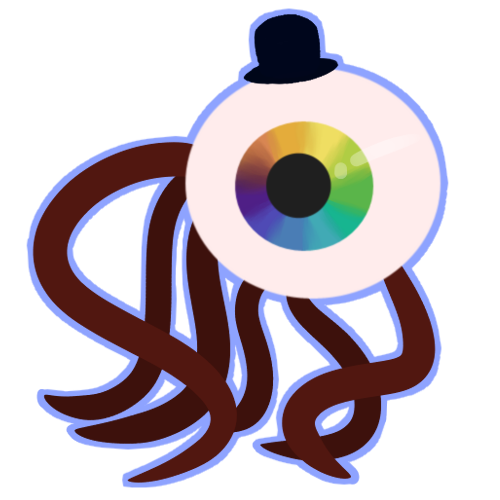 “I feel like I'm being watched...probably by that giant eyeball over there.” — Some guy

Looksies are large disembodied floating eyeballs. The come in a fairly wide range of sizes, from half a foot, to nearly two, but most are found at about one foot or so. They have anywhere from three to seven tentacles that sprout from their backside, which generally just trail off behind them or hang under them. These tentacles can be used for physical tasks, but they're very weak and thus ill suited for that sort of thing.

They are white, and their irises come in essentially every color of the rainbow except red or violet. Their most peculiar attribute is their fondness for small accessories, such as hats, ties, and the like, and it's rare to find one isn't wearing something. Looksies are generally found floating at least two feet off the ground, and they generally drift about. They lack mouths, and don't appear to need to eat or breathe, so they often go about floating in the vacuum of space.

Looksies are aloof and weird creatures that just float about looking at whatever attracts their wandering gaze for however long they feel before moving on to something else. Occasionally they'll "attach" to someone, following them obsessively. Being as they are immortal as far as can be discerned, this generally means the person only has the option of killing them or dealing with their silent stalker for the rest of their lives.

That said, looksies are largely harmless and generally don't do anything to hurt or inconvenience people, so long as you don't consider voyeurism inconvenient. But, if they feel threatened or provoked, they will retaliate decisively, firing their "deadly eye beams" at the threat until they feel the threat is incapacitated.

Evil Eye: Evil eyes are are an ominous and strange subspecies of looksie. They are black in color, with either a red or violet iris. Evil eyes are believed to make someone incredibly unlucky, with even their passing gaze causing unfortunate events to happen to those they pass upon. Those that are stalked by an evil eye generally have no end of misery or misfortune come to their lives.

Deadly Eye Beams: Despite the name, deadly eye beams are not, in fact, deadly. The exact effect of the eye beam varies from looksie to looksie; some just make you dizzy, some knock you out, yet others, make you fall deeply in love with the looksie, but only for a few minutes. The possibilities are nearly infinite.

• While rare, there have been reports that looksies which "attach" to people sometimes leave, and lose interest. There are numerous rumors and explanations for why this is and how one can get a looksie to leave you alone, but truthfully, no one knows why this happens.

• People are usually "uncomfortable" with being stared at by a giant eyeball. The fact that they generally don't do anything is generally reported "creepier, if anything."