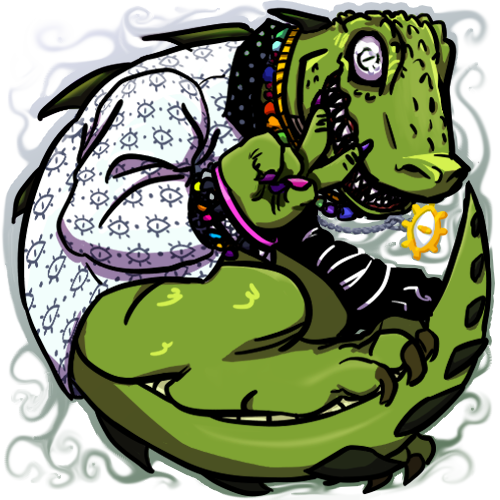 “Yeah, they're a marsue, but their vids are so funny, and their relationship with that anomaly partner they have? Adorable! They're certainly messing with my mind, but it's not cause they edited it!” — A regular KisosKissingCorner viewer

[Show-off] Neutral trait
This character boasts about their skills, and often want people to watch them do things to show off how good they are at it.
[Habitually Liveblogs] Neutral trait
This character has a specific habit they do in certain situations, such as biting nails or auditory self stimulation.
[Popular] Positive trait
This character is popular around others and tends to know just the right words to use in a situation. Characters are less likely to look negatively on this character and morale raises while speaking to them.
[Passionate About Anomalies] Positive trait
The character has a strong passion for some area. They might know more about this stuff than others, or may perform better on tasks relating to this topic than someone else with equivalent traits and skills.
[Anomaly Hunter] Positive trait
This character is experienced in combat with X type of opponent and gains an attack bonus against them. The more specific the typing, the greater the bonus.
[Obsessed with Anomalies] Negative trait
This character is obsessed with something and desire strongly to attain it, even at the detriment of their own safety and well-being.
[Wanted] Negative trait
An individual or organization are attempting to track this individual down. This might take the form of a single tracker, or a widespread alert to all law enforcement in civilized space. The character may have to disguise themself to avoid constant entanglements either legal or violent.
[Liveblogger] Ability trait
This character is constantly broadcasting (or others are broadcasting) their whereabouts and happenings to an interested audience. If something newsworthy happens to them (or their output drops without explanation), individuals throughout the universe will instantly know and may take action. Cooldown: Passive / or activates anytime the character posts anything.

Kisomali is an average marsue in appearance, if a little on the short and lean side. Their green scales have a healthy sheen to them, though, and their eyes (with contacts that make the iris of one eye white with a stark black border and the pupils slits, and makes the other eye's iris an explosion of color bleeding together and out with no clear pupil) are bright. Their snout shape is boxy and flat, perfect white teeth poking out from their lips. They have no hair- the scales that flare out from their eyebrow ridge and the top of their head in little spikes resemble it somewhat though.

Their outfit changes, but generally it fits a theme of being all black and white (eye patterns are common) except for splashes of iridescence like oil spills, and they always have a thousand necklaces and bracelets on in a cacophony of kinds and colors. Most wearable items fans send will also become a part of their wardrobe for a time, which they say is to show their appreciation.

When Kisomali started the channel they were only 4 feet tall including tail. They are now 7 feet and growing.

Kisomali is a kinetic speaker, always moving. Their eyes are bright and their teeth flash, and their every word, at once practiced and off the cuff, professional without feeling impersonal, seems to say "I'm your friend". They draw you in and don't let go, highly eccentric in a way that's magnetizing. They're funny, charming, quirky, and they pull daredevil stunts with dangerous creatures with a smile on their face.

Their passion for anomalies, verging on obsession, is no act, and the way they talk about them can make you care about them vicariously through Kisomali. Kiso sees themself as a strange and blessed (or perhaps more aptly wishes they were blessed) being, and for this reason says they feel a kinship with anomalies, and also that they love them, and that it is their duty to romance every single one. It's baffling. It's hilarious. It's strangely admirable.

All of it is almost enough to make you forget they're a marsue.

Over a couple years now of posts and videos, Kisomali has made thousands of claims about details of their life, contradicting themself constantly and making statements that quite literally could not be true. The only constant is they say they are unable to control their mind editing power, either because of a birth defect or injury, and while this has not been verified it might explain why Kisomali is far more driven than marsues usually are. They have to actually hunt for their prey.

What's more well known is their history after appearing on NoTube, with a video that immediately made a stir not half because it included a marsue brazenly disregarding the law. Even more brazen was what they did in the video: kiss an alleged demigod smack on the lips. (Kisomali has since been banned from Don Wilmack's Wacky House of Wares.) No one could believe it. Then at the end of the video, they asked the audience to vote on what to try to romance next. Every time people were dubious and certain this was suicidal, every time Kiso actually went through with it, and people realized Kisomali was serious about this. Their statement that their ultimate goal was to kiss the Neo only made the internet and their audience explode more.

Most of the appeal of their channel is the stunts they pull. But there is also Adeve.

Early into the channel, suddenly there's a new face, or more a voice. Kiso wasn't the one working the camera, and sometimes Kiso talked not to the camera but the one behind it, and a soft spoken voice would reply, the two not so subtly flirting. Its weird sometimes, but for the most part its sweet, and viewers lap this up. Eventually, with a lot of pushing and support from Kiso, the mystery person shows zeir face, and for the first time Notube is graced with Kiso's long time sweetheart: Adeve. Zey are a blessed putley, and zey are not exactly beautiful. In fact, zey are deeply unsettling to look at, with zeir thousand constantly shifting eyes that open and close and open again as oozing gaping holes (the only eyes that don't change are zeir main ones, which are glued shut). But the person zey are is so pure and kindhearted that zeir appearance can be, if not totally ignored, then at least overlooked. Kiso and Adeve's personalities and the way they interact in liveblogs and during filming the next daring romancing attempt make up the rest of the appeal of KisosKissingCorner, and there's speculation Adeve does a lot more for their success then just act cute. There has to be a reason why, despite the channel being so popular and always saying where they are, no one has been able to find Kisomali.

The danger Kiso poses until they have been caught cannot be overstated; fears over the effects of Kiso's channel romanticizing anomalies were not unfounded. Since the start of KisosKissingCorner research has shown that 50% of their viewers will be involved in limbo worshipping or an anomaly outbreak/creation, a percent which is still rising. Notube admins have been working tirelessly to try to delete their account, but all have reported back that when they went to find their channel to remove it it wasn't there.

Anomalously Untrackable: Despite posting liveblogs showing exactly where they go, no one has been able to catch them. There's question if being impossible to find is a power they personally have, or if its the doing of someone Kisomali works with. Whatever it is, any attempt to find Kiso when Kiso doesn't want to be found has ended in failure.

• Despite the warning about marsues and Kisomali specifically, Kiso has been known to set up meetups with their biggest fans and posts videos about said meetups. There's been stirrings, theories that these are ways to get prey in range of Kiso's teeth, but it can't be proven. There aren't any people in any of the videos posted that weren't around after, after all.

• Authorities attempted a massive sting in an attempt to capture Kiso, in which over five thousand authorities swarmed a planet and instated a planet-wide shutdown to prevent their leaving. The planet has now been deemed Lost, and attempts are still being made to find it. Meanwhile, Kiso released a liveblog on a system half a galaxy away.