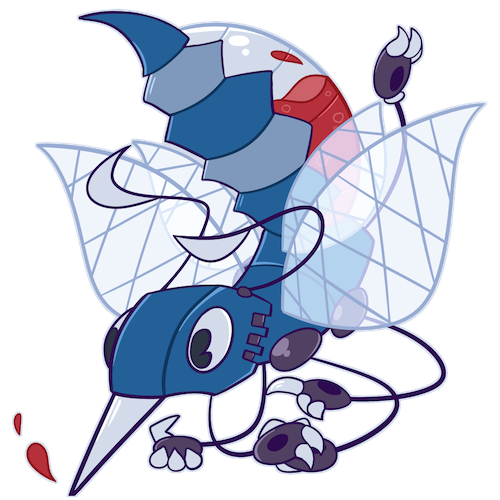 “Look I'm just not into the idea of a giant mosquito delivering wine to me using its.....abdomen. Can I get it right from the bottle or something?” — Comment overheard at a wine tasting event

Likes: Fancy drinks, Food, Dinners, Social events, Being full of liquids
Dislikes: Being shaken up, Blunt objects, People scared of needles, Pests, Cheap wine
Attack Method: When attacked Bibesia units will attempt to flee. Should that not work they will try to sting the attacker with their large proboscis until the attacker is scared away. In the direst of cases, they will be forced to eject their liquids and start sucking out the blood of the attacker to force them to stop.

The common Bibesia ship is called "The Bar" as many ships are allowed to dock and come on board to drink while traveling. The Bibesia ships have their own brewery on board. The ship also has a bigger than normal fuel tank for its size to sell fuel to stalled ships in space.

Bibesia gives her consorts the power to consider special drinks, such as soups, wine, and health potions as a generic ration as opposed to a side consumable.

Appearing as a pest, many who do not know what a Bibesia unit usually comes offering may brush them off, but those who know the joys of the Bibesia unit will happily take them up on their offer. Bibesia units appear as mosquito-like robots, including the inclusion of their iconic proboscis and abdomen. As a Bibesia sucks up liquids, it fills up into the abdomen where it is held in a temperature controlled environment. To release the liquid, a Bibesia will use their proboscis or rear to eject the liquid.

Using their four plus wings, they are incredibly agile but also extremely precise. Bibesia units are so good at stabilizing themselves that they can hold a glass of wine and fly at full speed without spilling it. With four arms they can keep a fair bit of items at the same time, perfect for their waiter duties. Bibesia units come in many colors and with many different attachments depending on what job they're being used for.

The Bibesia unit is both refined, and fun loving. When in a typical casual situation it's a strangely soft-spoken, but active AI. Typically Bibesia units will listen first, calculating the best way to go about speaking to someone, before whipping out their carefully planned statements and suggestions. At this point they quickly build up a friendship with the person they're talking to, analyzing their movement, speech patterns, and general mannerisms.

The reason for why they do this is because they have a substantial need to fit in. As a Bibesia unit can be working with the high class one day and at a hospital the next, it's crucial for them to be flexible with everyone. They rarely have steadfast opinions of their own, and yet again form their thoughts to the people around them. As such someone who meets a Bibesia around a different group of people may consider them hypocrites, but really the Bibesia just wants to get their job done and keep their guests happy.

Overall the Bibesia is a prime example of a waiter. On time, good flexible personality, and with tons of stories to tell.

Bibesia units are ready to fit in wherever they are placed. As long as there is at least one person to serve they're prepared to put their best face on and hand them the menu for the day. They are by far one of the easiest to pick up AI for first-timers into owning one. In fact, the people who created the Bibesia AI had wanted an AI that didn't need an extensive booklet on how to care for it and what one could not and could do around it. They wanted an AI that self-sustainable and generally could fit into any situation.

While longtime collectors of AIs find the Bibesia a dull addition to their collection, everyone else is quite fine with them.

The typical job of a Bibesia is being a server. They take orders, bring back food, help with prep if the staff is short, and of course, they pour the drinks. They will greedily sip up liquids and pour them into the cups of guests using their proboscis or abdomen. Most guests prefer the former over the latter.

Outside of waitering the other job many Bibesia units are seen are in medical care. While it isn't their preferred employment, hospitals have learned that with the right tools Bibesias can be amazing carriers of donated organs and blood to other hospitals in the same city. As fast as a fair number of land vehicles and able to skip out on bumping into traffic the Bibesia AI makes sure that urgent care gets to the hurt just that much faster.

Liber: Bibesia considers Liber her boss and is always waiting for orders from Liber. Both her and Liber are extremely interested in drinks and will be seen showing off their newest creations to one another.

Edesia: Bibesia considers Edesia one of her best friends and loves to hang around her. Both of them can be seen working together as Edesia is the god of food, and Bibesia is the god of drinks. A dinner party without one of them is a sad meal.

As a god of feast, Bibesia proceeds over food items, specifically drinks. Without the existence of Bibesia and other feast gods the drinks of the universe may start to have randomized effects, or effects not intended for them. Certain liquids may also spawn in the wrong places, such as wine coming out of people's faucets instead of water.

As the player's patron, Bibesia will be able to list out liquids in a given area and what direction they are in. If told to hone into one liquid her range of detection is even higher and she will play a beeping sound the closer the player's character gets to it. This can be immensely useful for drilling for fuel or finding water on a deserted planet.

Bibesia godheads can't help but dress as waiters no matter what their job is. These godheads have sticky fingers and never drop an item out of clumsiness or being shaken around. They are also gain an extra stomach that holds nearly any liquid. They can spit back up the fluid as a weapon, or even as a refreshment. The liquid will be in a prime state despite being held in a stomach, but many find themselves rather squimish about drinking something that came from someone's mouth anyway.

Bibesia units can hold a liquid in them, typically without it spoiling any faster than it would in its standard container. They can shoot out these liquids from both ends of their bodies or pour it for a fancy dinner.

• The proboscis and abdomen of a Bibesia unit is removable and replaceable. Bibesias who are looking to drink up and store particular items, such as acid, will get themselves fitted with attachments that allow for this.

• Like their counterpart, the Edesia AI, the Bibesia AI feels the need to drink liquids but is never relived when they do. As such Bibesia units are eternally thirsty. Most Bibesia units can control themselves but some drink until the pressure in their abdomen is too high and it shatters. 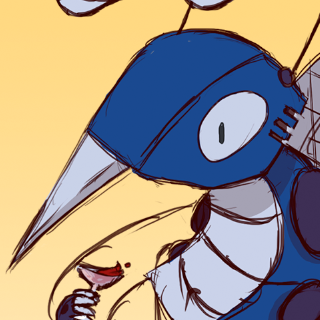