Prophet of Rust and Flesh 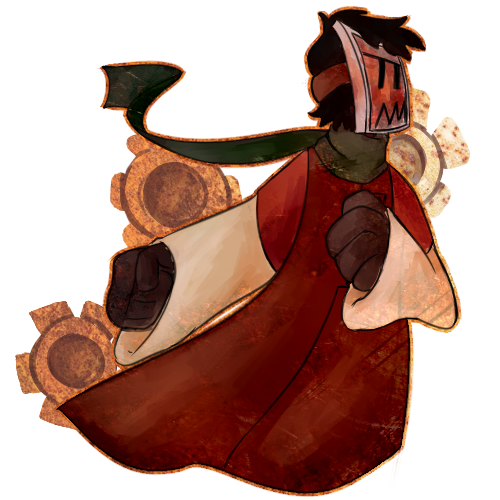 “The slaughter, the abominations, the deaths - they're all just sacrifices to be made for the cause. The truly irredeemable never believe they're the bad guy.” — Kiala Jaricha in 'The Death of Harvest'

Leon is a relatively tall example of an oomn, who covers his face with a computer-screen mask. This mask, made of rusted and dirt-covered metal, has two vertical eye-holes underneath a horizontal slash, and a jagged mouth cut out and painted. Leon's skin tone is a dark slate grey, and his unkempt, lank hair is even darker, verging on completely black. He is occasionally identifiable even without the very unique mask due to almost always wearing red and cream floor-length robes, and a dark green-grey scarf around the neck.

Metal objects in the vicinity of him have been observed to rapidly tarnish, leading to his nickname. As a result, he frequently replaces his mask to prevent it from completely rusting away. The reason for this is unknown, but it has added to the sense of mysticism around him that enables him to rapidly assemble his cults.

Leon is a being driven by what he sees as a vital, pressing cause. He is forever haunted by whispers and flashes of a great horror in the future, and believes that there is a coming cataclysm of terrible magnitude. The only way for life to survive this coming is through the ultimate unity - conversion or amalgamation into the form of clockworks.

In person, he can be irritable or even aggressive to those uninterested in joining his flock, as he simply doesn't understand how people can't see the importance of his mission. Leon is, however, not given to personal sacrifices or unnecessary risk - he'll abandon his designs, his cultists, and plans if necessary to avoid the risk of capture. He sees no longer being able to carry on his works as the greatest threat. However, in the actuality of disaster or death, he has been observed to show no fear or hesitation, even when staring down the barrel of a gun.

He is given to speechcraft, the art of persuading the other, working the crowds, and playing off people's emotions and frustration. When he arrives at a likely location, he will befriend and convince people of his cause, founding a cult. This cult will recruit and grow until either its true nature is discovered by authorities and it is shut down, or it is widespread enough that a clockwork infestation is started and rapidly grows through the members, willing or duped.

Leon is currently believed to have originally been the Callidcaeb politician, Leonid Horolo. Horolo was reported missing nearly twenty years before the first sighting of Leon the prophet, a believed casualty of the catastrophic destruction of the ISV Colossus, an infamous tragedy in which an asteroid collision with the gargantuan cruise liner caused thousands of deaths and a deadly crash on the surface of the abandoned planet below. It is unknown what events occurred between then and his re-emergence to impart on him this radical new world view and goal, but Leonid shares little to no known positions with the prophet.

Two decades later, the first confirmed sighting of Leon was made, as he formed a cult around his preachings of a "New Coming" on the world of Harvest. Precise records of both the cult and events following this are unavailable due to damage to the planetary communication network, but a major outbreak of clockwork infestations is known to have resulted in planet-wide riots, ultimately resulting in a near-complete purge of the doomed planet to avoid the formation of a planetary-class clockwork entity.

While the current whereabouts of Leon are unknown, in the time since Harvest he has been assumed or confirmed responsible for a multitude of less-successful outbreaks of clockworks, albeit still each causing horrifying mayhem and destruction. While the notails have so far largely managed to contain and eliminate the outbreaks, their severity has been growing larger and they are becoming more frequent, and the rise in catastrophe attributed to the so-called prophet has not escaped notice. Certain individuals among the notails have been taking note of the steady increase in reported sightings and are known to be hunting down Leon and his cult in an attempt to neutralise the threat he poses. It is hoped that they accomplish this before this insidious plague can continue to escalate, and metamorphose into a far more catastrophic and wide-reaching form.

If you spot this man, call relevant authorities immediately.

Speaker to the Many: Leon's oratory skills verge on the supernatural, and he is easily able to convince the downtrodden or hard-done-by to join his causes wherever he goes, even though his goals are typically against their interests. Captains are advised to keep an eye on low-morale crew.

• It has been theorized that without the efforts of the notails to contain the fast-moving and rapidly spreading outbreaks, that a major plague of clockwork would have been caused across the sector, potentially threatening the rest of civilised space.

• Leon appears to have contracted a muscular condition,as he has been unusually stiff during recent sightings in contrast to the "fluid grace" reported on Harvest. 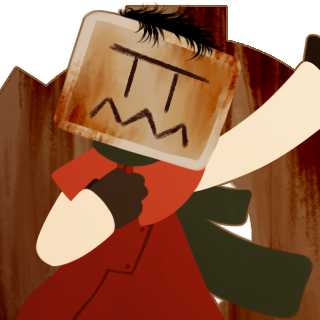 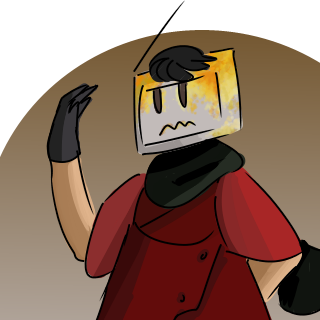