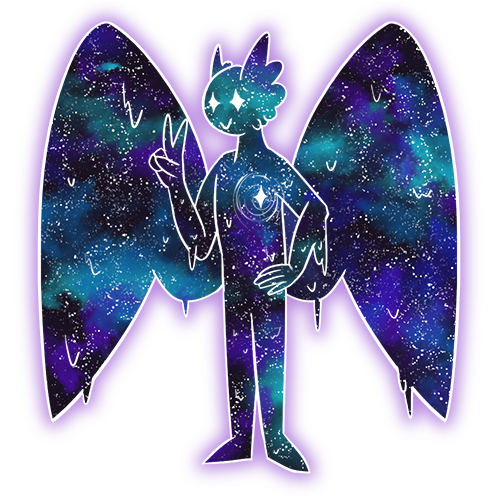 “Much better than finding a notail outpost.” — Unknown Captain

Attack Method: Disarming the opponent, whether this means negotiating or knocking the weapon out of their hand, or running away.

Stellavis seem to have used to honor the void for giving them objects, but in modern time they either honor nothing at all, or the Unknown.

Often blending in with space itself, the stellavis are a strangely avian spacefaring species. Their gelatinous yet slimy exterior is covered in patterns of nebulae and galaxies, which can be any color, but tend to be quite saturated and never solidly black, white, or grey. They are humanoid, save for avian features which can vary from individual to individual in both style and amount. Stellaves have only a pair of wings at minimum, but can be very bird like.

On every stellavis are at least three glassy formations of four-pointed stars. Two or more of these are placed on the head, acting as eyes, and one is located over the traditional place for a species' "heart." These are the most vulnerable areas on the creature as, though the stars themselves are as hard as a rock, cracking or shattering them will cause blindness when on the face, and death when on the body.

This, however, is not the only way that the stellavis are fragile. If their soft outer skin is damaged, a colorful runny fluid will "bleed" out. This may also be any hue, but will usually match one of the colors seen on the skin.

Though stellavis do not seem to have reproductive organs, or organs of any kind, they do produce offspring, which can incorporate genes from more than two stellavis parents, if so desired. When the decision has been made to create a child, it is tradition for the stellavis to create the egg in total secrecy. Too few stellaves have been observed to discover how the egg is created, and when asked about it most refuse to answer, the rest give what can be assumed to be lies.

This egg must be left to incubate orbiting around a star in the vacuum of space for a full year. To endure this, eggs have a nearly unbreakable shell; despite this some eggs are still crushed by meteors or pulled into the sun by gravity. Stellavis will naturally produce an egg even if their partner is not a stellavis, though of course this just produces a normal stellavis. Hybrids of a stellavis are only possible using a hybrid machine.

Living distant from each other in space, the stellavis create their homes among asteroids. These homes contain gemstones, which the species as a whole seems to have an endearment for, in addition to trinkets from travelers. The shape and structure of the houses vary wildly, but they are almost always brightly contrasting with the surrounding area and usually contain a nest-like bed made from assorted pillows and blankets. A stellavis is likely to be more than happy to invite any worn out travelers in for tea or at least to hear their story and trade jokes.

Because of their long life spans, jokes and stories became a form of currency. Many stellaves will gladly exchange fuel they've found in space for an interesting story or a killer joke. No matter how curious the stellavis may be about any planet, it is not recommended to bring them to one. Living so far from each other in space has caused them to tend to become extremists when they find a life form. In one case, it was reported to create a ranch for cattle simply because they didn't want them to be eaten. Similar reports include stellaves screaming about others "hurting the grass" by standing on it and crying after seeing a freshly cooked piece of meat.

The stellaves were first documented by a ship that had run out of fuel. While drifting in the uncharted area, the captain noticed a brightly colored structure and was shocked when the stellavis flew up right to the window to say hello. Since then, the stellavis homes are seen as a peaceful refuge that crops up where least expected and are frequently marked as pit stops on maps.

Angels were most likely the first to truly encounter the stellaves. Not only do the angels have a large amount of mythos about the stellaves, but the first documented stellavis spoke in starspeak. The lore of the angels often refers to stellavis as mysterious creatures of great knowledge; this information is often quite shocking to those who seek them out, as stellaves appear to be very "casual" or laid back beings.

• Though some stellavis can exhibit extreme reactions and behaviors when meeting many living things at the same time, some take it as an opportunity to live a more extroverted lifestyle.

• Stellaves can often exhibit bird-like behavior such as preening, even though their wings are made of a slimy substance and they do not always possess a beak.

• Itzels and stellaves get along very well as the itzels can recite not only stories, but entire events while keeping voices in tact, and the stellaves are glad to trade objects in exchange for this. 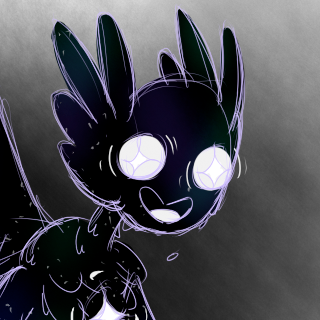