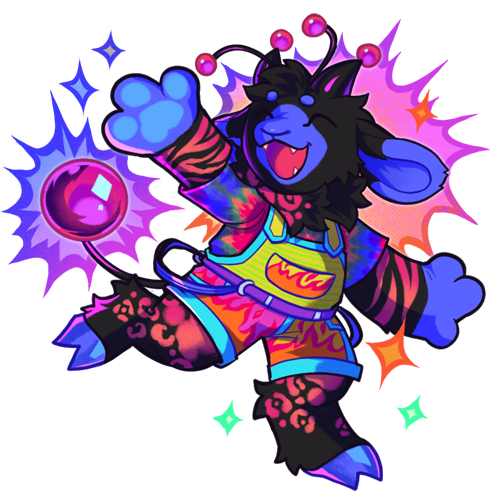 “Wowie, I sure do love eyestrain!” — A quilivian

Attack Method: They will ram into the attacker with their horns, or try to hit them with their tail sphere.

The quilivians will worship any god that they find interesting.

Quilivians have large three fingered paws and hoofed feet. They also have a short, round snout with a U shaped nose connected to their mouth by a philtrum. They have large ears and eyes, and fur all over their body. Quilivians have two short horns, antennas, and a singular thin tail, all with a sphere on each that come in a variety of sizes and hues.

Quilivians have many bio-luminescent markings of any shape and or pattern around their body. Markings are usually bright colors. These markings, as well as their horns, can change color and were originally used as a way to communicate. In modern times they are now just natural decorations.

There is no sexual dysmorphia between quilivinas. Quilivians all do not care for gender, and go by all pronouns.

Quilivians usually dress in bright and flashy clothing. It is said that you can see a quilivina a mile away because of this.

They are very loud and rowdy, and can usually be seen at parties. They love to do new and exciting things, and hate doing simple or repetitive tasks. Most quilivinas go into the field of art. They are sociable and love making new friends, even if they will only meet them once. Sometimes they get very attached to a friend, and will start to follow them around. If even hinted that they are becoming a nuisance to their attached friend they will do everything in their power to avoid them, even moving away if possible.

Quilivians are very loyal, and usually have a main club that they like to go to and will fight others if that criticize it. Quilivians that are regulars at a club are sometimes given special treatment since they are sometimes seen as good luck charms or mascots.

Quilivians used to be a simple species. They had no natural predators so they spent their days in the dark swamp covering their planet. They barely had anything that could be consider a society when a group of vaeri discovered them. They tested on them before finally concluding that they were harmless. Seeing all the new sights of the space age the quilivians fell in love with the colors and chaos of this universe. Most quilivians born after this period were not born on their home planet.

The few stayed behind on their planet becoming a subspecies that resents the others for leaving.

The planet of Darguna has nothing but dark swampland. There are only small bugs and fish that inhabit this land besides the quilivians. There is almost no other color but black and grey on this planet, and it is described as feeling empty. There are small towns on it, but those are few and far in between.

Darguna Quilivian: These are the quilivians that did not leave their planet. They are usually black in fur but have more earthy browns and green coloration. Their marking colors and bio-luminescence is more muted then their more common counterparts. They are a calm and folksy group. Ever since most of the quilivian left, this subspecies has tried to actually build somewhat of a society. Although very primitive compared to most other species, they are happy with what they can get.

• Quilivians leave their young to fend for themselves after birth. Many feral children wander the depths of the city, until they are caught and brought to an orphanage.

• Most quilivians go blind, deaf or even mute after a certain age because their bodies were not created for their nonstop partying.