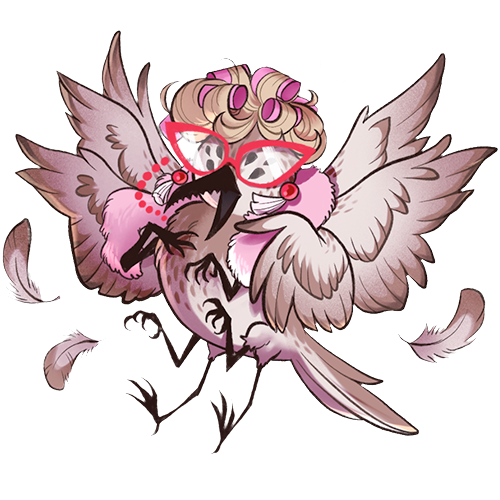 “I'll have you know that my little darling Maub is better than any of those dirty mongrels on stage, and any judge who says otherwise can shove it!” — Dandy Gris, coach of Maub on "Littlest Cuties Pageant"

Attack Method: This species attacks via pecks or summoning their pet or partner to attack.

[In The Wings] Neutral trait
This character will choose someone else to follow around and support. This is often done through pointing out chances for one-liners, giving them needed backup in a performance, or otherwise performing as an understudy.
[Inspirational] Positive trait
This character inspires those around them to do their best! Characters will do tasks better with this character around. An inspirational speech done by this character will cause morale to go way up for a whole group.
[Hothead] Negative trait
Although a character with this trait might be normally friendly, it does not take much to provoke them. If you prod at or question their beliefs, ideas, or otherwise challenge them, be prepared for them to lash out. A character with this trait can have trouble taking criticism well.

Quishidi devotion is often superficial and only done to make themselves and their partner look better.

Quishidi are small avians bearing resemblance to plovers. They have three pairs of long feet and three pairs of small wings in addition to a long serrated beak and a long tail. Around their neck region, quishidi have a fluffy ring of feathers. The colors of quishidi feathers can vary in shades of green, cyan, blue, and purple while their beaks and legs are tan.

Clothing and accessories for quishidi are incredibly common and sometimes so bizarre that it is hard to tell exactly what species they are under all the clothing. The most common outfits involve combinations of piercings, wigs, and long flowing dresses that drag on the ground. Due to the popularity of contests involving appearances, these dresses can be incredibly abstract or as simple as a small bow with a shirt.

The most important feature of the quishidi, the serrated beak, is coated on the inside with a thin layer of green venom mixed with saliva. This venom is used by quishidi to entice other species to work under them in contests or to help domesticate a fauna to work as a pet. Sometimes more than one quishidi may have the same pet or partner, but this does not last long due to their abrasive personalities gradually heightening tensions between one another.

Quishidi are very deceptive in their personality, doing their best to appear as attractive and flattering to others as possible only to burst out in anger when they get insulted or lose in a game or contest. They are incredibly narcissistic and go to incredible lengths to show off themselves, their belongings, and the person or pet they are partnered with. This narcissism results in contests being an essential part of quishidi life.

Due to the quishidi's incredible narcissism and fascination with their pet or partner, their history is patchy at best. At some point in time long before their contact with other species they resided in great turmoil on their home planet. Using their venom to entice fauna into fighting for them, quishidi ravaged their own planet with wars. While in the midst of one war, a quishidi faction known as the "Firsters" established interstellar contact and called the alien species in to flaunt the faction's supremacy over other factions. The alien species, quickly recognizing the violent situation they had been led into hastily established a peace treaty between the various factions.

This treaty was accepted reluctantly by the quishidi factions, and the vary factions found themselves with nothing to do in the absence of war. Eventually, quishidi discovered contests and soon their pets, once used for war, became something to flaunt and pamper. Some time later, other species also became something to care for and show off, and quishidi flourished into the nasty pests with a trail of crime behind them that they are today.

The quishidi since their first encounter with other species have left their home planet at such incredible rates, no one can can remember where it is or what it was called. As such, this subject is frequently brought up as a trick question in history contests. The small scraps of history left describe it as swampy and hot, as well as teeming with all sorts of fauna.

Smile For The Camera: When biting another species or fauna, quishidi can use their natural venom to give them a temporary high and a boost in charisma. This is usually only used on whatever or whoever the quishidi has chosen to establish a relationship with. Overuse of this venom may cause discoloration in the species or fauna, decrease in effectiveness of the venom upon them, as well as mood swings. Quishidi themselves are immune to the venom of other quishidis.

• Addicts to their venom capturing quishidi has led to the creation of a whole industry where quishidi allow themselves to get captured in a bid for fame.

• In a sort of poetic justice, quishidi who have committed crimes are forced to be judges for contests and be screeched at endlessly by their own kind.