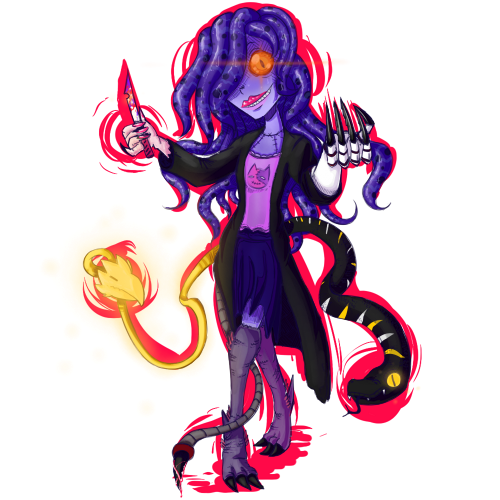 “Only cowards and weaklings care about things such as "ethics" the truly strong won't let such petty concerns keep them from the path to ultimate greatness.” — An excerpt from Selvenia's blog.

[Killer] Negative trait
This character is willing to kill in order to solve most problems, and may have absolutely no problems with doing so. This may result in a character threatening to kill people ahead of them in a line without hesitation, and following through if not taken seriously.
[Aloof] Negative trait
This character is emotionally distant. This could be natural or a defense mechanism, but either way, they come off as cold, uncaring, and unaffected. They treat serious situations with a clear detachment that makes others feel like they're not being heard.
[Selfish] Negative trait
This character usually makes choices that will only benefit themselves. While this character may have good morals that could dissuade them from choosing something that would harm others, they will think of their well-being as number one priority over everybody else. Because of this, they are less likely to share their goods or put themselves in harm's way for the sake of others.
[Creepy] Negative trait
This character commonly puts anyone around them on edge by presence alone. Everyday they are with someone, the sanity of the person goes slightly down.
[Wanted] Negative trait
An individual or organisation are attempting to track this individual down. This might take the form of a single tracker, or a widespread alert to all law enforcement in civilised space. The character may have to disguise themself to avoid constant entanglements either legal or violent.
[Ambitious] Neutral trait
This character has strong ambition for a goal or several goals. They won't be easily dissuaded from a course of action. The ambition this character holds may be for the better or the worse.
[Excitable] Neutral trait
This character gets excited easier than others.
[Augmented] Mystery trait
You're not a Quelan anymore, huh?

At a glance Selvenia doesn't seem to deviate from the standard form expected of a quelan. She is slightly above average height, and has two arms and two legs. She has a seemingly normal quelan head on her shoulders. The only immediately obvious distinction is her pale skin tone, essentially an off-white blueish color, Selvenia herself attributes this to replacing all her blood with a synthetic alternative, though this is unconfirmed.

She has long indigo tentacles, with black dots scattered accross. She has a swept "fringe" covering one of her eyes, and part of her forehead. Selvenia is usually seen in a labcoat, with something "boring" worn underneath.

Closer examination reveals more extreme differences. Her eyes are a piercing yellow-orange color and appear to be those of some sort of predatory reptile, and she possesses a third eye in her forehead seemingly taken from a drakon, typically hidden behind the "bangs" of her tentacles.

In her mouth her teeth have been replaced by those of a creature similar to a shark, and her tongue with a one that is long, black and barbed similar to, but more dangerous than, a feline's. She has a fine layer of piscine scales covering parts of her skin. At the base of her neck she has a series of ridges which seem to be gills.

Her right arm is replaced with a pale and pinkish arm that appears to be that of a notail, with four fingers and a thumb, each with a short sharp claw, which Selvenia often paints magenta. Her left is replaced with a well muscled arm covered in a white carapace, either taken from an aglaeca or vayarasa, thought the fingers are notably replaced with serrated black talons from some other creature. The part of her torso where her left shoulder connects is also covered in pieces of similar carapace.

Each of her legs is replaced with a composite composed of multiple swift creatures, though it chiefly resembles a combination of some sort of bird and lizard. They are digitigrade, and have short talons, covered with fine scales in some areas and downy feathers in others.

Jutting out just above her rump, usually hidden under her coat, she has a trio of "tails." One of these tails is that of an angel's, head and all. Which is, according to unconfirmed reports, where Selvenia stores the "emotive" part of her brain. The second tail is not so much a tail as an entire venomous snake, roughly five feet long, covered in black skin with white and gold markings. Her third tail is long and rat-like, and ends in a small stinger.

Note, that while the above mentioned are how she is often found, she often alters parts of herself in accordance to her whims or her judgments about making "improvements."

Dr. Selvenia comes across by people who encounter her as cold, aloof, terrifying "Like she doesn't have a soul or something." This is because she largely is. Her personality is very dispassionate and withdrawn, and she appears to have a genuine difficulty with remember that other people, are, well, people.

She has a cold, detached air in most circumstances, often failing to acknowledge others as anything other than potential subjects, or even more concerning, as potential materials for her experimentation. Selvania has been observed, in the rare social setting, as analyzing others in a way not fully dissimilar to a butcher towards livestock. This attitude is only observed breaking during certain scenarios, most commonly during the act of surgery, for which she displays a rather disturbing degree of enthusiasm.

Aforementioned experiments lean towards the rather dubious. She displays a fascination with combining different creatures together in interesting ways. Nominally to determine ways to improve biologically life through combing the traits of each into a singular "Ultimate being." with her ultimate goal being to become such a being.

Her behavior is attributed by some as owing to a lack of social skills. Indeed in those rare circumstances where Selvenia is caught in a sociable context, she displays a distinct lack of her usual flair and general sense of control. She usually endeavors to escape such scenarios as expeditiously as possible, and has been known to react somewhat poorly to being socially "cornered" in this way.

Note that most of Selvenia's history comes from her, rather self-aggrandizing, blog and thus should be taken with a grain of salt.

Even from a young age, Selvenia displayed a somewhat twisted fascination with putting different creatures together in "novel" combinations. In one account, she took the wings of some sort of small bird, and the tail of a poisonous scorpion, and stuck them onto a small frog-like creature. At which point, satisfied, she froze it in ice and put it in storage.

Accounts of this sort of behavior abound in her tales of her childhood. Sometimes she would let loose these creations upon people she disliked, or more concerning, on people she did. And while nobody ever proved that Selvenia was responsible for these events, or indeed, the gradual disappearance of pets and wild animals in her hometown, she nevertheless developed a reputation for being "That weirdo quiet girl".

At least until one particularly condemning incident.

One day, the pet of a girl Selvenia fancied at the time, had gone missing. Naturally, she felt that this was the perfect opportunity, to make her feelings known, and so she went to work preparing a special gift, in her way. Selvenia went around gathering the most interesting and exceptional animals she could find, and went to work creating a superior sort of creature.

Her crush, did not appreciate it as much as she expected. In fact, her crush, who was a quite clever girl in her own right, quite quickly deduced from this, that Selvenia was the one who had been mutilating all the local animals. Selvenia reacted quite decisively at that moment, and promptly locked the girl in her basement. "As is to be expected."

It was at this point that she began noticing all kinds of "flaws", with her crush. Things that she had "Overlooked" before, having only really observed her from afar and behind bushes up until this point. She decided, then, that she could "improve" her. "Surely that would make her overlook the kidnapping and the poorly chosen gift." Selvenia thought. Selvenia was of course, entirely incorrect in this assessment, but nonetheless re-discovered the joy of taking things apart and putting them back together in novel ways, that had begun to wain with regards to small animals.

It took the community about a week to realize that the girl was missing, and another on top of that to deduce where she was. By that point however it was already too do anything for the girl, and worse yet, to punish Selvenia, who had already decided to leave at that point, realizing that she couldn't hide forever. In her own words:

"It was a sloppy circumstance in many respects, not the least of which my poor note-keeping skills at the time, but it was, a very important, formative event."

• Dr. Selvenia maintains a blog where she talks about her "research", her opinions on the latest pop-culture trends, and provides unsolicited dating advice. Her blog website has been taken down multiple times due to content restriction, but it always manages to pop-up again none the worse for wear.

• Selvenia's salivary glands have reportedly been replaced by ones that secrets some sort of poisonous variety of saliva. This is difficult to confirm, however, as Selvenia isn't sociable enough to get into that intimate of contact with anyone.

• She wears a pair of lensless glasses despite her eyes working perfectly fine. According to one alleged associate, she does this to: "Because she finds them cute." Selvenia herself could not be reached for comment on this subject.

• Dr. Selvenia is not actually a real doctor. She lacks a valid medical license and her doctorate in biochemistry comes from an internet university.