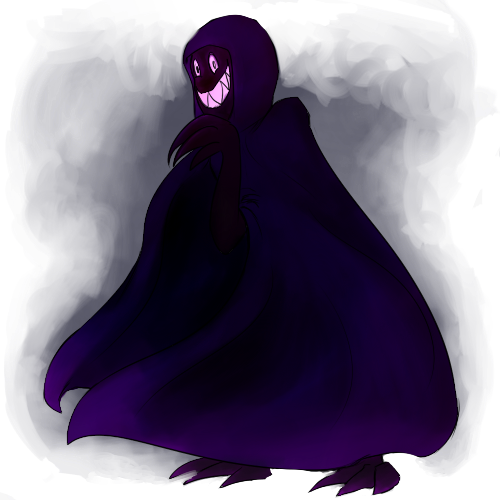 “And as the young aftik jumped out of her bed, out of the closet came the SKELETAL SPIRIT!” — An apidee telling a campfire story

Attack Method: Since castrignises don't exactly exist corporeally, they don't usually need to fight back. They manipulate any storytellers they affect into keeping them from harm.

Castrignises are most often described as cloaked humanoid figures covered in shadow. Their most prominent and recurring feature between storytellers is their large toothy grin and excited expression. Their faces are pitch-black with bright eyes. They have long and slender arms with 3-fingered claws. They rarely use these limbs. Apart from this, details vary. Most castrignises are dark-colored, but some can be lighter shades of red or blue.

In order to feed a castrignis must find a host that is about to tell a story. They then form themselves by affecting their host's mind and forcing the host to include them in any story that is being told. These stories are usually scary, so the castrignis can feed on the fear of those the story was told to. They try to avoid making their stories too scary, however, as heart attacks would mean their food source would be gone. Castrignises are attracted to fire, as they have a natural impulse to go near it in case of campfire stories. This can be their downfall, as bright lights can majorly harm them.

• Castrignises can be killed by shining a blinding light at their invisible gaseous physical forms. This is a bit tough, due to them being colorless. Heat will also kill them.