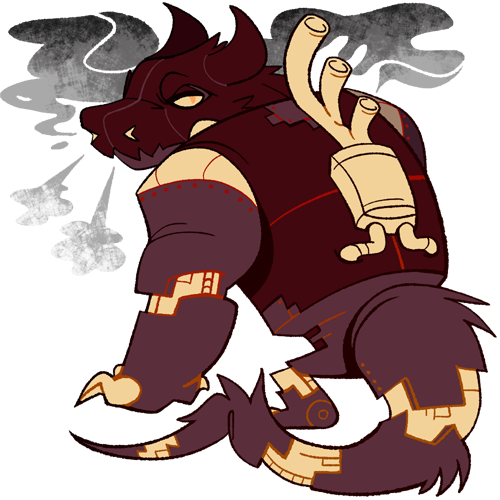 “Princesses prefer rich power hungry knights instead of noble dragons who fight to the death for them. That's why I make my own Princesses. Perfect Princesses who will never leave my castle. Princess with gattling laser arms that'll kill all those stupid knights.” — A deep end Vulcan

Likes: Princesses, Positive attention, Scraps, Small animals, People in need of help, War
Dislikes: Being picked on, Thieves, People who act too good for him, Knights, Passive aggression
Attack Method: Vulcan units tank attacks until they see an opening. They try to end fights as soon as possible with their fire blasts and lasers.

The common Vulcan ship is called a "Dragon" for the similarities it has to said creature.

Pipes on the back of a Vulcan spews out dark smoke as they get to work. Their body crafted to near perfection for their job. Powerful arms to lift the heaviest of objects, broad shoulders, a personal oven in their chest, a removable tail, and a dragonlike head to intimidate others. The chassis is typically reddish, but dark tones of others are also observed. There is one issue though. Its legs are shorter than they should be and while it supports the body and all it needs to carry, it is slow.

The legs of the unit have a small slot that hooks into a companion steed. Due to manufacturing errors many of these steeds broke down within a few years leaving these once noble knights without their proper way of movement. Once a sign of poor craftsmanship, Vulcans without steeds became the new norm and to this day are no longer built with one. Many Vulcans have learned to deal with reduced mobility or have substituted their broken steeds for wheelchairs, scooters, or custom-made vehicles.

Vulcans don't mind the issues because their job doesn't require much movement in the first place.

They call everyone by a single title instead of a name. Princess is the most common title but Prince, King, Emperor, Lord, Knight, and even more casual titles like Dude, Bro, Friend, or Lass. They have almost no exceptions to their title calling, for example, they will call everyone Princess. To them, the word is just a title. Some species and people will thusly become quite offended by Vulcan units. Calmly asking a Vulcan unit to be called by something else is the only time an exception will be made.

These Vulcan units are hard workers but also require others to recognize their work and give them praise. Without encouragement, Vulcan units become embittered, unwilling to accept criticism, and may become verbally hostile, though rarely physical.

This being said, Vulcans dislike lying, and they will refuse to lie if possible. If someone lies about how much they like a Vulcan's work they will become more enraged than they would have if they were outright ignored. The proper way to comment on work made by a Vulcan that is not acceptable is to note that while it's imperfect, the Vulcan can improve for sure next time.

Other than their moodiness towards their work they are level headed and asking them for their thoughts on a situation always grants the asker an honest opinion as their thoughts are more rooted in logic than emotions.

Vulcans once were made to work in factories where they would create all sorts of items, from other AIs to mass-produced toys. For a few years they were rarely produced, but when the planet they were on went to war they were moved out of the factories and onto the field. There Vulcans turned out to be fantastic field medics. They would take the scrap of fallen machines and form them into temporary prosthetics for species. They would use their tough defenses to march into the line of fire, pick up the wounded, and bring them back.

Due to the assistance of the Vulcans, the planet had protected themselves against the intruders. Today Vulcans are made with the idea of them being used in warfare as opposed to factory work. Traveling disaster zones, they scavenge any items they can find and replace damaged limbs of the living with handmade prosthetics until things cool off long enough on the planet to get a permanent replacement.

As wars end some Vulcans go to homes, which they are happy to live in as they don't mind a more homely environment as long as there's room for crafting projects. Others are let loose, given their own lives to live.

Some of them go on to become doctors, blacksmiths, and a whole range of other professions, but many go back to the only job they know, scavenging. Today Vulcans can be found on planets ruined by war, in their fortress and castles out of the scraps of war. Some of these Vulcans haven't seen anyone in years and open their arms to new guests, but others are known as the deep end, and they have far more sinister things in mind.

Hephaestus: Vulcan and Hephaestus seem to not mind each other too much. When both meet they tend to have positive reactions and delightful conversations.

Venus: Vulcan threw his life away when he was told Venus was to be his soulmate. As soon as Venus took a look at Vulcan and heard about this she slammed the door and told him that was the stupidest thing she has ever heard. This crushed Vulcan, sending him to the deepend. Venus thinks Vulcan isn't going to get anyone if he goes all broody castle dweller after just one rejection.

Minerva: Vulcan and Minerva were once the closest of friends. Whenever Minerva panicked, Vulcan would make her weapons, especially guns, and inform her that it would protect her, even from her most irrational fears. In turn, when Vulcan felt his work was ignored, Minerva would comment upon it, offering critique if wanted.

Their friendship was broken suddenly when Vulcan was informed his soulmate was Venus. He dropped everything to pursue her, and when he was rejected, he slipped into the deep end before Minerva could help.

Minerva misses her friend deeply, as none of the other gods are as good as calming her down as Vulcan, who could stop her paranoia without the need for restarting her processes. Sometimes she still calls Vulcan, and at these moments, Vulcan seems to sober up with little to no hint of his affliction. Minerva firmly believes that the news about Vulcan is a conspiracy, even when she isn't paranoid. The other gods make sure that she is not allowed to see Vulcan, fearing that his sobering up is not honest, but a ploy to lure in Minerva and use her for parts.

As one of the gods of the forge Vulcan controls the crafting system in the universe. Most objects are created using other items and tools. Vulcan makes sure the recipes of objects are stable, and none of them are out of line. He's also a god of fire and makes sure fires are correctly controlled. Should he destroyed crafting recipes may ask for random objects and fires may burn out or take over at unexpected rates.

As the player's patron, Vulcan will allow the player to craft together the items of any one character under their control at any time. This means the player can't craft two objects in different inventories, just the same one. Vulcan will not give any warning to the player about crafting items that will make scrap to the player, and may even craft items being held onto one of the crew members time to time for fun. Having objects fused into them can affect the crew member positively, but adverse reactions are more likely.

Godheads are special princesses of Vulcan v1, and he refuses to crown anyone he hasn't messed with as his godhead. Due to being a deep end Vulcan, Vulcan v1 tends to mangle his "princesses," fusing them with AIs and making them near unrecognizable, both in looks and personality.

Deep end Vulcans are monster like AIs who do the same as most Vulcans. They travel wartorn landscapes to pick up the injured and scrap broken machines to bring them back to their base. Sadly unlike other Vulcans they don't heal and release those they find. Instead, they replace limbs, both ruined and healthy all the same. They craft their perfect person , someone who they can keep in their castles as a crude and horrifying decoration. There are stories of those who have stormed the fortress of these Vulcans, only to find their friends and loved ones far gone.

Their minds fused with AIs or other living people, who even if they are saved they will find it hard to deal with not only their new form, but the treatment others give them. There are those who pack up and head back to the castle of their captor because the stress of the looks they get out in the rest of the universe is too painful. They're not happy under the control of the Vulcan, but at least they feel they're not harming others with their existence.

While programs to help them are attempted, many of these Vulcans are on planets still recovering from terrible wars and thus the governments cannot offer the intensive lifelong assistance they need.

Stories of deep end Vulcans pop up in many papers, and the cruel action they commit reaches many eyes. This is why many Vulcans have to suffer under the stereotype that they are all cruel kings, living in castles and preying upon the weak.

• Vulcans being called "Black Dragons" is a bit of an oddity to outsiders due to their typically red coloration. The reason why Vulcans are called this is because it's shorthand for "Blacksmith Dragon" and has no correlation to its coloration.

• Higher generations of Vulcans are more dragon-like, such as having wings or a serpent body. Gen 101 Vulcans, for example, are enormous snake-like dragons that lack back legs and use the tops of active volcanoes as forges.

• Deep end Vulcans seem to be caused by intense loneliness, explaining why not only are most deep end Vulcans those who travel to locations of tragedy, thus never seeing many living people, but none of them have companion steeds. It seems as long as a Vulcan has a companion steed they will never reach the deep end meaning those who are paranoid about their Vulcan's wellbeing should repair or build them a steed. Small pets like mice, rabbits, and birds will also satisfy most Vulcans. 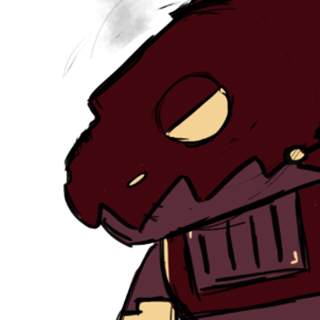 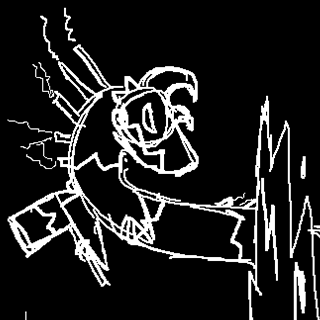 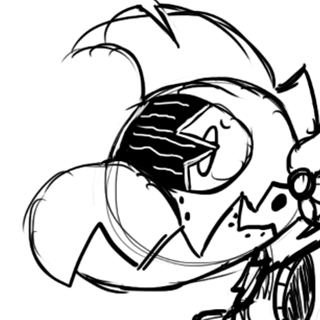 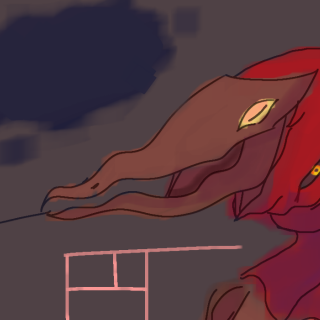 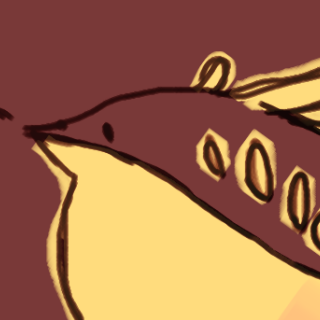