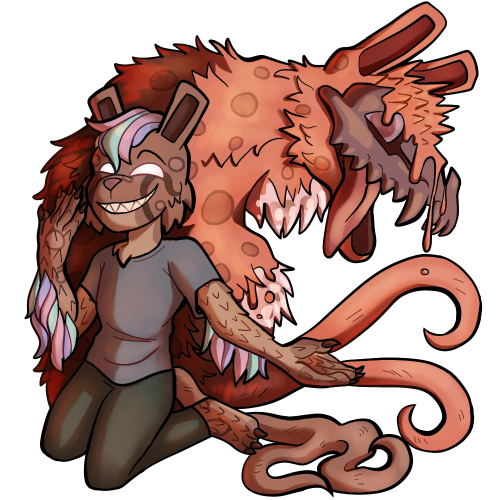 Attack Method: Swipes at the foe using its stingers or tries to bite them in a speedy frenzy.
Summary: The sha is an incredibly loyal clockwork that forms symbiotic relationships with other clockwork strains to boost the power of its symbiont and its own infectivity.

The sha strain has a particularly long period of onset in which the infected will notice nothing unusual about themselves aside from rather leathery skin for weeks on end. Around one to two months after the initial infection, the sha will feel particular pain in their ears and tail if they have them, and increased roughness across the body, particularly in their hands, forearms, legs, and forelegs, including the palms and soles. Any teeth the sha may also have will grow slightly longer and sharper.

The mind truly starts to decay as the infected's ears and tail become so shriveled up that they fall off completely. Regardless if the sha originally had ears or a tail or not, it will begin to grow a new set of long, leathery, rectangular ears, and an equally leathery tail that splits off at the end to form a Y-shape. The infected's mind generally seems to go at the same rate the ears and tail are grown.

As it grows those, the sha's skin in its particularly leathery areas, excluding its new ears and tail, will begin to grow sharp, barbed, spike-like stingers. They are generally fairly long and have been recorded to average out at two inches in length on notail-sized beings. These stingers, coupled with the sticky and viscous slime the clockwork now starts to excrete, are effective for combat or digging into the skin of other clockworks, as it frequently tries to do. The slime also contains chemicals that lower aggression towards it in anyone stung, particularly clockworks. Shas can willingly detach their stingers and said stingers will continue to pump in slime afterwards.

Once a sha starts to develop into a was-sha, its bodily composition will start to melt and cover the surface of its clockwork symbiont, eventually hardening to provide weak fleshy armor for it. The added influence of the was-sha generally makes the symbiont stronger and better at taking hits, as well. The only structural features of the sha that remain are its rectangular ears and tail with split ends, and though they are normally positioned in the appropriate location for its symbiont, it is still not uncommon to find those features positioned where they should not be on the clockwork, such as the was-sha's tail sticking out of the symbiont's shoulder. The previous ears of tail of the symbiont will fall off to accommodate it.

The stingers that aren't embedded in the symbiont's flesh will push themselves up to the head of its symbiont and arrange themselves in a crown-like formation. Any features of the sha, like feathers or fur, will cover the symbiont like a pelt blanket fused to the skin. Was-shas are able to leech nutrients and energy out of its symbiont's bloodstream using its stingers, keeping it fed, though it only needs a very small amount of food due to being an inactive clockwork. The was-sha's symbiont has generally had its slime-producing mechanisms overtaken by this point to produce slime with every quality of the original symbiont, but the infectivity of was-shas. For example, a crocotta with a was-sha will still be able to reflect light and absorb sound, but anyone infected by its slime will become a sha, instead. Was-shas produce the amount of both its own and its symbiont's slime combined, due to the was-sha covering almost all of the other clockwork's body. Though the slime of regular shas is useless at infecting anything but other clockworks, the slime of a was-sha is completely able to infect other beings.

During the fairly long period of time between initial infection and the growth of stingers, ears, and a forked tail, there are virtually no behavioral changes in those infected. As the major physical changes begin to set in, the sha will start to experience intense aversion to nearly every being except other clockworks. Their reactions to other people range from fear to intense anger, but rarely will the sha physically lash out at other people. Where they can find another clockwork, they will find an intense feeling of companionship with it and will attempt to follow it. Shas who achieve this are generally so set into their infection that they mindlessly and gladly abandon their previous life to trail the clockwork.

In the event of meeting another sha or a clockwork after starting to follow another, the sha will react with territorial aggression towards it to get it to leave itself and its soon-to-be symbiont alone. When presented with an option, shas will generally choose to follow the weakest-looking clockworks. Those close to death are seen as a prime pick by shas. Some believe that, given the largely symbiotic relationship between a sha and the clockwork it chooses to follow, it is out of a kind of parental instinct to support the weakest of its fellow infectious monsters.

Once a sha has chosen a clockwork to follow, the likely response from the clockwork is that it attempts to attack the sha. The sha, provoked or not, will inject its fully-formed stingers into the clockwork, the chemicals in its slime calming the symbiont and forcing it to regard the sha as an ally. The sha will continue latching onto the symbiont until it has calmed, and if thrown off, it will simply sting the clockwork again until success. Even if the sha is thrown off and cannot reach the other clockwork again, the stingers that are pulled off and remain in the other clockwork will continue to pump in sha slime.

Unlike nearly every clockwork, when in possession of things it can consume, the sha will not automatically eat everything as soon as it can. Instead, it will drag back some of its catch to its symbiont for it to eat. As it feeds and is under better distractions, the sha will sting the clockwork once more to promote more friendliness to itself. Not only that, but stingers left in the catch fed to the symbiont will make it more attuned to the sha, as well. This process will repeat itself for a very long time until the symbiont demonstrates total friendliness towards the sha at all times, a process which can last for a while depending on how much slime the sha needs to inject into the clockwork relative to the size of its bloodstream. This threshold increases over time due to the food provided to it by the sha, thus making it a larger and stronger clockwork.

Upon meeting this chemical threshold, the sha will gradually stop hunting for both itself and the clockwork. Its aggression wanes to being an incredibly lax clockwork that will sting its symbiont and refuse to detach itself. The symbiont, being so controlled by the sha's slime, will not try to remove the sha from its body except for in the rarest of situations. The sha's body will start to melt around the clockwork, turning into a was-sha that has fully integrated with its symbiont. Was-shas are completely immobile and neither can nor want to interfere with the general hunting patterns of its symbiont, content with receiving nourishment from it without doing any hunting itself.

The state of a being a was-sha is where the sha finally benefits from its symbiotic relationship, saving energy to forcefully convert the other clockwork to produce sha slime instead of its own slime due to no longer having to hunt for itself. Even when starving due to the starvation of its symbiont, was-shas exist solely for infecting others and creating more shas that will make the weak clockworks stronger.

Crowned: In the extremely rare occurrence that a sha forms a symbiotic relationship with another sha, the combination of their was-sha forms simply creates a single, larger sha that almost always possesses an extremely large stinger crown on its head. Crowned shas, due to the doubled-up melting and hardening of their bodies over each other, are significantly more fire-resistant than the average sha and still retain the extreme aggression and territorial behaviors of a sha before becoming a was-sha. However, its slime is ineffectual at infecting others due to not using the slime of another type of clockwork as a base.

Dynastic: If a sha creates a symbiotic relationship with a clockwork that already has a was-sha, the resulting clockwork with two was-shas creates a creature with the large stinger crown and fire resistance of a crowned sha, but it is able to infect others into more shas due to having a non-sha clockwork in the relationship. However, having two shas leech off the body of its symbiont typically leaves it with a short lifespan due to being unable to feed both itself and two inactive clockworks.

• If a non-clockwork creature is particularly deadly and has the smell of rotten flesh and/or rusted metal on it, shas will occasionally form a symbiotic relationship with it instead of a another clockwork. However, it is impossible for it to become a was-sha due to the lessened bonding effects its slime has on non-clockworks. It just makes a very loyal, if not territorial companion. Luckily, the sha will generally not try to sting such a symbiont as long as they act non-hostile towards the clockwork.

• As the slime of a sha is generally noninfectious unless using the slime of another clockwork as a base, its extreme stickiness is sometimes used a powerful adhesive in commercial products. However, such products generally come with a liability form and a stern warning to limit contact with the slime as much as possible.

-Back to Clockwork Menu-
< Nemean
Tenebrae >