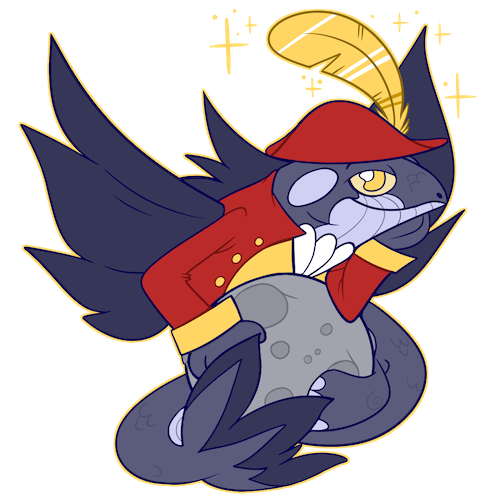 “Look look! No other view like the view from the moon, si?” — Piccolo Fritz, welcoming houseguests

Job: Politician
Likes: Waltzes, Wealth, Spite, Loopholes, Freedom, His new family
Dislikes: Restrictions, Sticklers, Tension
Notable contributions: Piccolo is running a campaign that would shift the political powers of the planet Orcheston. He has also introduced another moon into its orbit that caused a very literal, gravitational, shift.

[Slots Magnet] Neutral trait
This character is a natural born gambler. They will gladly gamble away some of their credits on any game of luck.
[Ambitious] Neutral trait
This character has strong ambition for a goal or several goals. They won't be easily dissuaded from a course of action. The ambition this character holds may be for the better or the worse.
[Goliath] Positive trait
This character is bigger, stronger, and more durable than their peers by a fairly significant amount, often towering over their smaller kin. Tends to have various size related issues, such as having to duck when going through doorways and having a hard time finding equipment in their size.
[Moneymaker] Positive trait
Characters with this trait tend to be wealthy and successful. They are good with money and will often find ways to make themselves and their allies richer.
[Spiteful] Negative trait
This character is extremely angry and will do many things out of spite. Some with this trait will try to hide their malice, but it is still there and effective.
[Bottled Rage] Negative trait
This character will store away their anger or other such emotions whenever they feel them and won't tell others about the anger they're feeling. Because of this, after too much anger has been stored up, they will be prone to burst at even the smallest thing and fly into a fit of rage.
[Disloyal] Negative trait
When given the chance, this character may rebel against anyone who is higher up. They are more likely to lose morale when they do not get what they want or when they feel a higher up is going against them, even if the situation was justified.
[Overconfident] Negative trait
This character is too confident in their abilities and is not realistic about how dangerous or challenging something may be. They may take on tasks they cannot do, or put themselves or their team in dangerous situations because they think they can handle it.

Piccolo Fritz is blue. He is also massive, even by his subspecies standards. In fact, Piccolo has more in common with a whale than an actual fish, all the way down to an orca pattern that runs along his body and a humpback belly. Why he has developed this way is a mystery, since all of Piccolo's relatives are a mix of common piscipleus or brutes that show no sign of mutation. However, if one thing's clear, it's that Piccolo enjoys the extra height. Every other trait of his is usual for a brute piscipleu: frilled fins and a firm, bulky stature. His voice is described as bellowing and operatic.

Most often, Piccolo dresses himself in a yellow waistcoat, red frock coat, and a tricorn hat with a froofy golden feather. No matter how his clothes change, his feather is always a constant. Occasionally, Piccolo may add on a bubble pipe for no other reason than he finds the gimmick endearing.

Piccolo, the self-declared soon-to-be principal, requested that Cosmosdex staff visit and interview him, then write his entry as a right of passage. He then asked for an endorsement of his political campaign, but was turned down to preserve the staff's credibility.

From his time in the academy, Piccolo concluded that traditional politics were too restrictive. And boring. While he does not personally subscribe to the label of anarchist, many of his behaviors pertain to it, such as how often he throws parties, for his party, at his private estate. These parties are nicknamed "rallies" or "meetings" and the style of them is usually a mishmash between a waltz and a rave. The wildness of each party varies, but something is bound to get broken. Property damage is of little concern to Piccolo, since he has plenty of funds to fix it. It's a small price to pay for the freedom he wants to promote.

Amidst the noise, Piccolo seems to be in a far off state of bliss. Since he lacks the stress of most candidates, he can socialize rather well. Staff ran a poll and found that supporters of candidate Fritz are overwhelmingly positive, calling him "generous" and "welcoming". He treats them like family and offers refuge to almost anyone who enters his estate. Members of Piccolo's party are houseguests in every sense.

Piccolo is also extremely tolerant, such as when there's a tussle in the courtyard, but some say he is tolerant to a fault. He rarely reprimands his houseguests. If a hasty solution won't cut it, Piccolo has a habit of assigning others to deal with the problem while he bottles his frustration or flat out ignores it. "This is fine," he'll say. These events will eventually build and manifest itself in destructive mannerisms, like making petty remarks towards the people who doubt him or doing things out of pure spite. The biggest example of this has got to be the moon he lives on, purchased specifically because it danced around a loophole in Orcheston's import law. Piccolo's blood family explains this by saying that, "he never grew up". Those who are against Piccolo's campaign will point to this management style without fail, saying that he's too lenient on good days and downright disrespectful or inconsistent on bad ones.

By the end of the interview, staff asked Piccolo why he wanted to be the principal of a school so badly. To this he responded, "not for power, just everything else." Piccolo was then asked if he had any advice for aspiring leaders. He replied, "start small," whilst gesturing to his city-wide home.

Piccolo likes to begin his history by remembering when he was class president. However, "class president" is a misnomer. It's not uncommon for non-Orcheston citizens to get confused, since schools, classes, and school boards are synonymous terms for piscipleu cities and government. But in this case, Piccolo really was just the student president of his class, which does not qualify him as a veteran politician. Subjectively, it might mark him as an above average citizen.

An interview with Piccolo's academy shows that he was remembered fondly, but not permanently. At some point, he was expelled for unruly behavior and unrealistic ambitions to run for school principal (as an actual governor this time) in his early teens.

Piccolo finished his studies off world but had difficulties finding a job thereafter. Only regal piscipleus were permitted the high positions he sought for. His age was also a factor, however Piccolo assigns less blame to this.

Either in search of sponsors, a new career, or a vacation, he retired to a resort and lived on his own in a downtrodden neighborhood. He still desired to make an impact and figured he needed the credits to do it. Of this, he had none, so he turned to the smartest, probably easiest and most desperate thing he could think of: gambling. As expected, the first hundred attempts left Piccolo with less than he started with, and when his blood family found out where his money was going, Piccolo's funds were cut. With so little to lose, he saw no reason to stop.

And somehow his efforts paid off.

Now armed with trillions, Piccolo was able to hire a campaign team to spread his name. While they filed papers, Piccolo went hunting for a new base. He soon came across a lucrative real estate business that sold private "space islands". These "space islands" were orphaned moons and asteroids. Piccolo was rapt with the prospect of owning his own world and proposed it to his campaign team, calling it a formal fuck you to the limitations of his homeworld. The campaign team rummaged through Orcheston law and found that there was never a section devoted to the importing of moons, therefore, moving in would be completely legal. Piccolo and his team then hired a fleet of tow ships to transport the moon. Several architects from Orcheston were also commissioned to build him a manor, using their expertise on school domes to include its own glass atmosphere.

Nowadays, Piccolo's manor is the size of a school (an Orcheston city) with thousands of dorm rooms for visitors and residents. By keeping his moon a private estate, Piccolo effectively runs his own colony on a technicality, in which every citizen is a houseguest. Politicians are still baffled by how such a loophole was made.

As he never renounced his citizenship, Piccolo Fritz sustains his ambition to be the first principal in eons without direct descent from a regal family, although he is campaigning without an election season or official procedure. While this notion is supported by many of Orcheston's citizens, whether or not the one to break the mold should be Piccolo is controversial at best.

Moon home: Piccolo's home functions as a city with its own set of rules and inhabitants that differ from the planet it orbits.

• It's rumoured that the feather of Piccolo's hat is a harpy feather.

• Piccolo commissioned several amusement structures alongside the construction of his city. For instance, one of his moon's craters has been converted into a pool. Piccolo's rooms are also built on a rotisserie system that shuffles for different occasions. However, most of Piccolo's rooms are used for storage, only actively living in about ⅓ of it.

• Piccolo was an outlier in Orcheston's income report and should not have been counted.

-Back to Legendary Menu-
< Peskotti
Puma >