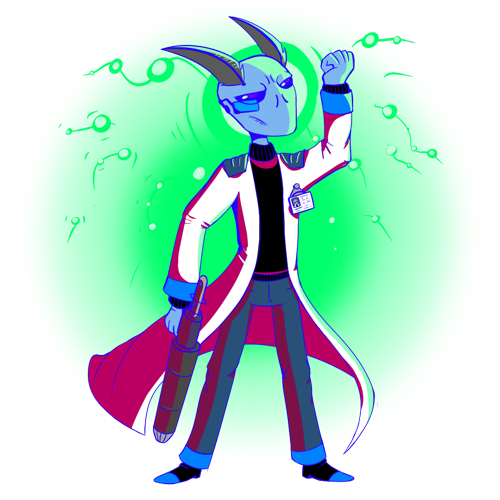 “Why stop at 20/20 vision, why not 50/50 why not shoot lasers or cats, cats with lasers shooting out of your eyes!” — A Vaeri Optometrist

Attack Method: From a distance with High-Power precision weaponry. Usually don't fight to kill, but to disable For SCIENCE!

Vaeri are atheistic, but some actually develop a religious obsession with 'Holy Science'

The vaeri are tall and thin humanoids with bald heads and no mouths. They have a nubby vestigial tail and they lack proper ears or noses, having a small oval hole and a pair of narrow slits respectively.

They come in various shades of blue, with males being more blue and females tending towards indigo and even violet. They have large black eyes, with black pupils, and irises in the same range as their skin, above which are a pair of long slender horns extending from the brow line, generally resembling 'feathery' antenna, but otherwise varying greatly.

The vaeri are a bunch of melodramatic, boisterous, loud, and megalomaniacal B-Movie mad scientists. Calling them simply 'Mad' is a lot like calling a car a metal box, it's accurate but it doesn't get the point across properly. Beneath, or perhaps besides, this demented exterior, lies a near unparalleled intellect eager to advance whatever scientific cause it happens to be championing at the moment. Or perhaps more accurately, to determine what abomination unto the laws of nature they can get away with next before something kills them.

Their scientific dedication and intelligence are dutifully accompanied by a powerful ego, basically, very few, if any, vaeri ever champion any sort of 'quiet' scientific cause, and they refuse to do things in a practical or sensible manner, after all, what is the point of science if you're not willing to go 500%? Even their attempts at subtlety and stealth, tend to be more than a little excessive. Of course, even so, they are far from unreasonable, while most are averse to limitations, and scornful of restraint, when pressed (Generally with judicious application of force, physical or judicial) they will usually comply, at least until they are sufficiently moved by some manic whim to defy or subvert the notion of law.

Long ago, before the Vaeri developed space travel, the Vaeri lived in balance and harmony with the land of Oerson, seemingly content to live in accordance to natural means and to never exceed that which nature had wrought. They quickly grew bored of this state of affairs, the natural world was so boring, so expected, so bit by bit they started experimenting with things, first just things to make their lives easier, but then they started messing with things just to see what would happen. Things quickly got out of hand, and in a few short decades the land of Oerson was engulfed in chaotic anarchy of thousands of competing mad scientists, all eager to prove their superiority to both nature and their fellow kin. The land suffered, the people suffered, and the world was on on the brink of destruction. On this, the eve of their doom, came Ugeniux, who united a cabal of the most relatively stable of the science-lords, and formed an army to defeat the worst, most demented of the aggregators.

Thus did Ugeniux become 'The Great Unifier' and the vaeri were free from the tyranny of demented psychopaths. The vaeri being who they are, this state of peace did not last. The vaeri thus spent the next few centuries in a state of vaguely directed anarchy, reaching some sort of strange equilibrium where they were not just constantly destroying their society every few months. And so, with great hardship, the vaeri were able to ascend to stars, to experiment and interlope with the natural order in a whole wide galaxy where such lines had yet to be crossed.

Some few decades later, a ship full of Vaeri pulled into a space station. History knows not what precisely happened on that fateful day, in the middle of nowhere, but it did nearly spark a some major tragedy, but thankfully, due to some quick diplomatic maneuvering, such a terrible tragedy was narrowly averted.

Arc-Vaeri: An extremely rare subspecies of the regular vaeri. Physically, arc-vaeri have yellow markings on their skin and eyes in various shades of yellow, They're also taller and lankier than normal vaeri. Their horns form "lightning bolt" designs. They also have a prehensile tail that ends in a large serrated stinger, which they use to drain electricity from things. They can also discharge energy from their body, and their always discharging a little, which arcs around their body. They're twitchier and more paranoid than normal vaeri, the latter partly due to being hunted as a source of power.

Low level psychics: They use their psychic powers to communicate.

• Vaeri occasionally get it in their head to try and conquer the galaxy with horrible mutants and/or doomsday machines. They almost always fail, and also die, leaving behind plethora of dangerous devices to hazard the galaxy.

• Due to their photosynthesis, vaeri are considered by many to be a form of ambulatory plant. They are not, and such comparisons deeply annoy them.

• Many vaeri have difficulty distinguishing between romantic and scientific attraction, and often end up experimenting on their mates, or mating with their experiments. 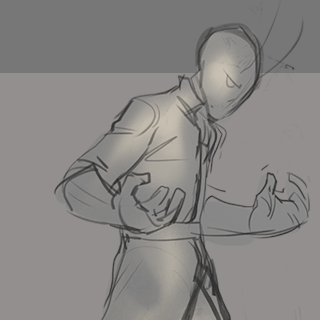 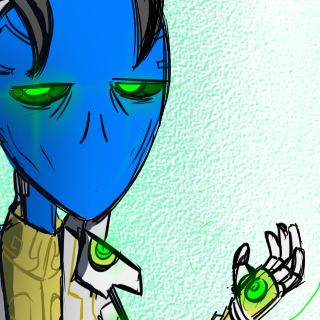