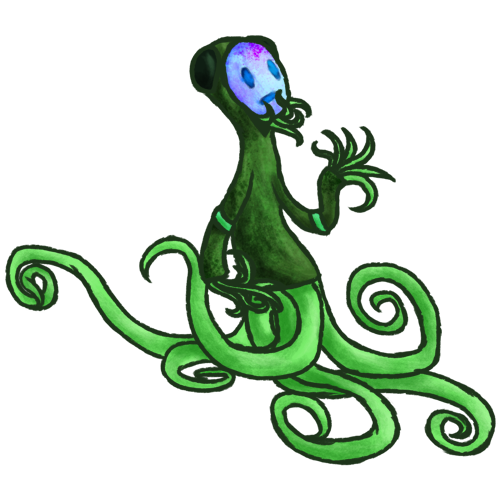 “E G G B A B E” — Sylnarkt F'tersh, singing. Or reciting poetry, it's impossible to tell.

Attack Method: Remove disguise, slither along the ground, and constrict the opponent. 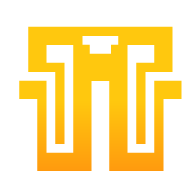 [Strangely Graceful] Neutral trait
This character is graceful, but in a sort of odd way. Many will note that this character has an odd sort of grace, and is frankly sort of mysterious. This causes many other characters to pry more into them.
[Stealthy] Positive trait
This character is skilled at performing tasks without being seen or heard. They are good at avoiding detection and are much less likely to be caught doing things without permission.
[Intrusive] Negative trait
This character has no sense of personal space and might do rude things like going through people's belongings, touching people and asking personal questions. This can be tiring for their fellow crew and could get them into deep trouble.

Chriilth'tyn do not understand the concept of gods, and believe limbo gods to be based on wild tales of living or once-living creatures, no different from cases of chriilth'tyn being worshiped.

Chriilth'tyn strongly resemble hoodies in varying speckled shades of dark green, with tendrils emerging from the openings. The "hood" is actually their head, with large semi-circular eyes on the outside of it that are often mistaken for decorative additions to the hood. The five tendrils at the neck hole are prehensile tongues, which they use to operate masks. These masks usually contain musical strings on the inside, as well as a small text-to-speech keypad. Each "sleeve" and the bottom of the hoodie end in six tendrils, although all of these will normally be covered by clothing to make them appear more humanoid. They may also wear elbowpads and kneepads to remember where to pretend their joints are. When not covering their tendrils, their movement is eerily silent.

The most notable thing about chriilth'tyn is their movement, which has been described as "off" even by other species that ambulate via tendrils. Chriilth'tyn prefer the term "fluid" to describe their motions. They describe the movement of other species as "stiff," "jerky," or "choppy," comparing it to stop-motion animation. Second only to their movement in strangeness is their speech, which contains many thoughtful pauses and awkwardly constructed sentences, regardless of whether they are using their original musically-based language or tapping out limlish with a keypad. A chriilth'tyn may make one statement on a subject, and then say two completely different and often conflicting statements on the same subject immediately afterward, claiming that they were trying to "pin down" how they feel. Due to their behavior and appearance some believe chriilth'tyn to be from outside of this universe. While this is complete nonsense, there are nonetheless numerous reported cases of chriilth'tyn being worshipped by some fringe cults. Chriilth'tyn do not understand or even like this kind of attention, but being an occult idol usually involves free food, so most won't turn this down. Chriilth'tyn live in large communities in forests, and do not build shelter structures aside from thin, translucent covers to put between trees. These covers are primarily for chriilth'tyn who are extra-sensitive to water and objects that are easily damaged by water. Tools, entertainment devices, and other belongings are stored within holes in the ground around the forest floor. However, none of these holes belong to any one chriilth'tyn in the community, and things are always seen as being "borrowed" from a hole. The only truly personal things chriilth'tyn have are decorated bags containing their collections of useless items that they enjoy looking at or playing around with. They will leave one of these items, usually a shiny rock, around the edge of a hole they're borrowing from so that they can remember to return whatever they borrowed. In space or in communities primarily composed of other species, they will often create piles of blankets or pillows as storage spaces to bury their items in. It's not like they need bedding anyway, as they curl up around branches or poles to sleep. If one finds an object missing from a dresser and a shiny rock on top of said dresser, it's likely a chriilth'tyn "borrowed" it.

Observing their planet from space, one would assume that chriilth'tyn never made any technological or cultural advancement. In fact, one would have no reason to assume there was ever a sentient species there at all. This is not due to being extremely primitive, but rather due to going underground to make anything more advanced than what can be made in the middle of a forest. This made the crew of notails sent to explore the planet very surprised when curious green hoodies started slithering out of the forest. Rather than retaliate to the resulting open fire from the notail crew, the chriilth'tyn retreated into the forest and resolved to make sure their second encounter would not be met with violence. They modified their instruments to resemble the notails' masks, fashioned simulacrums of the notails' hands, and put on some pants. While they technically succeeded in their goal, strange masked creatures walking out of the forest caused a rare flip in the notails' fight or flight response. The notails flew off and asked another species to go deal with the things. The kuppas investigated the planet instead, and interspecies relations were established without incident. The chriilth'tyn took the first impression they had made to heart, and have continued trying to appear less strange and fit in with the rest of the universe. So far, they're not very good at it.

Nothing but wilderness to most species. The underground is supposedly more interesting, but the passages aren't made for most species to be able to fit through. Besides, even getting to the passages would require walking through a forest full of chriilth'tyn, which not many people are up to doing.

Dummy: Dummies sport uncanny masks with moving eyes and mouths in varying styles, sacrificing their masks' use as instruments. They are very blunt with their speech, and do not understand sarcasm or non-literal speaking. If they become lost during a conversation, they will attempt to cover it by cracking a joke or changing the subject to one of their interests.

Minstrel: Minstrels carve the holes in their masks to resemble faces, so that they can still use their masks as instruments while keeping the appearance of a mask. The obvious drawback to this is that they cannot change their expressions easily, and so are often hard to read. Most minstrels can understand sarcasm, though it takes great mental effort on their part. Either as a form of payback or a misguided attempt to "fit in," minstrels will often speak in literal riddles themselves, believing this to be a form of non-literal speaking no different from sarcasm. Minstrels will often begin plucking on their strings when distressed, not to speak but simply to try to calm themselves down.

Elder: Elders make no concessions for other species, refusing to even cover their tendrils. They do not consider their instruments masks, and do not use them for appearance's sake. An elder may even toss away an instrument they've used for years if it gets scratched or scuffed in such a way that someone might see a face in it. Elders tend to be more solitary than other chriilth'tyn.

• Chriilth'tyn can relax their muscles and "ragdoll" at will, flopping around on the ground in unnatural-looking contortions. This isn't useful for much other than performance art and weirding other species out. 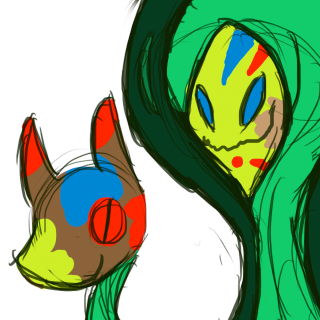 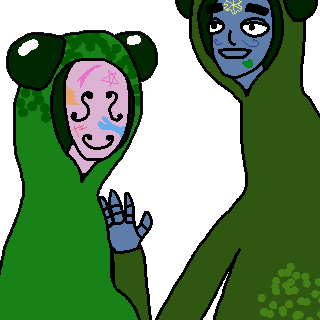