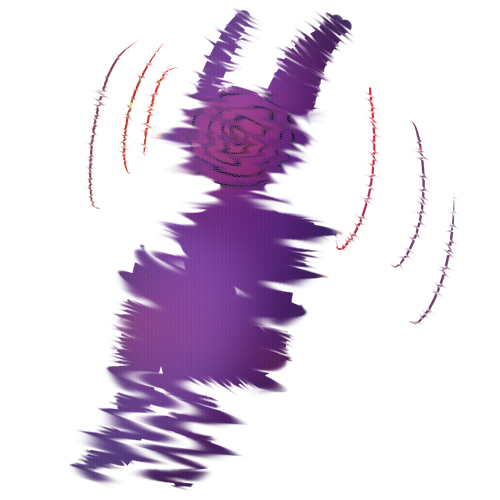 “AAAAAAAAA MY RADIO IS FLOATING WOOP WOOP WOOP!!” — A very startled Aftik that has just learned of a Musials' Soundomancy skills.

Attack Method: Attempts to dodge and disorient foes with soundwaves, allowing stronger allies to go in for the kill.

A Musial will only worship a god if their general group of friends also happens to worship said god. Otherwise, they will simply ignore the existence of most religions.

Musials are made entirely out of sound, which makes describing one quite a task. The sole reason that musials can be "seen" at all is because of the soundwaves that make up their forms causes visual hallucinations within the proximity of the source. Many of them appear as static spots in one's vision (akin to some species migrains), water in the distance, floating colors, or vague outlines of an "entity" typically reported with large ears.

Because of the nature of musials, and the fact that they are sound-based, rather than matter based. They are technically not physical but can still be harmed in numerous ways, particularly, by having their soundwaves intercepted by loud, unpleasant sounds. A musials' "appearance" will often become blurred and distorted when injured, increasing in severity depending on how severe the injury may be. Most other species note this effect as "exceptionally disturbing."

Musials are incapable of consuming regular food, and thus, instead will merge into nearby soundwaves in order to gain sustenance and extend their own existence, since, without doing this process, the soundwaves that they are made of will gradually lower in volume until going silent forever.

Musials are often considered "laid back" and "chill" by most species that they are likely to interact with. Both of these labels are fairly accurate, given that musials are unlikely to hold a grudge against a majority of species simply by the actions of a single individual. Although this may make them simply too open for their own good at times, they'll often forgive others even if said others happen to be a constant and consistent threat to them.

Musials have a very strong passion for music, both when it comes to their feeding habits, and for genuine interest in the art. Every individual musial has it's own particular likes and dislikes when it comes to music, and indeed, sound in general. Some enjoy calm and quiet, others enjoy loud and booming, and everything else in between.

Most of the species is often charismatic and enjoys being around both their own kind and other species, although they struggle to form long-lasting relationships with non-musials due to the obvious barrier that comes with trying to talk to someone who is, in fact, physical, and not made of sound.

While not necessarily the strongest point of the species, musials often do enjoy working with advanced tech, whether or not they have any level of competence with it, however, is entirely dependant on the individual.

The history of musials has been a fairly uninteresting one, save for the fact that, upon being first discovered. It was originally believed that their homeplanet of Ribbiola was completely barren due to the sound-blocking-equipment used by the very first crew to discover them.

Musials hail from the planet Ribbiola, it's surface appears to be made of a hard, black, stone-like substance, with white, mountainous regions in various areas, causing the planet itself to resemble the dominant species on it. On a somewhat anomalous note, contact with the surface of this planet sounds remarkably similar to banging on a xylophone, the reason for why this is so is currently unknown.

Soundomancy: In part because of their nature as being made of sound, musials possess a particularly unique form of telepathy that allows them to move objects so long as they are currently emitting noise, effectively allowing them to "hold" things. Along with this, it also allows them to change their own soundwaves into different frequencies, which can be used to very easily disorient non-musials if the need arises.

The main drawback to this is that it requires ejecting soundwaves, thereby shortening a musials existence, and requiring them to assimilate more sound into themselves shortly after using this ability in order to stay alive. The more intense the use of Soundomancy is, with an example being lifting a particularly large object, the more "eaten" sound will be required to safely perform the task.

• Musials that live for a particularly long time will tend to only prefer music from the era that was around for the first couple of hundred years they were around for. Meaning that they will often dislike, or won't "get" newer forms of music.

• As how musials exist and form memories is still unknown, they are considered anomalies to the public.