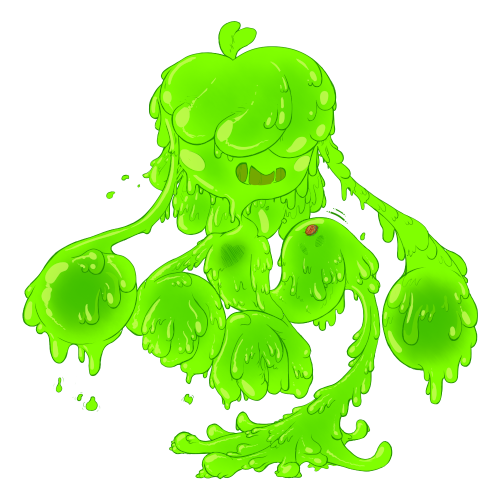 “Don't eat the slimes.” — The Universal Food Safety Board

Attack Method: Will usually collapse into a puddle and wait. If that doesn't work they'll attempt to envelope the aggressor in their mass.

[Affectionate] Neutral trait
This character cares nothing more then to watch out for and take care of other characters. They commonly end up the "parent" of most group and do their best to keep everyone in high spirits. Sadly some characters may not enjoy this at all or this character might mismanage their own personal time due to caring for others.
[Adaptive] Positive trait
This character is more able to survive in an unfavorable environment, given time. This character is able to handle radical changes without folding under pressure.
[Food Aggressive] Negative trait
This character is always the first character to eat once the table is set, and no one else would dare sit down with them. If anyone attempts to take, touch, or even look at their food they may become very aggressive. If a food aggressive character runs out of food they will do anything to get their next meal, even if it means ripping it off a co-worker. This character will also be unwilling to give food to a starving character to the point where they will put their eating habits over their life.

Galoopers aren't particularly religious, but they sometimes venerate Vaska G., whom over the years has become greatly mythologized from her more humble reality.

Galoopers are slimey, acidic creatures who's precise appearance varies, as they have a habit of mimicking people they're nearby to a certain extent, but their are some consistent points to their appearance.

Their body is made up entirely of fluorescent goo that comes in a wide variety of colors, they always have a basic vaguely humanoid structure of a head, torso, and two arms. Their body structure, being entirely goo-based, is rather amorphous and vague. Most galoopers are a single, very strong color, but a few come in a multiple colors, with three being the most that are commonly seen.

While their head has a habit of varying due to their mimicking habits, they consistently display a pair of long tendrils running down the sides of their heads, ending in large globs of gooey material. Within the torso is a heart shaped 'core' that comprises the majority of galooper's being. This core is made of a hardened version of what the rest of their body is made of and If it where to be destroyed then the galooper would die.

The galooper reproduce in one of two ways. The first, and more common, method, is to simply spawn from one of the many spawning pools dotted around Gishgallop. Galoopers will exit these pools from time to time, with a variety of colors and demeanor. The other way, is for one or more galoopers contribute a portion of their mass to create a blob. This blob is then incubated under similar conditions as exist within the searing mass of the spawning pools. Within a few months a new core will form and a new galooper will be born. Galoopers made in the latter way will often be similar to their parent or parents.

Occasionally, two galooper cores will form in close proximity to each-other. Usually, one either fails to develop or they simply drift apart and continue to develop as normal. But occasionally, they don't, and eventually they start growing into each-other, getting stuck together. Galooper that spawn in this way are essentially, two galoopers in one. As galoopers are not very complicated, this generally just means twice as much gratuitous affection as usual.

Galoopers are above all else "friendly." Very friendly, to the the point where it's difficult to get a galooper to not make gratuitous shows of affection towards people, animals, whatever. This is a bit of a problem, since galoopers seem to not fully understand that their bodily fluids can hurt people, and much like a small child, will be very disheartened by rejections of their well intended advances, without really understanding why what they did is bad.

Thankfully, for those who might feel bad themselves, galoopers "bounce back" very quickly, often requiring one to break their hearts several times as they try and try again.

Another thing galoopers are is gluttonous. No one's entirely sure why this is as galoopers don't really need to eat much to survive, and indeed none of the nutrition actually sustains their core. When asked about it, a galooper reported "I just generally feel hungry, all the time." And then proceeded to repeatedly ask for food and/or hugs, not stopping until one was provided to them. For posterity sake, the provided item was an affectionate hug.

Due to their general disposition galoopers often have trouble comprehending hostility or dishonesty, and thus have a bit of a reputation for being naive. This often leads to galoopers being exploited by the unscrupulous for various reasons, most typically the useful properties of their bodily materials.

The history of the galoopers is tied with the environmental decline of a planet known at that time as "Empyria". Empyria was a wonderful and beautiful planet colonized by quelan for precisely those reasons. Over time, the "Cosmetics" Company that sponsored the colony had been dumping "cosmetic" waste into the environment with reckless abandon, which gradually caused the environment to take a turn for the worse. 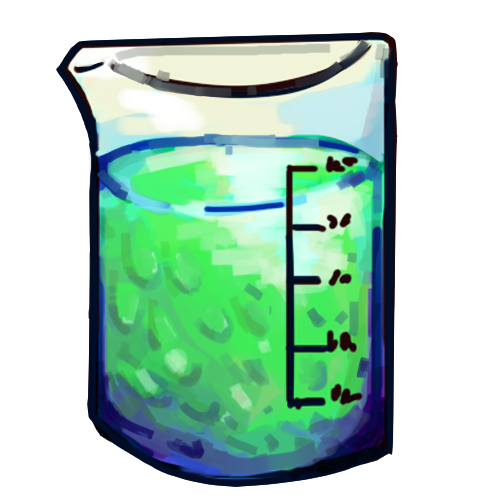 One day, a nobody Lab Tech by the name of Vaska G., her surname having been long been lost to he mists of history, Was doing her rounds investigating one of the runoff sites for signs of concern. Technically speaking the site was a horrific polluting dump, but by company guidelines it was perfectly acceptable, so against her better judgement she was going to write it off as "fine". It was at that moment that Vaska noticed she was not alone. A strange slimy creature had appeared near her. This was a strange occurrence, probably worth noting. Before she could go off to report this, several more appeared. Vaska was swiftly mobbed by the strange, squishy creatures, who engaged in what was later recorded in the annals of galooper lore as "The First Great Hugpile".

The "cosmetics" company couldn't stand for this revelation. Mainly, the presence of a new, possibly sapient, species in their highly dangerous "cosmetics" factory could vastly complicate what they were doing. So the company took steps to contain and/or exterminate the galoopers. What precisely happened then is uncertain, but according to galooper legend, Vaska returned at this point, from wherever she had gone before, and taught the galoopers how to fight. And while the truth might never be known, the galoopers certainly fought, They fought so hard they wrecked the entire factory, and the colonies, and more or less drove most of the quelan off the planet. And thus it was that galoopers took over the planet, which they petitioned to have renamed "Gishgallop", supposedly in honor of their "savior".

What happened to Vaska after that isn't known, legend say she lived the remainder of her life living with the galoopers, presumably because she was marked for death by the company for instigating a rebellion or something. The legend goes that, when she finally died, her body was placed in the first spawning pool, where she was reincarnated as galooper. Whether that's even a thing that can happen is unknown, but it certainly makes for a nice story.

Glowoop: A subspecies of galooper that spawned from much more energetic materials. As a consequence they are much more hyperactive and excitable, and have even more difficulty focusing on things than their comparitively slower cousins. Their bright, neon colored bodies glow rather brightly, to the point where some people need to avert their gaze.

Inksloop: A black colored galooper subspecies that spawns where a peculiar black ooze mixes with certain spawning pools. They are decidedly more mean-spirited than normal galoopers, having an unbridled joy of playing mean-spirited "pranks" and "jokes" on people. They're not very popular amongst their more kindly kin, mainly due to their ne'er-do-wellery, and general poor candor.

Extremogoop: A destructive subspecies created when the "cosmetics" company attempted to use a highly destructive compound to eradicate the galoopers. The compound had the opposite intended effect, as the galoopers it was used against absorbed the compound and became highly destructive monsters. Their body chemistry has gone overdrive and they exude a firey aura of death and corrosion that harms most things. Thankfully for folks with a fondness for life, extremogoop's hyper-active body chemistry end up drastically shortening their lifespan, to the point where few live more than a few years.

Heart of Ooze: All galoopers are formed around a core organ made of a solidified lump of esoteric chemicals. This organ is about the size of a pear and in the shape of heart and covered in numerous "writing flagella". As long as this organ is intact, the galooper is technically immortal, but unfortunately, their core is not particularly resistant to their own corrosive internals, and are usually dissolved beyond repair within fifty years, though this can be much longer if they spend time outside their bodies.

As long as it's intact, the galooper can be inserted into any sufficient mass of materials similar to a galooper "body" and form a new one. As the exact composition of a mass of galooper goo is rather eclectic and unusual, finding such a material outside of gishgallop is rather difficult. A galooper can form a body out a material with similar properties, but its ability to control it or utilize it is much more limited.

• Attempts have been made to nullify, or at least reduce, the causticity and cohesiveness of galooper goo. These attempts have generally resulted in the galooper's death, and, and continued testing in this line has been declared "very immoral."

• The Universal Food Safety Board has asked us to publish the following message: "The internal bodily fluids of the Slime Organism, 'Galoopers', is highly caustic, toxic, and generally unpleasant. Ingestion will result in death for most organic creatures in 10 to 12 hours, very painful, agonizing death.

• Galloopers are exceptionally fond of quelans, which is odd, given their species respective history, especially since the quelans on their home planet don't at all return the affection. 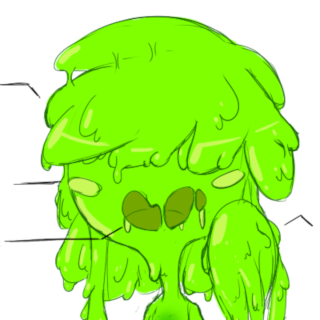 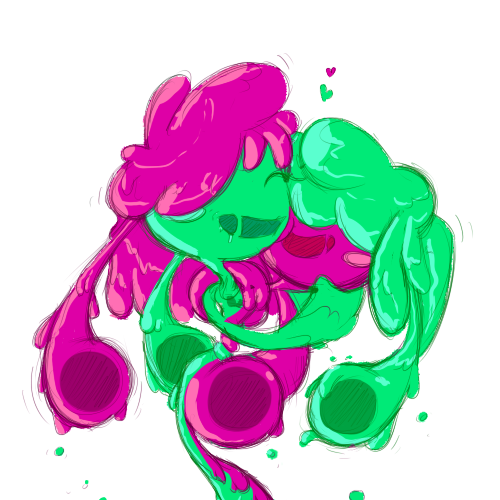 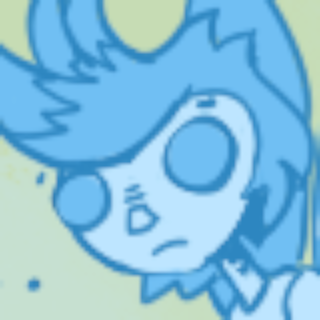