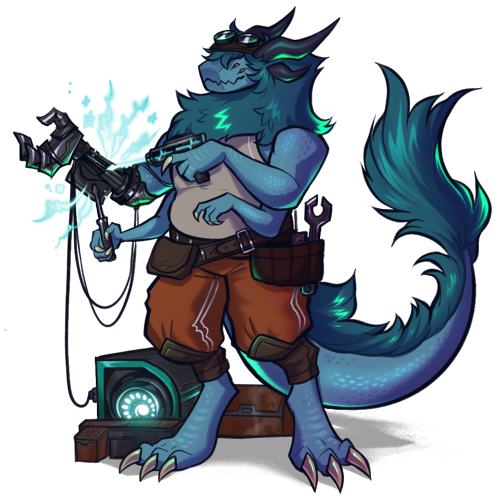 Attack Method: Run, and if cornered, use their strong legs to kick the attacker in either the head or chest.

The main population of gandorins don't worship any gods, but sometimes a religious nut will pop up, will throw out science and become a cultist that worships a concept, and is fully willing to sacrifice to their items of worship. These individuals are shunned for the well-being of the population.

Most gandorins will be born with skin that is a light shade of blue, though they can be other colors in the cool spectrum. On rare occasions, they may be born with warmer colors. Their fur is usually a darker shade of whatever color they are. They have big fluffy 'manes' of fur around their neck. This fur also runs down their backs and continues onto their thick tail.

The shape of a gandorin's head is commonly described as square or rectangular. This is because their snout is so wide and tall, making their head look square when it's more of a D turned on its side, when viewed from the front. They also have 4 eyes that can all move independently of the 'partner' eye on the same side of the face. Along with their four eyes, they have four horns protruding from the back of their head, which aren't used for anything apart from visually. Their horns can come in a variety of shapes and sizes, but will always be a dull gray in color.

The gandorins also have 4 arms, with 2 of them being larger, and the other 2 being shorter and smaller. The larger top arms are in the place one would expect to find arms on a bipedal species, with their smaller arms being under the larger arms' armpits. Gandorins generally prefer using their larger arms for doing stuff like hand motions or physical combat, saving their smaller arms for writing or holding ranged weapons. Their arms end with hands that each have 3 clawed fingers and a clawed thumb for a total of 4 digits per hand. Gandorins are commonly very tall, the shortest usually being around 6'11". If someone were to want find a gandorin's nostrils, they'd look on the gandorin's neck under all their fur and will find a pair of gill-like nostril slits.

They have digitigrade legs that are very muscular, although relatively thin, allowing them to run and climb quickly. They also have 3-toed feet with claws on each toe, similar to their hands.

Gandorins usually act very anxious and nervous around members of species from other planets, but they can teach themselves to calm down around certain individuals, usually their friends or crew members. Sometimes they'll be born into a family who doesn't teach them to fear aliens, and these individuals can easily interact with other species and be fine, and will often give hugs to their friends, or other people they trust.

When a gandorin is comfortable with the people in the room, they tend to be outgoing, but soft-spoken, and enjoy listening more than talking, unless the topic is on science or mechanics.

Gandorins are also highly intelligent, as well as inventive, and will sometimes make simple gadgets without paying much attention.

Despite the fact the general population is science-focused, it's almost guaranteed to see at least one good luck charm if you enter one's abode or workshop. These vary between each individual, but they enjoy having good luck charms around, even if it's just as a joke.

Long ago, most gandorins didn't believe in science, relying only on 'visions' from 'prophets' for knowledge, as such, they thought they were entitled to being the only sentient life in the universe. One day, a small group of individuals who thought 'hey, maybe this is bullshit' started doing their own research into the world and found there was an entire universe out there full of life. They taught more individuals and eventually quite a large portion of the population had given up on religion and moved to science. The religious leaders of their home planet found this blasphemous and started a war with the scientific community. The more intelligent portion of the community beat the religious side into submission with their guns, and overtook the rest of the population, with only a few religious nuts still existing.

And then, they made contact with an alien species, and they were so excited, so they celebrated, and invited the aliens to come visit.

Those aliens were the notails, and when the gandorins realized the notails were mostly just emotionless monsters who didn't see people as people, this terrified them into thinking that possibly the rest of the universe could be like these heartless beasts, and the majority of the population developed their xenophobia. They had passed down the stories about the notails for generations and now it's ingrained in the general public's mentality that alien = bad.

Nowadays, the religious cults are still kicking back at the general populace, occasionally kidnapping and sacrificing people to their items of worship. Unlike the old days where they worshipped gods, the cults have shifted to worshipping concepts, like the concept of time, the concept of souls, the concept of life after death, and more. This all is contained on their home planet, as these cults abhor anything to do with science or technology. Despite the cults only being on [the planet], it's considered safe, as the cults usually only consist of 10-14 members.

Their planet is semi-open to visitors, but there are strict rules and regulations on being permitted to land legally. The planet is host to bio-friendly cities, forests, mountains, and more wilderness. Their cities are far and few between, but those that exist are large, sprawling metropolises, full of greenhouses and labs. They absolutely despise destruction of wilderness without cause, and doing so is a one-way ticket to being kicked off the planet. Their cities are all powered by either solar energy, nuclear energy, or other clean, safe energy sources, as they hate ruining the environment.

• Most individuals of this species are highly anxious around members of other species.

• They are much faster than they look, and could easily dart away and climb somewhere to hide.