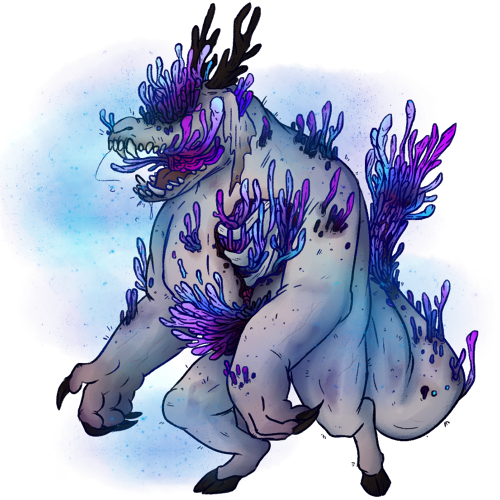 “The light was beautiful. It reminded me of stories from my childhood, dreams long forgotten. Had I not spent so much time relishing I would have never noticed the horrid leftovers of a man being dragged into the fog.” — Name removed due to request

Type: Vector
Danger Level: Medium
Commonly Infects: Small creatures such as insects or birds, before slowly moving up to as big as its cloud allows.

Attack Method: Works its way up the food chain before creating and hiding a horde of clockworks inside a cloud of infectious slime in gaseous form commonly referred to as the Fog of War.
Summary: The Umbra imitates bioluminescent fungal species, disliking sunlight and because of this, creating thick fog out of millions of infected spores to both obfuscate light and spread itself further. Rather than infecting through contact this species prefers to attack from the inside out, infiltrating the lungs.

The umbra imitates the shape and life cycle of bioluminescent species of fungus, perhaps in an attempt to camouflage itself as something else other than a clockwork infection. Most will not be able to see these qualities however, as they are almost always covered by an extremely thick cloud of spores very similar to fog.

Hosts of the infection will feature no hair, fur, or feathers whatsoever, extremely pale skin, and invading, unnaturally large fungus-like growths from head to toes, commonly having all orifices such as eyes, mouth, or nose obstructed fully as the infection originates from the inside of the body. As all their information gathering organs are usually obstructed by the umbra, it has always been a bit of a mystery as to how it is they sense their surroundings. The leading theory claims that the fog functions not only as a way to hide themselves, spread infection, and possibly communication (see: pheromones), but also as their sight and so, whenever something comes in contact with it they will know its position, size, and movement. This explains why hosts will never wander outside of the cloud even in situations in which they would have an overwhelming advantage as a horde.

One of the most interesting qualities of the umbra lies in the fact that its natural bioluminescent glow is designed to attract and instill feelings of safety and nostalgia in prey. Unaware bystanders will be easily drawn into the cloud with the dim blue glow only to never be seen again.

It is not uncommon for an umbra to take over an entire forest (or city) when unwatched creating a gigantic cloud of low hanging fog and a dim blue glow in what is known as an Enchanted Weald. Although considered a magnificent and mysterious sight by most, Enchanted Wealds are easily some of the most dangerous places in the universe as entering one means that every single creature inside of the cloud will know one's location at all times.

It is impossible to hide, and running will only delay the inevitable.

As a pseudofungus, the umbra dislikes light and tends to look for enclosed and humid areas in order to start spreading. This allows the fog it uses to infect victims to not dissipate as easily which means it will quickly concentrate and overwhelm an area if not taken care of.

The umbra prefers to create large numbers of hosts rather than a single gigantic mesh of flesh and this coupled with the natural fog cover they produce allows them to partake in hit and run tactics. Whenever something intrudes on the fog and doesn't get infected through the spores in the air, the horde will consider its chances against it. If the intruder is too big or too many to defeat in a simple mindless rush, the horde will attempt to stay as clear of the threat as possible, only launching small scale ambushes every now and then. Their unnatural coordination in such cases implies that they function as some form of hivemind.

It will start out humble, infecting insects or small birds through oral ingestion before using them to spread to the rest of the food chain until it eventually consumes the biggest creatures available. Once it has consumed all it can in an area the resulting horde will split in two, the wanderers and the guards. While the guards will remain in their birthplace for the rest of their life the wanderers will simply move about through open plains in search of new horizons.

Arae: While the typical umbra is slow, imitates the life cycle of fungus, and thrives in humid and cramped places, the arae subspecies works in an almost completely contrary manner.

The arae imitates beautiful crimson flowers, specifically those that spread their seeds, petals, and pollen far and wide through the use of wind, are extremely short lived, and infect through skin contact at an extremely rapid rate.

When infected one will start growing flowers out of the affected areas at a rate of 1 every 9 or so minutes and they will also feel an intense need to scratch off these flowers, only letting them spread further as bits and pieces that were scratched off are picked up by the wind once again.

Thankfully, the arae is a unique strain in that it will die off after a couple hours even when attached to a host, commonly going through entire villages with a gust like a flash fire and leaving just as fast. The aftermath usually includes a number of horrible scars both mental and physical on victims and a floor full of shriveled-up petals.

Structural: Although not a true subspecies, umbra attached to metallic objects such as structural support will attempt to spread themselves out across the surface of the object as far as it is physically possible for them.

It'd be easy to confuse this for simple mold if it weren't for the fact that they are always emitting small puffs of fog and a suspicious blue glow.

Double edged mist: Despite the fog the umbra creates being one of the most flammable forms of clockwork slime, it is widely considered a rookie mistake to light it.

The umbra evolved in such a way that its weakness became a strength as lighting up the gas will result in an explosion more than twice the original size of the cloud, which tends to commonly kill rookie clockwork hunters. Aside from this, it also has a chance of not completely obliterating everything inside the cloud and rather just launching pieces of the infected inside it far away which allows the umbra to just build itself up once more in a safe location.

In the early years of clockwork hunting, this posed a challenge to most as it seemingly forced one to go inside the cloud and fight the horde inside before dispersing the fog, which was an extremely hard challenge as the umbra delights in hit and run tactics inside this blue space. This is also the reason it is nicknamed the Fog of War.

While next to impossible to do when a horde remains inside enclosed spaces, most hunters simply drag a net across the cloud in order to corral and destroy the members of the horde as these are decently stupid outside of the fog and are unable to react aside from slashing wildly at the net and tearing some cords every once in a while.

Alternatively one can just have a lookout see where any pieces are sent in the off chance making the cloud explode is the best option.

• Because of their almost ethereal quality, Enchanted Wealds and their signature thick fog and blue glow appear commonly in the folklore of many species, problem is these are never so much as implied to be dangerous, commonly having a protagonist wander in only to find an enchanted sword or so, which leads many to believe that many ancient villages and cities easily fell to infections they were not even aware of.

• If your bathroom ever begins to emit unholy amounts of extremely suspicious blue fog, do not panic and throw a lit match in as it will very easily demolish most structures, instead call your local government so they can safely remove the infection.

• Although the arae subspecies is unique in that it is a passing infection most tend to survive, getting infected through oral ingestion rather than skin contact brings about an entirely stronger, quicker, and much more painful effect: should a curious animal happen to eat one, they will be subjected to constantly growing crimson flowers out of every single pore in their body at an extremely rapid rate, coupled with an uncontrollable urge to horrifically slash and tear away at every single one of them. Once dead, either through being overwhelmed by the flowers or by having scratched all the way to the bone and or organs, the victim will be left a featureless hunk of bright red flesh and petals in what is affectionately called an "Arae Bouquet".

-Back to Clockwork Menu-
< Corvus
Dryad >