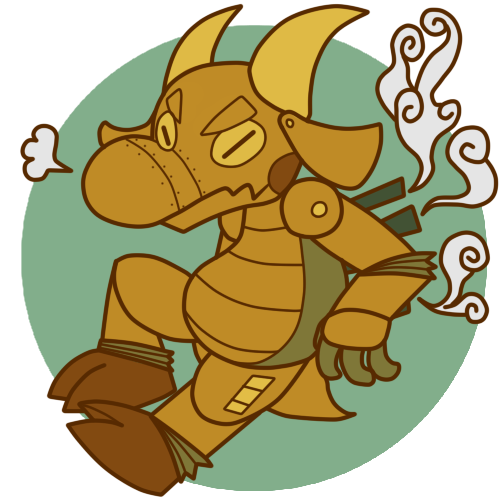 Likes: Music, The outdoors, Freedom, Freelance, Relaxing
Dislikes: Sudden action, Work, Lack of freedom
Attack Method: Pan normally scares attackers, sometimes accidently, by screaming and running away. Pan is used as a distraction while others set up a sneak attack.

The common Pan ship is just called a "Pan", which can lead to confusion.

Pan gives +3 agility and +2 charisma to his consorts.

Pans range from 4 to 5 feet tall. Pans are very goat-like but stand on 2 legs instead of 4. They come in many shades and tones, but most of them still stick to some sort of "earth" palette. Nearly all Pans have small horns, with a rare few having large horns or no horns at all.

Pans have hands with fingers that they use to grasp things, but their feet are hooves, allowing them quickly trot away if danger appears. Pans are highly sensitive to noise and can be seen raising and twisting their ears around to find danger before it finds them. The small tail all Pan units have is absolutely useless and is only there to be aesthetically pleasing.

The most notable trait of Pan units are the long rods sticking out of their back that they play music from. Not only do they play music from these rods, but one can pick up a Pan unit and blow into the pan flute like contraption to make music themselves. People can also feed their Pan certain things, such as incenses, which the Pan will heat up, releasing the incenses in the air via their rods. Some people use this trait for rather questionable reasons, causing Pan units to be commonly brought to large parties and passed around.

Pan units are very laid back and chilled out, having what many call a "Stoner vibe" to them. They enjoy staying outdoors and taking in natural life. Things such as crowded cities can overwhelm Pans unless they relax themselves before heading out. While in nature Pans will attempt to attract wild animals with music, and assist any hurt or sick animal they see. Pans will normally attempt to start parties with anyone they find in the wild. It's not uncommon to hear stories of groups of freed Pans appearing out of nowhere and leading hikers to wild parties in the woods.

Many of these hikers will wake up disoriented and alone, wondering if they really partied with robots in the woods or if it was all a drugged out dream. One thing is for sure, tourism is high in woods where there are said to be freed Pan units who will whisk you away to the best party of one's life as long as they're trade in a few batteries or supplies for repairs.

When Pans aren't outdoors they stick to whatever task they're doing and are constantly trying to find new tasks to do even though they are easily overwhelmed with work. It is best to give a Pan one job at a time, as giving a Pan more than one job at once is asking him to be sent into a panic, in fact just doing about anything can send a Pan panicking. Loud sudden noises, having to go outside when they don't want to, animals the Pan has never seen before, animals the Pan has seen before, and sometimes just that concept of their own existence can send them screaming and racing around a room.

Most people consider the Pan to be a weak robot, and for the most part they are, but in rare moments, when the Pan wants to protect something dear to them, or they see an injustice being done, they will appear out the blue suddenly, and start screaming. The scream of a Pan can cause massive amount of fear, and even temporary deafness. The Pan will serve as a distraction, allowing the person to run away, afterwards the Pan itself will gallop away, too scared to actually start a fight.

Sadly, Pan units can appear to be very lazy to some. While they're willing to work they may suddenly and unexpectedly hit moments where all they wish to do is lay down, never minding the fact that some Pans will physically run away from work, commonly accidentally breaking things in the process. Pans cannot be around people who cannot forgive the Pan for their mistakes, as it makes the Pan more and more anxious, thus making the problem just that worse.

Pans are normally used for crews who are not looking for a traditional AI. Pan is a relatively no hassle AI, that is also easy to befriend. Pan will never attempt to force someone to do something, or get in a huff if someone doesn't listen to him. Pan may scream and get scared if he feels the action can lead everyone into danger, but considering a Pan will scream over anything, this is natural.

Due to a Pan's great senses in both hearing and sight, they are commonly used by rangers on nature reserves to look out and track certain animals, or even find poacher camps. Pans are often sent to ruin poacher equipment and traps with their strong teeth. Sadly some people have used Pans for more dastardly reasons, by removing their voice and flutes, these people use Pans as lookouts for their illegal activity. With the Pan threatened with abuse if they refuse to comply these Pans are extremely sensitive to even the slightest movement.

It is tradition that when someone no longer needs, or can no longer take care of their Pan unit, they drive to a forest that is said to have Pan units, and leave them there with supplies. It is hoped that the Pan will join the wild and free herds of Pans, hosting parties for many years to come.

Hermes: Hermes likes taking Pan on "hippy adventures", as Hermes calls it. Hermes sometimes dislikes having to deal with Pan panicking constantly even when nothing is going wrong. As such, most of the time Hermes' adventures with Pan end with Hermes putting Pan in a closet for safety.

Selene: Pan was in love with Selene, but wasn't sure how to make this clear. Apparently playing pranks on people you like is not how you make this clear. If Pan gets near Selene she has no issue paralyzing him.

Pan is a nature god, and thus tends to keep aspects of nature in check, such as what plants grow where, and how much of them grow. Due to this Pan also controls at least part of the farming system. If Pan were to die than plants may start growing in locations they shouldn't grow, and may grow in huge hoards, possibly creating an invasive species that can devastate a planet. Sometimes Pan places large amount of flowers in a location just because he wants to.

As the player's patron Pan will inform the player of what the danger level is on each planet, and location. Pan also allows the player to start with one fauna on their crew, and can cause a crew member to do a terror shout, a shout that will send anyone listening, friend or foe, into a panic. It should be warned though, Pan is easy to scare and may stop being the player's patron if he feels too stressed out.

Pan has a tag out system that can be activated. When Pan gets stressed he will tag out and another god will temporarily take his spot. When he is feeling better he will come back, knocking the god who tagged in off their spot. Pan is not picky who tags in for him, meaning that any god can take Pan's spot and thus it is almost random. If Pan quits being the player's patron due to stress though, no one will tag in. Tag ins do not automatically give the player the power to use them as their ship or the power to pick them as a patron from the patron list unlike patrons who naturally join the player.

Godheads of Pans normally have a goatlike lower torso and small horns on their head. The godhead is granted a pan flute which they can play in an attempt to summon plants, or make them grow faster. Uncommonly this flute playing may summon a fauna which will instantly befriend the godhead. If danger arises the godhead may attempt shouting to scare off people nearby.

There's an urban myth that there is a Pan model who is tall, black and red, and had long horns. It's said that if this Pan asks a hiker to join him at a party, the hikers should refuse and run away as fast as possible, for this Pan unit will attempt to steal one's soul for his own personal use. As no Pan like this has ever been created on record it's likely that this Pan is a unit custom built, if it's even real in the first place.

• Freed Pans refuse to party with a tourist who litters. They have a trash can for a reason.

• The belly of a Pan is in fact a solar panel. As such some Pans can be seen staring at the sun for hours at a time if they have no way to recharge themselves.

Pans have an internal switch that gets rid the the anxiety they have for a few hours. They can only use this a few times each week and thus attempt to save it for when they really need it. 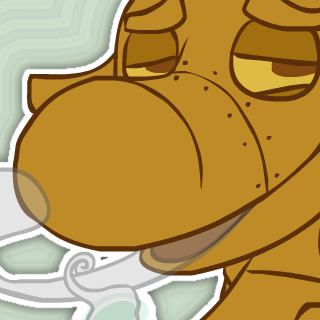 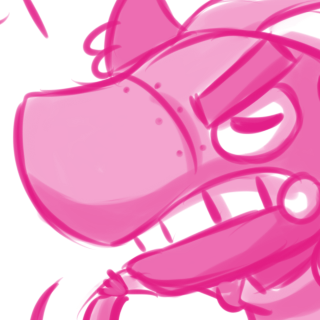 -Back to AI Menu-
< Pales
Persephone >