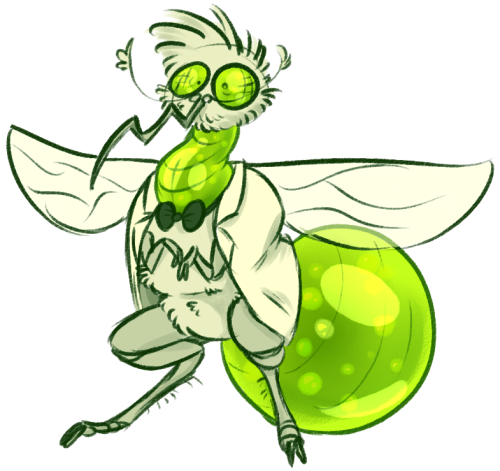 Attack Method: Detix may inject an opponent with a disease if they are carrying one. If not, detix will likely attempt to flee rather than fight.

[Honest] Neutral trait
This character cannot bring themselves to mislead others, and will try not to keep secrets from fellow crew. Most will appreciate their honesty, but it can anger others or even land them in trouble if they aren't careful.
[Iron Stomach] Positive trait
This character can resist or is outright immune to the harmful effects of ingested substances.
[Intrusive] Negative trait
This character has no sense of personal space and might do rude things like going through people's belongings, touching people and asking personal questions. This can be tiring for their fellow crew and could get them into deep trouble.

Standing at roughly 6 inches, the detix are a race of small bipedal insects who possess an enlarged abdomen capable of holding liquids, diseases and viruses. Detix have two arms and two legs, their arms being very small in comparison to their legs, which are built for hopping and jumping. They have two wings on their back, strong enough to carry a detix even when their abdomen is full. "The mouth of a detix is similar to a hypodermic needle, it's pointed end often so sharp that it can pierce through tough hides of other creatures. The saliva of a detix has a specialized chemical meant to numb the area of penetration, as once they are done with the task of injecting or receiving a fluid, the spot may feel a numbing sensation that may persist for hours.

The most prominent feature of the detix is its abdomen. The skin of the detix's abdomen is similar to reinforced glass, as the texture of the skin is hardened and translucent. Their neck appears to be of the same properties, however it is not nearly as tough as the skin of the abdomen so the detix may move and crane their neck with ease. The fuzz covering a detix come in shades of black and white and everything in between, however their abdomen's colors have far more variation and may come in nearly any color or color combination. A detix may "drop" their tail, which is a natural response to stress and panic when avoiding a predator or avoiding having their abdomen shattered while still attached to their body. They may also willingly drop their tail if the circumstances call for it, but may need time to recover and regrow their abdomen, taking about one to two weeks for it to reform to full size.

Although they do not have a proper mouth or vocal cords, detix may rub their wings together to produce sound and language, and are able to mimic spoken word through wing rubbing. Most other species will describe this particular form of speech to be heavily 'accented', and detix just learning to manipulate their wings to form words may be very difficult to understand. Detix native language is done in the same manner, consisting of different pitched buzzing and chirping.

About 80% of all detix take up a job in medicine, whether it be physicians, pediatricians, nursing, etc. What people find most apparent of the detix is their innate ability to decipher symptoms from rough descriptions, and pinpoint afflictions even in species who's anatomy differs far from their own. Detix are puzzle solvers at their core, on a constant look out for abnormalities and ailments in others so that their specific abilities may be put to good use. As a highly social species, keeping their friends,family, or crew members in peak health becomes their highest priority.

They will also consistently, however maybe without the same amount of urgency unless it is their profession, show this type of behavior towards strangers as well. Those who have encountered a detix in such a way will often report them as being extremely friendly but overall far too intrusive with their questions. Most detix will back off from a non-consenting perceived 'patient', others may continue to pester until they are able to continue on with relieving them of their illness or is effectively swatted away.

Detix that do not practice medicine are hard to come by outside of their own home planet. These fill in the rest of the niches left untouched by the many doctors that span the universe. They are most recognizable by the decoration of their abdomen, which is often done by holding colorful liquids inside of themselves. Some manage to also ingest glitter or otherwise small objects to create what could only be described as an "organic snow globe" effect. A colorful and glittering abdomen is highly desired within detix communities, however is seen as unprofessional in the workplace as it's often utilized as a tool.

The history concerning the detix is fairly short, as their introduction to the space age was a more recent occurrence and records of actual detix history is hard to come by. Upon being discovered and introduced to the space age, detix were seen as more of a novelty or even a commodity in some cases, sought after for their innate ability to seemingly cure disease on command. Crews all around the universe would seek to enlist a detix into their crew as a living medical kit.

As time passed, detix would become more widespread across the universe, and the trend of having one on a team would die down enough for them to slip into actual medical positions on different planets. Today, most medical bays/hospitals will have at least one detix working under their wing, as well as a significant amount of detix dabbling into medical science to help develop cures for diseases not easily handled by the detix themselves.

The detix hail from a planet named Haemophere, which is an extremely large, red and dusty planet, with a mildly humid climate all year round. Populated not only by detix, Haemophere is also home to a dense population of large, slow moving mammals that act as the detix's main host, providing them with a home and a steady supply of blood as sustenance. These creatures, often referred to as "the beasts of burden" or "mobile cities", are often thousands of times bigger than the detix themselves, which have taken to building their communities on the backs of their hosts.

Detix will congregate to the largest specimens, building cities and towns directly onto them, with the creatures seemingly oblivious to the growing population of insects and homes clinging to their fur. In return for using their body and blood, the detix care for the animal by grooming and freeing them of all disease and malaise that they may encounter on haemophere, which is infamous for being rampant with contagious disease.

Smaller instances of the beasts of burden may house only a family of detix, or even just one detix. These are fiercely protected by the detix that house them, in fear of being kicked out of their own home by another detix looking for a new host. Detix may be highly territorial as well with feeding grounds for their host, taking up biological warfare by injecting fatal diseases into another detix's host that are too close or otherwise unwilling to leave the claimed area.

On the other end of the spectrum, there are detix that make their living off of breeding beasts for specific traits and qualities for those looking to purchase new homes for their growing family. These hosts however, are not often seen outside of haemosphere, as due to their highly detix-dependant lifestyle and specific diet, most will not live much longer than a few months out in space travel or on other planets.

The Living Syringe: Depending on the size of the given individual, a detix may hold, without any harm done to the detix themself, one to two diseases that is taken from another individual. Anyone carrying a disease may be cured by the detix assuming they have room to carry it, and the detix may also infect via injection another with the one to two disease(s) that it holds. Any more than two will begin to adversely affect the detix, and will develop symptoms of any of the illnesses that it carries within itself, until it is able to inject another with them.

Detix may also carry other liquids in its body, usually without harm done to the detix within a reasonable range, for example molten metal will kill a detix, however most chemicals will not. The clockwork virus cannot be carried safely by a detix, and will always be fatal.

• Since their original host species will not survive outside their planet for very long, space faring detix may gravitate towards warm blooded folk, in an attempt to set up the same symbiotic relationship they would have normally. Detix can survive without a host, but feel more comfortable when riding on someone much larger than themselves.