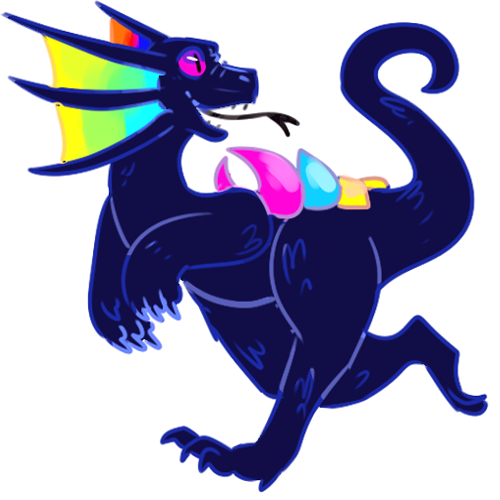 “Sir, I think we're being watched...” — An arma soldier, shortly before her squad was attacked

Attack Method: Overwhelm them in the dark. Toxins are only used against much larger foes.

[Nocturnal] Neutral trait
This character can be found asleep during the middle of the day, when the rest of the crew is active and doing things, and awake at night, helping to keep watch over the rest of the crew. Like with most sleep cycles, the character can be forced to a schedule that isn't this, but will be more irritable and grumpy until normal sleep is resumed.
[Getaway] Positive trait
This character always seems to slip away at the last moment. Whenever they are in a group, they automatically escape if they try.
[Photosensitive] Negative trait
This character suffers from extremely poor eyesight, or total blindness in normal or high light conditions, and may even suffer pain from looking at light.

The Frilliz believe in the Neo and the Singer. They believe that the Neo provided them with the traits needed to survive on their planet, while the Singer, they believe he gifted them culture. Frilliz often sing songs after successful hunts to honor their gods.

The frilliz are small, lizard-like creatures, often switching between being quadrupedal and bipedal as the situation demands. They have four limbs, each one ending in four-toed paws that sport short but viciously sharp claws. Their bodies are covered in small, thin, interlocking scales that range in color, with the only thing remaining similar between them all is that their scales only come in very dark colors. Pure black frilliz are rare, but not unheard of. Patterned or multicolored scales are much rarer, with patterned frilliz, known as runed frilliz, being prominent in the selling of the species as decorative ornaments. Runed frilliz are not a recognized subspecies, as the only difference between runed and common frilliz is coloration.

The eyes of frilliz vary in color nearly as much as their scales, coming in much brighter, almost neon colors, and have a single, slitted pupil. These eyes let off a very faint glowing light that matches their eye color, and can see amazingly well in the dark. Inversely, even the light of a commercial lightbulb is incredibly painful to a frilliz, while extended exposure to brighter lights can cause an array of permanent vision impairments.

Protruding from back of a frilliz's head are 5 to 8 rectangular plates that grow up to 2 feet long and end in points. These plates often overlap over each other, protecting the back and neck. These plates can also be raised and fanned out to reveal a colorful frill of bioluminescent skin that is often used for intimidation and courtship. Unlike scales, most frills are vividly patterned, with the most common being spots of pure black skin providing contrast to the bright display.

Frilliz have very, very little sexual dimorphism. The only way to tell them apart is by the color of their frills. Females tend to have cooler colors dominate their frill, such as blue, purple, and green, while males sport warmer colors, such as red, orange, and yellow. Many frilliz looking to change how they present often get pigmentation recombination therapy to change the coloring of their frills.

The mouths of frilliz are lined with short, sharp teeth that are designed to be smooth and easy to remove from flesh so that the frilliz can make multiple attacks in a short amount of time. Located under their forked tongues is a tube leading to the frilliz's venom gland, located where the head meets the neck. This venom is a highly concentrated neurotoxin, and is typically only used against enemies much stronger than the frilliz.

Frilliz are an incredibly family-oriented species, forming small tribes out of family groups. They share everything that they have with each other amongst their tribe, and honor the bonds of the tribe above all else. When alone, frilliz are very prone to depression, anxiety, and the numbing of emotions, but this can be avoided by establishing close-knit relationships with other species. It is noted that species with similar appearances to frilliz will be more easily bonded with.

Frilliz tribes operate in a loose hierarchy system, with the alphas ruling the group, their oldest child and a selected frilliz from a different tribe being the betas, and the rest of the family being subordinates. When both alphas die, the betas will take over in their stead. If two non-beta frilliz from different tribes meet and fall in love, it is tradition for the two tribes to combine, with the alphas from either tribe competing against each other in a variety of contests, ranging from simple strength contests, to seeing who can spit their toxin farthest and most accurately.

Exiling members is rare in frilliz society, as depriving someone of their family is seen as one of the most grievous punishments possible.

Frilliz pups are often named after the first thing the pup sees when it opens it's eyes for the first time, which happens about a week after hatching. Examples of frilliz names include Red Flower, Leaf Litter, Sunlight, and Bird Skull.

On their homeplanet, frilliz often communicate in their species' main language, composed of a series of chirps, hisses, and clicks, as well as body language such as foot tapping, tail waving, and opening and closing their frill. Frilliz not raised by other frilliz will not know how to speak this language, as it is strictly only taught to frilliz. Their language is one of the things frilliz take the most pride in, and would gladly choose death over teaching it to a non-frilliz. Frilliz who know this language may often use it accidentally when highly emotional, or may replace words they do not know in limlish or ornohrs with the sound for it in their main language.

The society of the frilliz developed almost entirely separate from the rest of the universe. So many terrible stories of crews landing on Sianope, only to be attacked by swarms of shadow beasts and dragged into the underbrush, never to be seen again spread that most avoided the planet like the plague. It was only when a Zeus ship full of scholars, diplomats, and reporters arrived that any information was able to be retrieved. The frilliz originally had different names for their gods before being told the true names of the limbo gods. The Neo was known to them as Cycle, and the Singer was known as Communa. The frilliz believed that Cycle and Communa walked amongst them in the shadows of their planet, the former assisting them with their hunts and keeping the balance of life and death in check. and the latter joining in their merry songs at the end of a successful hunt and quieting their movements through the underbrush.

Even today, if one askes certain frilliz, they will tell you that their names truly are Cycle and Communa, and that the rest of the universe has gotten it all wrong. When asked what the true names of the other gods are, these frilliz will simply shrug, and say, "They haven't told us yet."

Frilliz only received species rights within the past 1000 years, due to their primitive lifestyle being largely regarded as one of fauna, but they have been doing the best they can to learn about the stars.

Sianope is the smaller planet of a two-planet system. It is almost entirely covered by thick jungles, though three oceans can be located on the planet. None of these oceans touch each other.

Sianope has no axial tilt, thus making it have no seasons. It is always humid and mild almost everywhere on the planet, being only several degrees warmer near the equator and slightly colder near the poles. All of the species on Sianope are, interestingly, either nocturnal or aquatic. The fauna of Sianope is also rather hostile, with many attempts to explore the uncharted planet ending in tragedy.

Nightcrawler: Nightcrawler frilliz are similar to their common cousins, but nightcrawlers are arboreal, rarely touching the ground, and instead of a frill, nightcrawlers have rubbery, bioluminescent quills that can be raised and lowered. It is said that if the trees are lined with spiky, glowing vines, and there is hissing coming from the canopy, turn around and run in the opposite direction, although it may already be too late.

Monitor: Monitor frilliz live on the exposed coastlines of their homeplanet, and tend to only come in neutral colors, such as white, black, brown, grey, and beige. They retain the frill their species is named after, though it rarely glows. The venom glands of monitors is located near their sinus cavity, thus making the toxins spray out from tubes in their larger front teeth.

Toxin Spray: Frilliz can open their mouths and, provided they are not dehydrated, can spray varying amounts of an incredibly deadly neurotoxin from their mouths. This toxin causes near-complete paralysis in it's victims within 25 minutes of entering the body, and death at 45 minutes. In order to counteract this toxin, the blood of a frilliz must be used, as it is the only substance containing the antivenin required to nullify the poison. Note that frilliz are still vulnerable to all other types of poison, and that this toxin will not affect AIs.

• Frilliz are rarely territorial amongst their own kind, often meeting with other tribes and befriending their alphas. The contests between alphas when two tribes merge is less to decide who is better, but more to decide who will be in charge. That being said, even the losing alphas will still have a great amount of respect within the blended tribe.

• Frilliz tribes are often named after a combination of it's founders' names. For example, if the two frilliz named Broken Branch and Rainstorm created a tribe together, their tribe could be known as Raindrops On Fallen Branch.

• Frilliz that do not know their home language are often regarded as a tragedy missing a piece of themselves by members of their species that do know it. 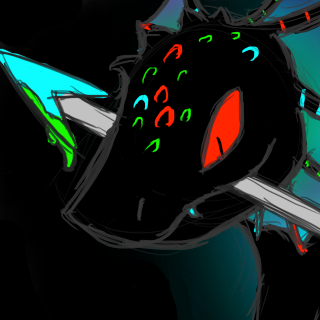