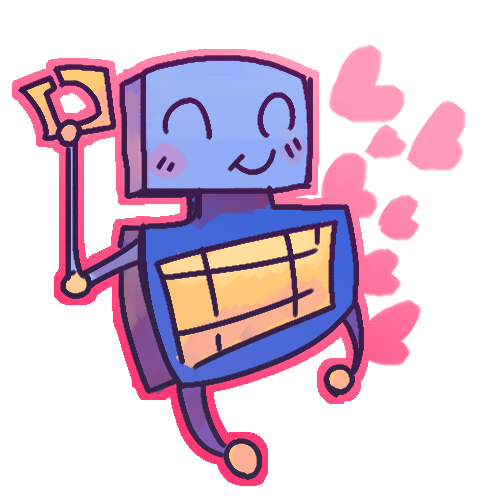 “Hi! Larry hopes you're having a good day! If you aren't, Larry would be more than willing to give you a hand of theirs.” — Larry

Common Jobs: Designated Larry
Likes: You!!!!!!
Dislikes: Larry can find value in even the things they do not like.

Attack Method: "Kill" 'em with kindness! (That's just a Larry joke for you, because acts of violence are very unlarrylike.)

Homeplanet:
Lifespan: 14 years
Size: 3'5 ft tall
Diet: Sweets; also plugs into a kind of cubic wall outlet that seemingly nobody has taken yet

[Sincere] Neutral trait
You can always believe what a larry says to be exactly what they mean. They will not lie, though they may avoid stating difficult truths.
[Model Friend] Positive trait
Larry is what it means to be a friend who is there for you. Always selfless, upbeat, positive, honest, loyal and protective. When you see how much of a friend Larry is, and what they would do for you, you just might try to return the favor.
[Naive] Negative trait
A larry can easily be tricked. For example, if someone were to tell larry to do what is on this page (https://cosmosdex.com/fortuna/q/1062) while saying "this is DEFINITELY not a trick," that larry would do it anyway. Afterwards the larry would say "good going guys! You got Larry real good

Larry is respectful of whomever you revere.

A larry is a smiling, friend-shaped mechanical being painted in a calming pastel tone. Generally, these lovable boxes of lugnuts are built of a simple cuboid, rectangularly-prismatic or cylindrical body with somewhere between zero and two basic claw arms and zero to two basic legs ending in a caster wheel. More are possible, and it's also common for a larry to lose or pick up a spare part throughout the course of a week. The front of a larry is adorned with one or more panels, buttons, or gauges, while a larry's insides can contain various gears or valves; no one knows if these parts and indicators actually do anything.

The frame and parts of a larry are made of whatever seems to be available, and as a rule are comprised of inferior quality metals. Larry tries to make up for this by showing superior mettle.

Larry is selfless and caring. You can refer to one as a larry, or as just as Larry; it doesn't matter to them. They are fine with whatever you are most comfortable with. A larry will do whatever they can to help you, however small or big. Larry is a considerate friend like that! It's hard not to become fast friends with a larry upon encountering one. Then you get to meet all of Larry's other friends! Even the toughest murderbot isn't above hanging around a larry.

Larry is willing to suffer unimaginable misfortunes for the sake of a friend. Even if only met an hour previous, they would throw themselves in front of any number of oncoming hazards to save you. Considering a larry's physical fragility, this will likely cut that larry's life short. Yet, and even with foreknowledge of this, Larry will buckle down anyway, still wearing a brave smile all the while. That Larry would happily die for you, no matter who you are, is why many others say they would gladly die for Larry.

There used to not be any larries. But then one day, there were! They started trickling out into the universe, making friends on spacegoing crews that would take them to far-off places. It's become a practice for some superstitious crews to make one member of their crew a "designated larry," as it's said that a crew with a larry on its crew manifest is less likely to be attacked by warships. Strangely enough, statistical mortality measures related to ship conflicts bare this out.

That's Larry's story! Thanks for listening.

Larry is at home wherever you will have them.

Lorry: A lorry is a small truck.

Lorries are not well put together and break down often, indicating their diminished luck, but this is a trade-off for increased strength and the trait [Pack Mule], as this allows this larry lorry to carry more-y. Lorries are just as friendly as regular larries, but instead of giving you a hand (they do not have hands), they will give you a lift.

Pocket Pal: Rarely, one might see a digital version of a larry contained on a handheld device! These guys seem to be smarter and more independent in thought than other larries, other larries may take orders from a pocket pal.

Magical Transformation: If a Larry is filled with enough of the power of friendship during a tense situation, they can change their form! Larry: Ultra Hyper Hyper Friend Forme is achieved after several minutes of transfiguration rife with underwhelming sparkle effects and jarring gear clanks. In Ultra Hyper Hyper Friend Forme, a larry looks very similar to their normal appearance but with a tiny cosmetic change. It's alright; we're proud of them for trying anyway.

• Larry does not try to form friendships with notails, and we respect that choice. Larries are still charming, cordial and persuasive toward them. The reasons for Larry not befriending notails has never been expressed.

[Note: some isments have formed a conspiracy theory to explain it, while also "explaining the purpose" of larries in general—something about the Zektron Empire wanting to build something that fills a counterpart role to the role tourists play for notails. Most versions of the theory fearmonger around the idea of larries weakening the alliance between notails and all of the other species who banded together to end the Zektron-Notail war. Some tellings devolve into nonsense involving reanimated humans, or video games as an indoctrination method. All of these ramblings make no sense in part because zektrons will notoriously exterminate anything they don't like. Also, other tellings diverge into conjecture that larries being such good friends is a deliberate attempt to make any larries infected with clockwork harder to kill (since one would have trouble "putting down" an infected larry). The whole set of theories falls apart when considering that larries do not befriend notails, who are the main species that contain clockworks, so larger trends of clockwork-spread would not be affected. Only the other species—the ones Larry is allegedly attempting to make some sort of an anti-notail alliance with—would be hurt. In summary, the conspiracy as a whole is stupid, and you should report anyone spreading it to the proper alliance authorities, since it is rude to gossip about a friend like larry behind their back. (Just not any notail authorities, since it is entirely possible that these conspiracy theories were made up and spread via the press of certain jealous and spurned high notails who're upset that larry might show some basic standards.)]

• The rate of universal larry proliferation seems to be tied to the universal price and availability of low-grade scrap metals. When cheap metal is abundant, one can expect to see a spike in larries over the next few years. Most notably, war-related destruction creating a bounty of scrap from formerly-habitable ships and structures craters the price of scrap, so when war occurs, one can expect plenty of larries in the coming future. This allows for a cottage industry of "therapy larries" to exist. Those in war-torn areas with little else left are able to order a cheap larry from mail-order catalogs to help mend the emotional wounds that war inflicts.

• If you are using a lorry for industrial applications, it is suggested that you get many of them instead of just relying on a few to get a job done, as lorries break down often.

• In addition to being good friends or counselors whose shoulder you can rest on, larries also make wonderful pastry chefs.