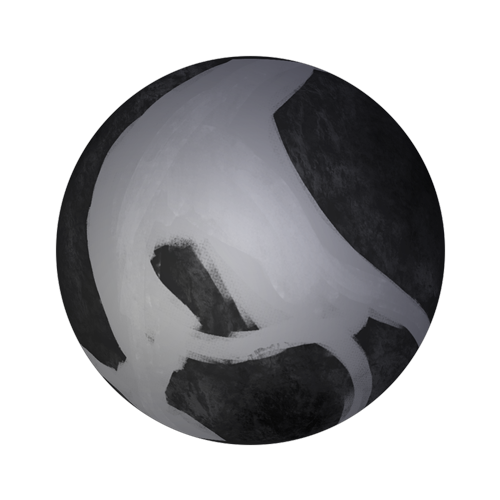 “I felt miserable and more than a little anxious the whole time I was there, it was amazing!” — Tourist guide to the universe

The homeworld of the oomn might possibly be the only thing more depressing than the oomn themselves. It's an Earth-sized and Earth-like planet that's completely gray, utterly monochrome. Its most notable natural feature is that it's constantly overcast and frequently raining to various degrees, which just completes the bleak mood of the planet.

The whole planet feels very abandoned as well, dotted with the various towns and cities of the oomn which, while weathered from age, were plainly abandoned rather than destroyed. The most particular feature of the planet, is a massive Black Cube, several kilometers across, sitting in the middle of one of its continents. It was determined to be hollow, and thus explorers set to work on breaking it open. During this time it was affectionately named 'The Lockbox'. When they did eventually open it, a city was revealed, along with the entirety of the oomn race.

The planet's surface is divided into six continents divided by bleak unwelcoming seas, which feature a fairly wide array of environs that are each miserable and/or foreboding in their own particular way. Whether it be desolate windless fields, unreasonably dark forests, or biting tundras, each offers it's particular brand of misery. It has a singular fairly large white moon, called O'pal that can be seen through the cloud-cover on exceptionally rare occasions.

The history of O'Clair prior to the opening of the lockbox is largely unknown. What little is known, illustrates that neither O'Clair nor the oomn were pitiable little balls of sorrow they are today, though how and when that changed isn't know to anyone, least of all the oomn. The establishment of the lockbox itself is also a mystery, who built it, and why, though it is theorized that those two mysterious events may be connected, though nothing definitive is known.

More concrete history begins with the opening itself, where an unwary and fearless band of alien adventurers, set off to explore a scary and depressing alien planet, discovering an intimidatingly large box. Which, was eventually opened, with great effort, and not a few losses. To the surprise of just about everyone, discovering the entirety of oomn civilization, who reacted with a peculiar combination of terror and glee that some people refer to as, 'oomnity'

In the time sense, the oomn have attempted to reclaim their former home, with great timidity. To say it hasn't gone particularly well would be a bit of an understatement, as they more or less have failed to actually reclaim most of their planet any significant distance from The Lockbox, due to a combination of dangerous fauna and...weirdos.

D'Sperat: The capital of O'Clair, and most populous city, built in and around the mysterious Lockbox. The parts inside the Lockbox are as old as everything else on the planet, but the parts are fairly new, representing timid attempts at expansion in a post Lockbox world. The the city is intimidatingly gloomy, particularly the inner 'old city', where the sky is represented rather crudely painted along the walls and ceiling of the object. As the center of oomnish affairs on the planet, it is a hot-spot for the ongoing debate over whether the oomn should just retreat into the Lockbox or not, resulting in a tense, well more tense, atmosphere.

D'Solat: The largest city on the planet, and all but completely abandoned. Presumably it was the capital from the age before The Lockbox. A massive metropolis of derelict sky-scrapers and desolate homes. Like most cities on the planet, the only damage is due to the weathering of time, it's gloomy and foreboding, a dark edifice recalling a vastly different time. While seemingly uninhabited, visitors report strange, smiling beings wandering parts of the city, and people who visit those parts are never seen again.

Flip that frown, upside-down: Within the darker, more mysterious parts of the world, there exist mysterious creatures, known only as 'The Joyful'. Nobody knows what they are, because anyone who looks to closely into them, mysteriously vanishes. What is known, is that they appear to be pitch black humanoids, with no discernible features save for a stark white mask, which itself features nothing but a large 'smile' if it can indeed be called that. While their motivations are inscrutable, they are believed by some to be responsible for kidnapping oomn, who largely believe they are taken to be converted into more of these 'Joyful'.

• A group of oblein set up a wellness clinic in D'Sperat due to concern that the oomn were not properly taking care of themselves. This eventually grew into a fairly sizable minority of oblein living on the planet.

• The planet is a popular spot amongst darkly inclined artists due to it's naturally bleak and depressing atmosphere, "tres profond" as they like to say.