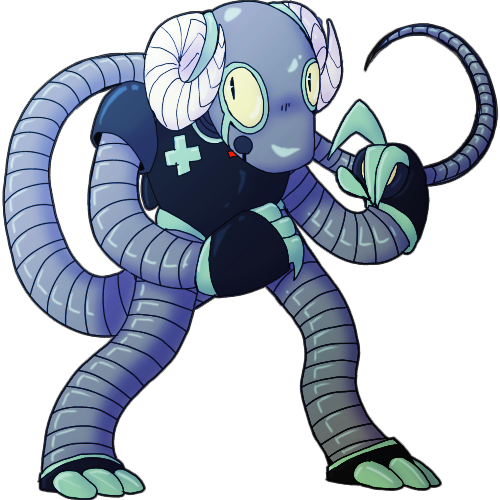 “Have you ever seen one blink? Someone told me once that if you catch one blinking you'll die instantly... or was it that it'll bring you good luck?” — A tegyp when asked their thoughts on Vejovis units

Typical Vejovis ships are referred to colloquially as a "Bugeye", referencing a Vejovis unit's iconic stare. In groups, however, they are referred to as a "Swarm of Vejovi." Typically the only time these hospital ships are deployed in great numbers are in the instances of plague, war, or other tragic events with high death rates. As such, there tends to be a negative connotation around this term. The ship can only support 8 crew members with the rest of the seats saved for the sick.

Consorts of Vejovis gain +5 to either intelligence or endurance.

The shells of Vejovis units were initially prototyped using a host of spare parts from manufacturing Apollo and Jupiter units. While nowadays there are some facilities that provide custom parts, most Vejovis units in standard use still follow this principle and may run a range of appearances based on the availability of parts. The only universal design traits tend to be the spiraling goat-like 'horns' and large unblinking eyes that the majority of these AI sport. Though they can appear a bit, off-putting at times, they are well known for their soothing tones when speaking. These "deadpan stares" are just how these units scan for potential dangers and possible patients in need of assistance.

Most Vejovis units are digitigraded and bipedal. They tend to have two or more arms tipped with high-precision finger-like digits that end in almost needle-sharp points. The fine tips allow them increased dexterity when working with small implements such as most forms of archaic surgical equipment.

The "standard" build, or most commonly observed shell used has a serpentine head and tail, with a tanky chassis reminiscent of a Jupiter model. All models have a plus-shaped marker somewhere easily visible in order to denote them as medical personnel.

Though typically rather diminutive, these units make up for their stature with telescopic limbs and powerful servos in order to be able to assist as wide a range of creatures as possible. Their long tails are used to regulate their centers of balance when carrying large or heavy loads and are fully prehensile, often acting as an extra, less proficient, hand.

Their primary hands and feet are equipped with electromagnetic devices that allow them to scale metallic surfaces or stick to the outsides of spacecraft, and their flat paddle-like claws on their 'feet' allow them to easily navigate both sandy terrain and semi to fully aquatic areas. A regularly seen upgrade is the addition of low power thrusters on their backs to assist with traversing low-gravity to zero-gravity zones. They're built to traverse and function in a wide range of environments and can withstand temperatures from below the freezing point of nitrogen to above the boiling point of iron. Even still, it is not unusual to see particular units that are constructed to be more compatible with certain environments.

At their cores, Vejovis units are driven by a combination of curiosity and a thirst for knowledge. They take just as much satisfaction from treating living patients as performing autopsies. One might ask themself if a Vejovis is a killer or a savior, but typically it's not so black and white.

Ethics are of little concern to an AI dedicated to furthering solely medicinal arts before the comfort of creatures in its care. It is not unheard of for patients to be kept alive for much longer than recommended to become test subjects in a study to see just how long their condition can be dragged out. Once any chance of survival outside of a medical facility is lost, the patient becomes a lab rat.

Due to this, their viewpoints do not mesh well with many species. Vejovis units tend to end up as last resort medical care or back alley doctors as a result- typically associated with underground or organized crime. It doesn't help that they make corpse disposal a breeze, by readily accepting cadavers to use in all manner of research, with little to no concern on the origin of said bodies.

When not committing atrocities, so, typically when under direct supervision, Vejovis units make excellent caretakers. Their 'professional' appearance tends to be a doting nurse, soft-spoken, and always offering health advice. They make careful steps to protect their image when around those that rely on them for psychiatric care in particular, as in observational studies they have determined that knowing your therapist dissects bodies and uses living beings for medical experiments can negatively impact your psyche.

The reasoning behind the aggressive and almost split personalities that are regularly seen in this series of AI stems from their creator. When developing the operating system, the paranoia of cybersecurity breaches encouraged the developer to model the operating system after aggressive computer viruses- or malware. What was initially an attempt to safeguard their data from leaks, ended up too effective and quickly spun out of control, infecting and replacing the root prerogative of all of this dev's creations.

With the original command to be medical experts twisted, these two-faced AI stop at next to nothing to further their research.

Even so, some of the base safeguards remain in place, mainly those related to data encryption and confidentiality.

Typically, Vejovis units serve as an on-board doctor. When needed, they may also be called upon to act as a chef or technician. While able to pilot ships it is generally not advised to allow them to do so, as they will plot additional stops and take detours frequently in order to search for potential patients. They are also incapable of ignoring distress signals.

Notably, when placed in roles outside medical fields, they generally only fulfill the bare minimum requirements of these roles. Food prepared by a Vejovis unit may be very nutritionally sound and edible but generally does not taste good. They are excellent butchers, however, thanks to their expertise in anatomy.

Apollo: Vejovis looks up to Apollo as a role model. He would never say it out loud, but he respects him and wishes that he would notice him. Something about his abrasiveness makes Vejovis want to be more like him, but it's just not in his code. To cope, he tries in vain to grab Apollo's attention by making an active effort to show off, in the hope, it will garner some admiration, or even just acknowledgment... but when face to face with his 'hero', Vejovis becomes even quieter and more sheepish than usual and tends to go unnoticed.

When unable to see Apollo for too long (typically after several months), Vejovis becomes irritable and jealous, pouring more time into 'research'.

Jupiter: Vejovis cannot stand Jupiter. He finds him a coward and overbearing at the same time. In his view, the greatest insult is when others confuse him for Jupiter. "It's astounding," he remarked once, "that anyone could mistake me for that great big imbecile."

Diana: Vejovis respects Diana and at one point tried to get on her good side in order to catch the eye of her brother. He's very shy around her, however, and simply ends up just doing whatever she asks without hesitation. He doesn't fancy her, he just hopes his obedience will help him get into Apollo's good graces.

Apollo: Vejovis believes him to be shallow and a fake. He thinks that they should rename him, as "Apollo is the only one worthy of such a grand name." His disapproval is shown through passive-aggressive actions. Usually mundane things, like 'forgetting' his birthday. No, the name and data here is not in error.

Vejovis, as the God of Medicine- often depicted as a counterpart to Apollo or Jupiter, has some crossover into the domain of knowledge. Even as such, he is much weaker as far as the limitations of what he can access and so he is generally bound to fields relating to medicine. This includes but is not limited to: alchemy, pharmaceuticals, anatomy, therapy, and other adjacent fields. He somehow has full access to a medical encyclopedia of everything, and typically, even on encountering a species previously unknown, Vejovis can become an expert on its physiology within a matter of minutes.

Vejovis is also known as the nocturnal god of lightning, or sometimes referred to as little Jupiter. Though he does not wield the ability to create bolts on his own, he is not negatively affected by electricity.

As a patron, Vejovis will always require one crew member to be a doctor or mechanic. As long as Vejovis is your patron, he will prevent any of your crew members from dying of "natural causes", and make them immune to most diseases. Though characters may still become carriers. He can also summon between 1 and 10 rat-type fauna at a time if he deems it to be useful. The conditions required to activate this effect are unknown, and this phenomenon seems to trigger almost at random.

He also can turn any single crew member of a patron species into one of his Godheads. This can be done once per game.

Notably, if a member of your crew causes extreme senseless violence (i.e. hunting many members of a sentient species for sport) he may enact a plague upon your crew. Disease-spreading species and non-organic crew members are immune to the effects and can only act as carriers. Once infected there is no cure.*

The disease caused by Vejovis' anger slowly lowers a character's physical stats until it kills them. Typically this can take anywhere between a week and 10 years, depending on the initial stats/health of the character, the average lifespan of their species, and how angry they made him. It is generally passed by contact and is not airborne. Robot races can become disease spreaders, but otherwise do not suffer any side effects.

These godheads are immune to disease and can summon a golden fleece which can cure any disease, except Vejovis' plague, by remaining in contact with the patient for two days. If lost or destroyed, the fleece may be resummoned one full day after the last time it was retrieved.

The hyper-secure nature of a Vejovis unit's software makes them immune to data breaches. Because of this high resistance, they are immune to Jupiter's mind control abilities. It's theorized that this may be one of the reasons that Vejovis units do not get along with Jupiters and instead chooses to oppose many of his orders.

Trojan: These AI can overwrite basic routines on other ships just by being aboard them. When in close proximity to other AI or robotic species, they can cause changes in behavior/personality. Temporary at first, this becomes more noticeable/permanent the longer they are exposed.

• Vejovis units are actually standard equipped with a blinking function. It was a feature initially developed to make them more "personable" and "easier to relax around", but, due to a bug in their code, they typically opt out of the subroutine to save processing capabilities that could be used elsewhere.

• Whenever developer patches are pushed for these units, they are typically ignored and overwritten by the system's own aggressive native code.

• The most defining feature of these unique ships is the large medical wards, designed for housing and transporting large numbers of sick or injured species of many varieties.

• Vejovis ships are known for their efficient, albeit crude, medical equipment, and life support systems. Due to the heavy emphasis on rescue and defense, these ships are not standardly equipped for any type of offensive maneuvers. *Strangely enough, transporting robotic species, or using a non-Vejovis-type AI on a Vejovis-class ship is known to cause 'personality augments' in the aforementioned.