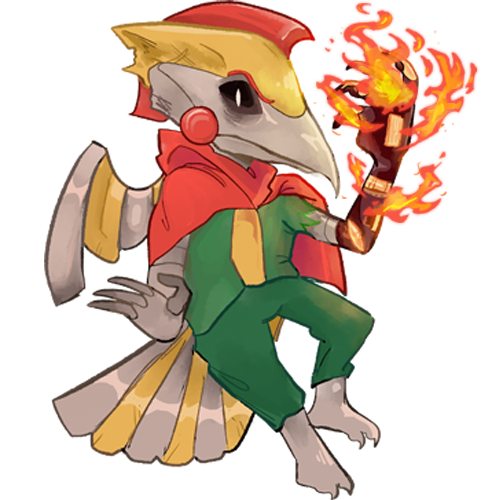 “Unstoppable, determined to make your life hell, that is this Athena unit.” — General K-L

Job: Mercenary
Likes: Warfare, Order, Nike, Combat, Spears, Destruction, Fear
Dislikes: Athena v1, Chaos, Disorder, Clients, Hephaestus, Vulcan, Eris, Debates over the meaning of single words
Notable contributions: War veteran of many wars, all of the wars she can take part in, no matter which side.

V7 appears similar to a v1 Athena unit at first glance, until one notices the minor differences, mainly in the legs, arm, head, and singular wing. V7 has a sleeker and more curved beak than a normal Athena unit, with a more jagged and further back crown. Along this crown many scuff marks and deep scratches may be found, as a sign of the many battles v7 has been through. In addition, v7 has only a single wing, and as well as a customized left arm, due to having lost both an arm and a wing in a fight that was in fact in reality a trap. V7 refuses to replace her broken wing, but willingly replaced her arm with a much more dangerous model customized to hold a single ai unit to act as a secondary power source. While v7 wears the typical garb of an Athena unit, she has made one addition: a cloak used to conceal her left arm when not in battle.

V7 behaves similarly to any other Athena unit: calm, collect, and rational. However there is one major difference, v7 has an obsession with battle, going so far as to occasionally taunt and incite fights with others nearby. To satiate this obsession with battle, v7 has made a name for herself as "The War Athena" entering any and every conflict she comes across while traveling. Anything from a bar brawl to a civil war, v7 will fight in each and every one, especially if the battles are to the death.

While v7 is battle hungry, she does try to keep an air of rational thought about her when she can. An Athena must keep up appearances whenever possible.

Athena v7 was created for the same purpose as other Athena units, to guard a large, valuable, home of an important "official" on the planet Doulea. Unfortunately for this "official" v7 was not prepared to take any form of abuse, verbal or physical, and quickly made mincemeat of her client. Upon this event the officials "partners" quickly set a bounty for v7, to which v7 responded in kind with a bounty of her own, though there was no money and the only reward was the death of these partners. Had it not been for the interjection of a contractor sent on the request of an anonymous client, v7 would have certainly been eventually killed. To this day v7 still does not know who this mysterious client is, but has vowed to one day discover their identity.

After this brush with fate, v7 set off on a quest to test the limits of her ability, taking part in every major conflict she could find. At one point, she was hired to act as a front line combatant in a conflict between two shipping guilds, though this was revealed too late for v7 to be a trap. This trap resulted in the loss of v7's left wing and arm. Of course, this deceit could not go unpunished, and v7 swore an oath to destroy both shipping guilds as well as whoever specifically was responsible for the trap personally. For this purpose, v7 had a new arm crafted for herself to amplify her combat ability. This new arm allowed v7 to take on new and stronger opponents and, thanks to some customization, allowed her the ability to subjugate other ai. V7 uses this ability specifically to subjugate Vulcan and Hephaestus ai to gain fire based abilities, so long as their core is inserted into the arm.

V7's investigation into the mysterious client has taken her to many planets and furthered her ability tenfold in the time she has been searching. As of now, the results of this investigation points her in the direction of the war general Ares v1.

The current whereabouts of v7 are unknown, be advised that contact with v7 can and most likely will result in the demise of you, or someone you know.

Subjugation Talon: Thanks to the specially created left arm v7 is in possession of, she has learned the ways of ai subjugation, allowing her to dominate the mind of lower generation ai. While this ability would normally disgust v7, she has sworn to use it specifically on Hephaestus and Vulcan ai only.

• V7 believes that Athena V1 is too soft for their own good, and desires to prove herself in combat against V1 at some point in time. Though she will admit that V1's ability is nothing to scoff at.

• V7 despises relying on her "feral mode" ability, finding it to be a sign of weakness and lack of skill. V7 chooses instead to rely on her own ability, but will begrudgingly activate "feral mode" if the situation calls for it.

• V7 once entered into a discussion over the definition of a single word that resulted in the violent death of every being within twenty feet of the discussion. It is recommended to never use the word "Filigree" around v7.