The Land of Science and Madness 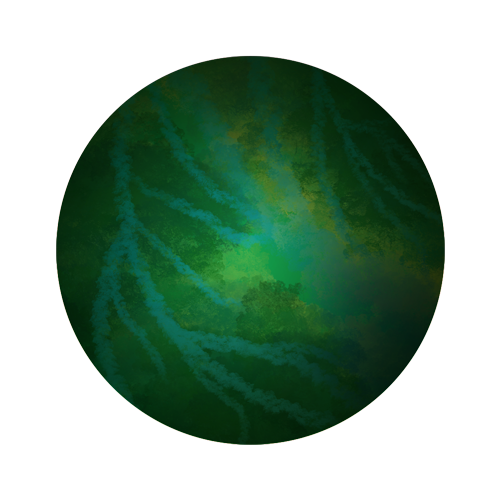 “Visit Oerson! Live in Oerson! Have your life changed forever in Oerson!” — Oerson Board of Tourism

A small blue/green/violet tropical planet covered in rain forests and taken to an almost omnipresent state pleasantly warm daylight due to the particulars of its orbit and rotation. Like many tropics, however, it is prone to weather changes that seems almost out of touch with reality itself. One second it's a pleasant sunny day, then the next, a rainstorm shattering down as though the spiteful blows of an angry god, and then the next, it's calm again.

The planet, is as said, mostly covered in tropical jungles, most not quite dense enough to block out the sun. It is broken up by a handful of plains and clearings, most of which have been claimed by urban development, or destroyed by mad science. The surface is mostly land, with what passes for ocean on the planet, amounting to a series of large rives snaking between the two polar regions, making the planet resemble a melon from space.

The poles are the most noted departure from the norm on the planet. The South pole, is nothing so much as a large lake, distinctly colder than the rest of the planet, but hardly what one would call 'arctic'. The North pole on the other hand, is a mountainous frozen wasteland, covered in a vibrant blue stone, ice, and infested with similarly blue skinned giants.

As the home world of the vaeri, it bears the marks of their inhabitance; much of the land is covered in vast, yet open, urban megalopolises, teeming with scientific and pseudo-scientific institutes, and both functional and tasteful glass domes. Outside these cities the land is marked with the evidence of strange science, with ruined 'secret' labs, forever blighted plains, strange craters, none of which are as abandoned as one would like.

The planet has seven moons, three of which were blown up at some point and became rings of multi-colored rock around the planet. Of the remaining four, three are largely mined out hulks of pretty rock, and the fourth, the largest, is controlled by a bunch of weirdos who hate their kin.

Prior to the vaeri, Oerson was idyllic, if rather out of touch with reality, as most creatures were less than predatory, most creatures lived peacefully alongside each-other. Then the vaeri came and screwed up the place real good, it would be some centuries before the coming of the "Great Unifier", Ugeniux, forced the psychotic weirdos to get their act together and not completely destroy their planet, this period was known as "The Age of Dark Science".

Afterwards things became relatively quiet, by vaeri standards, with the most notable thing to come after being "The Great Moon Crusade" where vaeri, who had fled to the moon during the troubled times before the Unification, invaded the planet. Many lives were lost, many horrors were created, and in the end, no one really 'won' and the two populations exist in a tense state of cold war, not that the Oersonian population seems to care or notice, it's rather one sided actually.

Iconix: The Capital and largest city on the planet, Iconix is a gleaming metropolis filled with wonders and monuments to scientific achievements. Some of the universe's most esteemed scientific institutions are located here, as well the least, and some of the strangest, and most specific. The skyline is dominated by a tower known simply as 'Capital Spire' where the High Adjuntive rules the city, and nominally, the planet. As the capital, the Iconix is the most strictly regulated arbitrated city on Oerson, they won't tolerate any of the weirdness that flies on most parts of the planet.

Siconia: The first moon of the planet, a large rocky sphere with limited Oersophorming giving it thin atmosphere, forcing the inhabitants into bio-dome cities. Ages ago, the satellite was colonized by a group of refugees from the planet below who were tired of the madness that seemed poised to destroy their kin. Today, after the disaster of 'The Great Moon Crusade' The locals have become insular and isolationists, only begrudgingly allowing outsiders for the purpose of trade.

Mt. Azuria: The largest mountain in the planet, located in the north pole. A massive snow and ice covered mound in the north, it is 'ruled' by a race of blue giants, and is rumored to contain legendary treasures of the forgotten age of Dark Science. Some even hold that the crystals in the region have strange properties. Nobody knows, because the giants kill anyone who tries to get there.

Giants of the North: In the planet's north polar region are a race of blue skinned giants known as the azur-gigas, enormous cyclopean beasts that seem more akin to ambulatory mountains than living creatures, coated in ice and with skin indistinguishable form the blue stone of their home. Little is properly understood of these creatures, as they repel any and all attempts to get near them, let alone collect them. They may be related to the comparatively more common and benign azureclops, but this remains unconfirmed.

• Most of the planet's native creatures are considered endangered due to the presence of horrific and highly predatory abominations that have intruded into the formerly sedated natural ecosystem. This isn't considered that concerning, as due to the creature's incredibly accommodating need, they've been easily introduced on less hostile worlds.

• Most of the fauna on the planet is photosynthetic, and most of the rest are electrovore and/or symbiotic. This has allowed the planet's native fauna to spread to just about any environment.

• The photosynthetic animals on the planet are not plants. The Oerson board of tourism is very adamant about this.