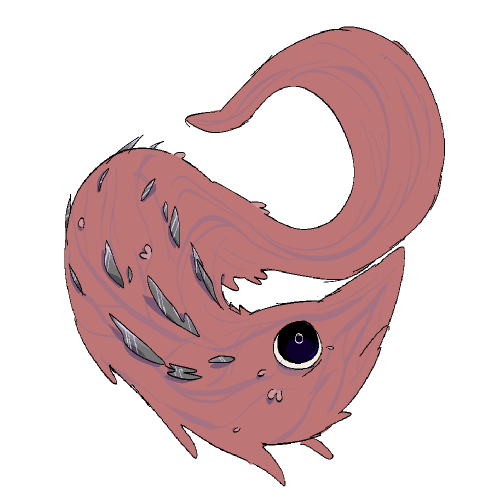 “Meat tasted spectacularly nostalgic but had an almost sickening texture, worse than most raw meat. May have been wriggling? 3/5 stars, rest of the meal was perfect.” — An unfortunate aftik

Attack Method: Leontophone hosts do not typically attack first, but if threatened, they will almost always aim to infect their foe or scratch with any metal parts they may have integrated.
Summary: Leontophones are small, delicious critters whose entire purpose in life is to be eaten, thus allowing them to infect a creature to become a host who produces more leontophones.

Though the most commonly-seen form of the leontophone is the 'prey' form, those infected will become a host, instead. The process of becoming a leontophone host is started by consuming part of any leontophone, but can vary in how soon it actually begins. In some cases, seemingly more often with other clockworks, the physical process begins almost immediately after infection. However, it is more common for the process to only begin once the infection seemingly 'detects' that there is enough nearby meat and metal.

At the beginning, hosts are usually found hiding with a hoard of supplies, due to seeking it out to consume later. Slime production begins very early in the process, giving the meat an unusual texture (and possibly contributing to the "unusually great" taste), and the host is able to integrate metal pieces just as early. The host will completely shed any feathers, fur, or scales they have, along with most horns, spikes, and claws, and usually loses their senses of hearing and smell, though the eyes almost always remain. If the host has a tail, it usually grows physically thicker and wider towards the middle but not much longer. Without a tail, the host will grow one similar to the one described.

At this point, the host will start producing leontophones. Eyes identical to the host's own will start growing on the tail, though in some cases the growing clockworks may 'miss', particularly if the host was originally exposed to the slime somewhere other than their insides. Each patch of flesh with an eye will normally then form a toothless mouth, and then separate from the host as a newly-formed leontophone. These may stay with their host to eat from them, or leave to seek out something that might try to eat them.

Small creatures, upon infection, start the process similarly, but are more likely to become something similar to this 'prey' form. Somewhat amorphous visually slug-like critters with two or more eyes and a long snout, usually integrating pieces of metal to form a sort of 'skeleton' to hold their shape. Transformed creatures are more likely to retain visual features of their original species, compared to the generic shape of prey leontophones. They may seek out more meat and metal to grow themselves into a full host, or they may be seen searching for predators similarly to prey leontophones.

Pieces of flesh split from a leontophone, whether host or prey, will grow into individual prey leontophones. Thus, with a large enough supply of meat, leontophones can reproduce very quickly. However, fire is the bane of clockworks, and the leontophone strain is no exception - all leontophones are extremely flammable, due to how much slime they produce. One well-placed flame can destroy an entire leontophone colony.

Prior to their final stage, most leontophone hosts, other than an overwhelming craving for meat and metal, act similarly to how they did in life. By the stage where their tail changes, most hosts lose any sapience they had, and none have kept their intelligence to the end of the conversion. In intelligent hosts, there are not many behavioral differences early on, further than wanting to hide away more and displaying some hoarding behavior. The leontophone strain, however, appears to be primarily adapted to non-sapient hosts - in infected fauna, the difference is more noticeable.

Host fauna will usually become more solitary, but, in contrast to sapient hosts, they usually also become more aggressive. Herbivores and insectivores will actively seek out prey or carcasses, entirely ignoring any food that isn't meat. They may attack others of their species, even mates or offspring, spreading the infection as much as possible, before eventually retreating to a safe, sheltered area.

Though prey leontophones will consume parts of their host and occasionally parts of each other, a host will never intentionally harm their leontophones. Even in the very few cases where a sapient host has retained intelligence up to the point where the prey leontophones began to grow and detach, they became reluctant to do anything that might damage the leontophones specifically. Some hosts, when directly threatened, may attack the opponent, or they may do the same as their offspring and attempt to 'convince' the other creature to eat them. This usually depends on whether the attacker is larger or smaller than the host. Some have also been seen to simply do nothing, just sitting and staring at the attacker. All leontophones fear flames, being the only thing they will always try to avoid, but even formerly-fast hosts are far from agile, and thus may be unable to do anything if threatened with the element.

Leontophones are, overall, not especially intelligent, even for clockworks. Many have only sight and some taste left, and can be easily tricked by things such as cardboard cutouts or statues. If the leontophone host is smaller than the 'predator' and believes that it can infect this new creature, it usually displays the usual behavior of a leontophone, trying to convince something else to eat it - this involves expelling any metal it has integrated to make it seem more appetizing to the 'predator'.

Overall, leontophones are surprisingly docile, though very interested in infecting through any means possible. It should also be noted that some hosts from the beginning gain more meat for their offspring primarily through hunting other creatures, and some may also switch between just focusing on spreading their infection and actively hunting depending on how much meat is available to them.

Prey: Prey leontophones are the most commonly-seen type, and the kind most commonly called simply a 'leontophone'. Small, mildly amorphous critters with two functional eyes and a long snout, these creatures actively search for predators. Their aim is to be eaten, and thus to create a host that will produce more of them, though some have been seen to simply try to merge into possible hosts, infecting them that way. Small creatures that have been infected by leontophone slime also commonly become something similar to prey leontophones. Most prey leontophones are just barely small enough to be held in a notail hand, but sizes can vary, especially if they have a large enough source of (dead) meat.

Pard: Prey leontophones who had a large enough source of dead meat. These are large and more protective of their offspring than host leontophones, and tend to be outright aggressive and preying on other creatures. Pards are uncommon, many prey leontophones with sufficient food supplies preferring to split into two smaller leontophones.

Delicious: Leontophones from a host, or that are a host, are described as tasting similar to their original species, "but somehow ridiculously delicious", although many describe the texture as off-putting. Pards, unusually, do not share this deliciousness, and cooking apparently makes the meat taste simply mediocre again. It should go without saying that eating leontophones, regardless of their supposed deliciousness, is a bad idea.

• Many consider prey leontophones to be 'cute', though it should not have to be explained how illegal keeping them as pets is and why.

• Despite the stories, sprinking leontophone ashes on meat will not kill any clockwork who eats it. However, depending on the situation, feeding a clockwork a living piece of leontophone flesh can help to make it more easily manageable.

• Leontophones do not seem to recognise robots as viable hosts, simply as sources of metal, but there have been some cases of prey leontophones holding onto and trying to merge with robots that are visually similar to real creatures. 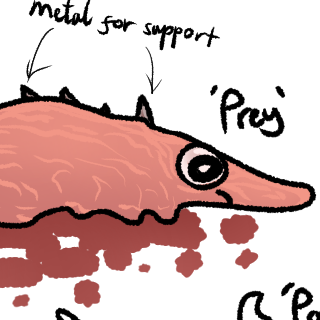 -Back to Clockwork Menu-
< Chimera
Manticore >