Valley of the dolls 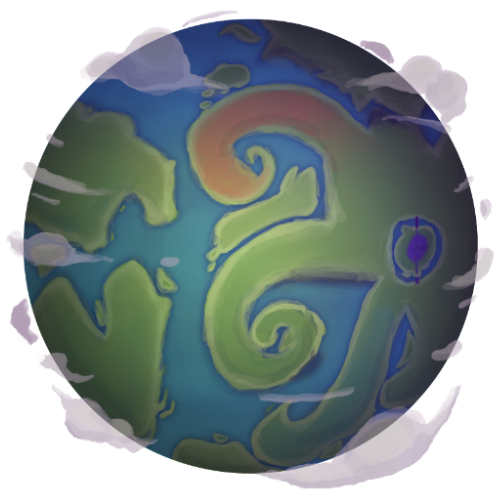 “It's my home! It may be scary at times but it's home!” — Lyriix Katzpaw

Nukotii is a vibrant planet teeming with life both on land and in its oceans. The fauna and flora often blur the line between marine and terrestrial life.

An example of this is the various algae species that grow both on the surface of the water and on land, An overabundance of these in an area can lead to it creating a "death bloom". These dead zones are areas that most living creatures cannot survive in due to the algae using up the oxygen and creating a waste product that is toxic to most lifeforms except for the algae itself. Though the toxin is only lethal when dead zones are created. The growth of these plants is managed by massive creatures known as walkwhales, which migrate to mainly feast on the rapid growths. Also, the planet's government routinely clears out the algae near cities.

Most cities and towns on Nukotii are located between small valleys to protect from the various fauna. Above these valley cities are usually the long webbing of squibbins between the mountains, these heavily discourage predators such as screegulls from swooping down and attacking those who live there. This also means ships cannot fly too low above the cities or land from directly above them. This is remedied by landing areas located on the outskirts of these cities.

The streets of a city are often quiet and the shops are manned by automated machines due to the shy nature of the illusorii residents.

Larger cities may extend up and sometimes into the mountains that make the valley. Most regardless of size will have underground train stations that connect with other cities' railways making a network for one to travel from one place to the other safely. There are also alternative tunnels meant for traveling on foot.

The wilder areas of the planet consist of various biomes such as swamplands, fields, forests, and coastal regions. These are dangerous to travel through due to the predators that live in these areas. though it is not uncommon to encounter those who choose to research these animals and their facilities.

The earliest records of Nukotii go back to the medieval era of illusorii civilization. Most writings around this time revolved around the hardships of illusorii around that era as well as their leaders and the animals that roamed the planet. However, later records had many references and tales of illusorii going mad and obsessing over unknown entities before winding up missing or turning into ugly truths.

One recovered book has a page with a short passage heeding a warning.

"High above the ground
Murmuring soothing sound
It acquired choirs of young and old
Their minds to it were sold
I implore all who listen
Your pace must quicken
Before you start to hum along
To the truthseeker's song."

Around the time notails had arrived on the planet was when this warning and others like it were spread quite prevalent. This was due to the presence of creatures dubbed truthseekers on its surface. These creatures had a strange ability to drive people mad and had been influencing the minds of illusorii, using them as servants.

The notails had struck a deal with the illusorii to help with the truthseeker problem in exchange for the planet's resources. The first few encounters with the beasts had a few notails falling to hoards of ugly truths and the still sapient sought-after, who consisted of unturned illusorii who had been affected by the truthseeker and later other aliens such as the notails.

After that AIs were mostly deployed to take down the truthseekers as they were unaffected by their psychic abilities. Though it was still a struggle due to the AI getting overwhelmed and dismantled by the sheer amount of ugly truths and sought-afters protecting the truthseekers

Ultimately most of the truthseekers had been killed and the remaining few had hidden away from the surface. Most illusorii today prefer to forget about truthseekers. The tales regarding them serve to scare illusorii children into not straying too far away.

After the war against truthseekers had been won, the notails remained on the planet. most illusorii regarded them with wary respect and fear. Some disagreed with how they treated the captured sought-afters, who still remembered their past lives and their loved ones but were plagued by extreme paranoia and desire to be returned to the truthseeker.

Regardless of the pleas of various illusorii families, most sought-afters were not returned to their homes and instead kept in facilities to be researched or disposed of if deemed necessary.

The illusorii under the notail's rule had experienced many technological advances, such as space travel, AI, and vending machines. The illusorii quickly learned how to fix and construct such tech and improved on their past creations such as their railways and trains. They also would use this to make automated shops that are quite prevalent across Nukotii's cities to this day.

In modern times the influence of notails and the amount of them living on Nukotii had lessened over time, most who stayed were there to research fauna and adapt some into capture creatures. This has led to raising and training them to be quite popular on the planet due to illusorii being fond of animals. Having an annual capture creature tournament in the city Elksys. There are also the less popular capture creature contests that have pets and their owners dress up and act on stage.

Nukotii has also gained a reputation as a vacation spot for those who wish to see its vast ecosystems, the culture of art and self-expression, and the annual capture creature tournaments.

Cithara: Nukotii's capital was built in the middle of the very valley the first illusorii emerged from. It is an epicenter of art and music. There are numerous murals on buildings painted by various artists from all walks of life and the largest theater on the planet.

Eklsys: A sister city to Cithara, Eklsys is built on land surrounded by a massive river. The city itself has many neon signs and has a large culture of rowdy nightlife and parties. It also contains a larger populous of bloodmyst illusorii.

Lowvetti Desert: A large desert with many high cliffs and ravines. It is known for its reddish-pink sand and as an area where many animals choose to brood, making it a popular site for those who wish to observe creatures through various stages of life.

Truthseeker Lairs: These are hidden caves found deep underground, through secret entrances leading to the surface. They house the elusive truthseekers and their victims. Areas near the lairs are unsettlingly quiet and peaceful. Those who stay for too long around these places will start to hear lullabies in their heads and have feelings of homesickness towards places they have never been. If one should experience these symptoms, they should leave immediately.

• Art, fashion, and music are very prominent on Nukotii. It is not uncommon to see aspiring artists, musicians, and designers rent studios there due to the number of specialty stores on the planet.

• Musicals and broadway shows are popular on Nukotii and often talked about amongst those who live there. One of the most popular musicals on the planet is about a young illusorii dealing with three people with the same name in a cliche bullying them.

• There are many bright and colorful mascots and characters seen on signs and products sold on Nukotii. There is even a mascot for their train systems named "Tamaii" who is a squibbin wearing a conductor's hat, her hat color is different depending on which city's train station.