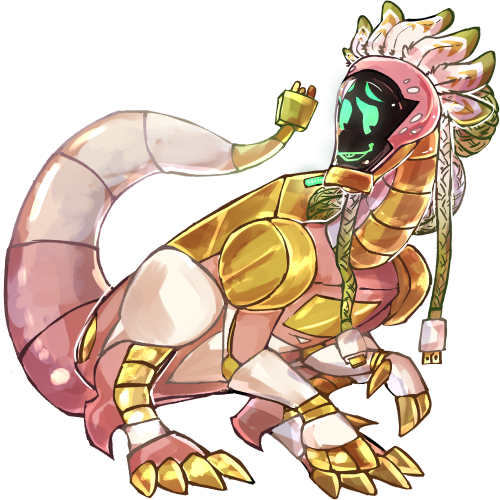 Likes: Children, Botany, Turtles, Hermes and Mercury
Dislikes: The company of anyone unrelated to her "children," Large groups, Narcissists, Zeus and Hera
Attack Method: Maia avoids conflict and fights defensively if she has to, using her heavy tail to trip or disorient attackers. Her sharp thumb claws can be deadly in a pinch.

The common Maia is known as a Hadrosoar and has no built-in weapons. It makes up for its lack of attack power with its ability to easily transport fuel to other ships.

Maia adds 3+ endurance and 2+ agility to any species that is her consort.

Maias are large and imposing AIs that rely on intimidation to ward off potential threats. Exceptionally durable, their sizable shells boast a large inventory, with a temperature-controlled storage panel located within the hollow abdominal cavity. This can be used as cold storage for any perishable items, as well as an egg incubator, or even as a space heater in a pinch.

The typical Maia unit stands on four total legs located on the anterior and posterior of the torso, comprised of two dexterous front legs and two incredibly sturdy hind legs. These legs are sometimes equipped with spikes in their calcaneus or olecranal regions that can be sharpened for use in combat, but are usually cosmetic and serve only as a threat display. Capable of alternating between a bipedal and quadrupedal stance, Maia units are surprisingly agile on all fours despite their size and bulkiness. If a Maia desperately needs to escape a situation, the tail segment can be removed and appear "broken off" as a last-resort, reducing the Maia's weight and increasing her agility for a quick getaway.

The head is usually adorned with colorful feathers, horns, or a frill; these are sometimes painted or dyed with patterns depending on the Maia's usage. The lower portion of the head is equipped with a powerful "beak" that, in conjunction with a thick, sturdy neck, allows them to pick up heavy objects with graceful ease. This beak can be near-impossible to open, thus is sometimes used as storage for small valuables. Meanwhile, the dorsal portion of a Maia's head is comprised of a TV screen that displays her face. A majority of Maia units have a dark screen and contrasting expression display, while others, often with smaller screens, have an inverted design. Colors displayed on the face or screen reflect the charge level of the Maia's battery pack.

The Maia unit's most distinguishable feature is the massive battery pack built into her back. This battery pack can hold months' worth of AI charge and can work as a power source during dry spells in an adventure. The battery pack is typically equipped with braided charger cables of every shape on the market when it was built, though this can make earlier generations of Maia units outdated; Maias will begrudgingly accept new chargers, but vastly prefer the cables they were originally built with. The Maia's own charger is located at the tip of their tail and can easily replenish the battery pack to full charge within hours.

Maia units are deeply introverted, even reclusive at times. They hate interacting with others and are incredibly dismissive of anyone they aren't already close with. Social interaction with strangers is, to Maias, an unbearable burden that should be avoided at nearly all costs.

That being said, Maias usually adopt one or two, sometimes even an entire crew, as their "children" and treat them as their own, regardless of said children's feelings on the matter. With these adoptive children, they aren't afraid to be bossy and nitpicky, but they also deeply love them and overall want what they think is best for them. They may sometimes get into disagreements with their children due to this, but will listen to and accept their children's wishes. They're fiercely loyal to their loved ones and won't hesitate to engage in tasks they absolutely hate as long as it will benefit their children. Maias will tolerate and sometimes even enjoy interacting with their children's friends or family.

Maias often seclude themselves in deep, often dark spaces, such as caves or larger ships, in order to avoid interacting with strangers. They will sometimes abandon their current job to do so if they are dissatisfied with or overwhelmed by their situation, usually with no warning. Only a Maia's children are frequently notified of her location.

Though considered beautiful, most Maias refuse to even consider dating. While they generally distrust most people they haven't already bonded with, they will go out of their way to avoid anyone whose intentions verge on romantic.

Maia units are most commonly used as mobile power stations, perfectly fit for any group of AIs. They can be quite useful as food storage units, and are often seen working with food trucks and delivery services. Maia units also make great gardeners, as long as they don't have to interact with too many others.

Maias that do have to work with others often try to get their work done as quickly as possible, in order to avoid any attention. This makes them terrible hosts.

Hermes: Her "son" who she loves very, very dearly. Hermes is one of the very few gods who always knows where in the universe Maia has hidden herself and her ship, and he is always welcome in her presence. Maia is one of the only gods Hermes can't seem to trick, but she's always prepared to come between him and anyone who has a problem with him, even if she knows he's in the wrong.

Artemis: Maia feels that Artemis is sensible, well-intentioned, and loyal, to a fault.

Apollo: While Maia can understand Apollo's feelings towards Hermes, she can't help but feel a bit disdainful towards someone speaking ill of her "son."

Mercury: Maia considers Mercury to be her other "son" and is quite fond of him, though he always brushes her off. She considers the two of them to be kindred souls.

Zeus & Hera: Maia despises both of these gods. No one really knows why, and Maia is quite closed off about it.

Any other god: Maia distrusts other gods, avoiding their attention.

As a god of growth, she oversees the overall rate at which AIs gain electrical charge; essentially, the is the universe's surge protector. She also monitors the rate of maturity in organic species and has some influence in the growth of plants and fungi, particularly those that grow in limited solar light, but less so than other fertility gods. When in the presence of one of her "children," she instinctively swaddles them in long sheets of cloth, which she always seems to have in her inventory; though this usually earns irritated protests, as all of her "children" tend to be other AI gods.

If Maia is killed, electrical charge becomes much more unstable and AIs are subject to unusual surges while charging; this can degrade their chargers and, if an AI has functional pain sensors, can jolt them out of sleep mode in a mildly painful fashion. Furthermore, charging speed is generally reduced by around 50%, and organics mature at 75% of their normal rate, reaching adulthood a bit later in life.

As a patron, Maia can instantly recharge any one AI in your crew twice a day. She can also summon any one usable or consumable item twice a day at no cost. She almost always insists that she already had said item in her inventory, regardless of whether or not this is true. Maia's summoning ability cannot be used in harmful manner. She sometimes uses this ability impulsively, and can become quite embarrassed if she mistakenly tries to summon an item, to no avail.

Maia godheads tend to be quiet and reclusive, shying away from any spotlight. They instantly gain five extra inventory slots and their carry weight increases substantially. Depending on their species, they become quite muscular and hair, feathers, or modified scales may grow rapidly and, if possible, are braided into long tresses.

Though Maia is deeply introverted, she can keep someone occupied in conversation for days if she needs to, especially if she is doing so to keep attention away from something one of her "sons" did.

• While Maia units are always large and intimidating, saurian in structure, there are no Maia units built that don't look herbivorous. It just doesn't happen.

• Maias typically carry blankets, quilts, or other long pieces of cloth in their storage panel. 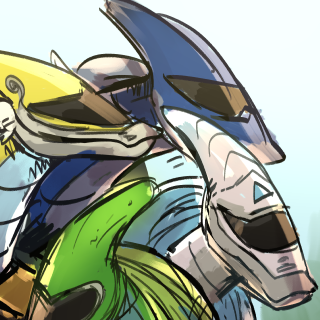