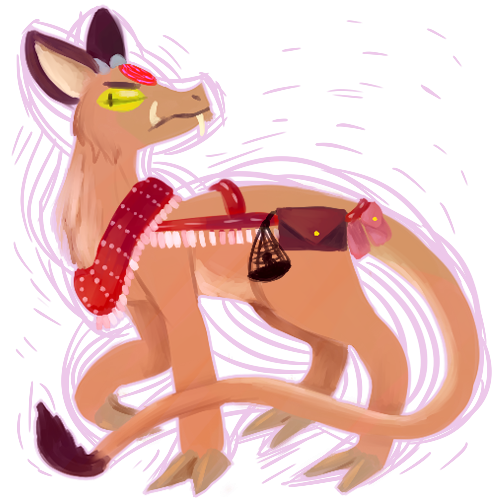 “I Speak Like This Because Every Word Is Important. Even, SomeTimes, Words WithIn Words Are Important.” — A typical inermi

Attack Method: Running away or attempting to gore attackers with the tusks. They often use their psychic powers to push their opponents off cliffs.

[Nomadic] Neutral trait
This character is very good at adapting to new environments, but can't stand not moving on. A bit restless by nature.
[Psychic Powers] Positive trait
This character has a general psychic power trait which means they may have one or more psychic powers. Due to this being a general trait, most characters with it have not mastered any powers but know more than one. If they have mastered any powers, they use that as their trait.
[Coward] Negative trait
This character will always try to back down from a fight, though they will still act in self-defense if they don't have a choice. If forced into dangerous situations, they will suffer morale loss, and will be more inclined than most to abandon their crewmates.

Inermi are a small species of antelope, adapted to living on cliffsides. They have small nubby horns, larges flexible ears and long unicorn-like tails they use for balance and expressing body language. They come in an array of natural earthy tones like tan, black or gray, and have three eyes. Two of the eyes are usually a bright natural color like yellow, red or blue with oblong cross shaped pupils, while their third eye is pupil-less and can be any color except black and is the source of their psychic power. The damage and destruction of this eye will likewise damage an inermi's psychic power. They have two sharp teeth towards the front of their mouth and further back they have two pairs of boar-like tusks, one pointing forward and one pointing up. More fashionable inermi often decorate these tusks, carving them into strange patterns.

Inermi lack hands or any sort of ability to hold or grasp objects without the use of their psychic powers.

Skittish and untrusting, inermi are the main prey animals of their homeland. Inermi always live in family groups of around 10-30 individuals that are constantly mobile, feeding on the thin grass and roots on the cliff sides where they live with their powerful tusks. The inermi are incredibly family oriented, with most groups consisting of a few mated pairs, their parents, and their children. Inermi children are able to walk and run a few hours after they are born, and expected to keep up with their families as they roam and feed. Yet because of the high mortality rate for inermi children due to predation, most inermi parents refrain from naming their child until it has reached a year of age.

Inermi children often pick their own names after their year is up and are able to change them throughout their life. After all, in a world where any misstep could lead to the jaws of a predator, nobody much cares what you're called, as long as you respond to it.

Inermi are very distrusting of newcomers, and usually shun them until they are absolutely sure they are safe, after that, they are loyal if flighty friends. On the inermi homeworld, attempting to protect a friend very rarely ended in either of you surviving, so inermi might seem cowardly to some, willing to abandon fellows at the first sight of dange, but to the inermi if someone survives by running they can carry everyone on in their memories.

Memory plays a highly important part in inermi society, and they have a highly complicated writing system composed of telekinetically carving grooves onto pieces of thick woody paper. Most inermi carry many "books" worth of these papers in specialized pouches around their necks. These papers can hold anything from poetry to lists of family trees or scientific observations about the Abyss. The most important of these books are often tied to the only animal to Inermi have domesticated; a type of small migrating bird called the picreole. These pigeon like creatures can find their way back to their nests without fail and are one of the few creatures that can travel vertically in the Abyss, making them ideal for the inermi's system of mail.

Inermi love writing letters, and often have pen pals with inermi who live at deeper depth. They are also used to coordinate trade with deeper depths through a system of pulleys. Most inermi carry a few picreoles around with them, some for mail, and always one that carries the inermi's will and last words. When an inermi see's deaths coming as inescapable, they will release the picreole containing their will where it can return to their family and they will be recorded dead. While spacefaring inermi do not usually carry picreoles, the tradition of always keeping one's will on them has persisted.

The only trait more important to the inermi than memory, is their psychic powers. Inermi are native to strange pits or Abyss' on their homeworld, strange bottomless realms that stretch immeasurably downwards from which greater and greater psychic power emerges. Inermi have evolved alongside this psychic power, and the deeper the subspecies of inermi lives in the Abyss, the more psychic power they have developed. Word has spread of abyssal level inermi being powerful enough to stop time itself in the deepest depths of the Abyss, but this is mere rumor. Inermi this powerful could never survive outside the outstanding psychic pressure that can only be found in the deeper levels of the Abyss, and they would die instantly if brought to the surface.

The only inermi found off homeworld or living on the surface of Cenotan are Upper Inermi, the weakest subspecies that lives near the very lip of the Abyss. However, all inermi, regardless of subspecies, put great stock in their psychic powers, as they are the backbone of inermi survival and society. Inermi children train their psychic powers diligently as they age, with several rituals and celebrations for children revolving around "focusing" their third eye in order to achieve full mastery. Strangely enough, inermi raised outside the Abyss will gradually lose control of their psychic powers over the course of a few generations, leading to a new generation of spacefaring inermi that require robotic prosthetics to compensate for their lack of both hands and psychic power. It is hypothesized that the Abyss is necessary for calibrating a young Inermi's third eye, and this theory has prevented much immigration away from Cenotan, despite its hostility.

Inermi speak in a formal and odd tone especially with strangers. They have an odd trait of Enunciating Certain Words in order to display their importance, a carryover from the inermi's own language. Their spacefaring cousins may speak more casually and are more prone to picking up the slang and habits of whatever species they most associate with but even they slip into an "inermi accent" occasionally.

Inermi history describes that, long ago, the inermi were a simple species of deer hunted by a species that to them were on the level of gods. They had terribly strange technologies that shot fire from the sky, caused continents to move, and could change the weather at will. The crown of their empire were 15 perfect cities, bastions of the light and technological glory of these gods.

They would ride into the great forests of Cenotan on vast hunts, chasing down inermi foolish enough to be found. They lorded over the world until one day a giant explosion rocked the world. The skies were filled with ash, the oceans boiled and time itself seemed to stop. For two weeks the entire planet seemed bent on destroying itself. When the smoke cleared the godlike species that the inermi feared for so long, vanished, and in the place of those 15 great cities there were instead holes, as wide as the cities had been and with no end in sight.

And they were calling to them.

Upper Inermi: The subspecies of inermi that lived the closest to the surface of the Abyss. Upper inermi are the only species to be found off Cenotan and are the standard for the species as whole. They are generally smaller than their deeper born cousins and the only psychic powers they possess is a rudimentary telekinesis. They run the upper side of the inermi's mail system, and provide the backbone of the inermi economy by trading relics from the Abyss with visiting aliens, leading to a resulting boom in upper inermi's culture and wealth. They often serve as guides to misguided research attempts into the nature of the Abyss's.

Depths Inermi: Depths inermi are categorized as any subspecies of inermi that live at depths of the Abyss too intense for upper inermi to bare. They have notably longer tusks, brighter eyes, and darker coats and their psychic powers have much more diversity and strength than upper inermi. They run the lower end of the inermi mail system, and while they have never been seen by any visiting species, trade and communication with them is well established through the picreole mail system. They often send up strange and confusing technology from the Abyss for the upper inermi to sell, along with reports of vistas and creatures that should very well be impossible.

Abyssal Inermi: Abyssal inermi exist only in myths sent up by depths inermi. A few chance sightings, many which have been discredited, report massive black inermi having been sighted on the very edges of recorded territory. Rumors of their supposed power abound, that they can stop time, bring the dead back to life, that the exist at the level of gods. Indeed, many inermi believe that at the bottom of the Abyss lies God, and the closer any inermi lives to this God the more powerful they become. Despite many attempts, no abyssal inermi has ever been officially recorded or contacted and such they are officially regarded only as myths.

Third Eye: Though it has no visual purpose, the inermi's third eye acts as a conduit between them and the power of The Abyss. Through ritual and practice from a young age, every inermi can access some degree of psychic power from the Abysses wellspring. An improperly calibrated third eye can lead to problems in accessing such power, and the destruction of it can sever an inermi completely from the Abyss, a fate worse then death.

• Inermi born off homeworld will always be incredibly fashionable, even if they lack the ability to wear most clothes. Inermi love colorful things, and when given access to unlimited clothing, they will often go overboard.

• The Abysses on the inermi planet are filled with strange powerful technology found nowhere else yet they are completely useless without hands. Most cannot even be bypassed with the inermi's psychic power. The inermi have historically been known to burn and destroy priceless technological relics without blinking, viewing most technology that they cannot access as trash. 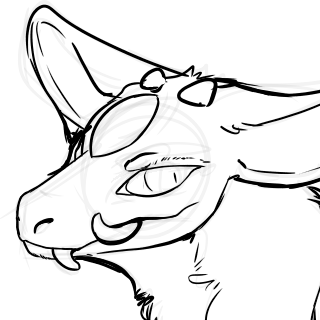