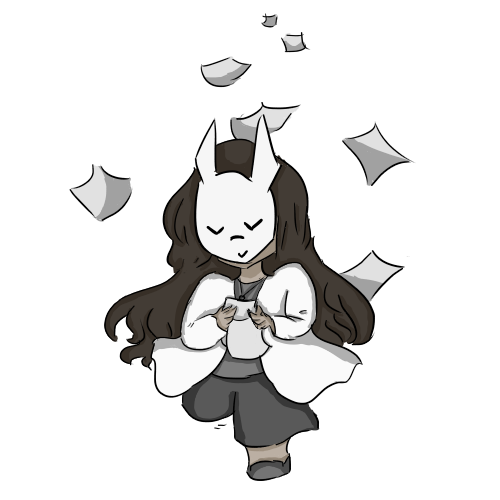 “Listen, there's a perfectly good reason why these strange creatures should be unable to fly. VvV” — K-9 moments before handing in a 100 paged report

Job: Notail Leader of the K-class
Likes: Finding new knowledge, Proving people wrong, Reading, Dogs
Dislikes: Being proven wrong, People who think they're better than them, People who don't listen to them
Notable contributions: K-9 is the current leader of all K-nowledge class notails.

K-9's appearance, unlike many of their eccentric pursuits, is rather plain. They wear a plain, canine like-mask. The 'eyes' on the mask are closed shut, with the mouth drawn in a small smile. Their antennas point ahead of them before leaning downwards on their face.

Like most of their species, their attire is simple and grey. They wear a grey long sleeved shirt, with their number 'K-9' inscribed on it. On occasion, they wear a white coat as well, but this is fair more rare. Their hair is grown longer than most and occasionally tied with a brown ponytail or whatever they have on hand. This sometimes leads to them having their hair tied with ivy, or a charger they weren't using.

They always have a pen hanging on a necklace around their neck, and a notebook in their inventory. They need to make sure they have a way to take notes, after all.

K-9, to most, may seem like a typical notail. They hold themselves in high regard- believing that their work, no matter how uncertain it may be, is done correctly. They constantly enjoy searching for knowledge. They're willing to spend hours outside investigating a single subject, even if the knowledge has been given to then in the form of a book. On occasion, they test out their information in various ways- trying to be absolutely certain if their knowledge is the truth.

They're rather happy to entertain any questions any species has, despite its ridiculousness. Any discussion is absolutely welcome, and thus, it isn't unheard of for a simple question to delve into a history lesson. However, their main flaw is that they believe anything they say is the truth. Adamant to stick to what they've learned, they absolutely detest anyone telling them they're wrong. They're certain, no matter what, their word is absolutely correct. Even the smallest subtle hint that they're doing something wrong sets them off in a rage.

A quiet rage, that is.

The moment someone tries to prove them wrong, they automatically search for a way to prove themselves correct, through arguing or through research. They may end up cancelling projects, important or not, to prove a point. This may take an hour to years for them to finish. They take the smallest plot thread and spin it into a full formed weave.

The moment they finish, they immediately find the person who said they were wrong and gives them a document proving themselves correct.

This gives great exasperation to those who work under or with them.

K-9 was born as a regular K-class notail, like others of their species. They went from planet to planet, all in the pursuit of knowledge. They were very diligent. They kept notes and notes on every single thing they saw themselves. They made sure their first effort was the best effort they could give. Until they were told one day, the information they brought back was incorrect.

K-9 scowled. They told them again and again, they were certain they had their facts in order. There was not a single lick of misinformation in the reports they gave. They were correct. They always were. They were told once again, no. The information they brought in was incorrect. They couldn't accept it, and politely told K-9 to go out and see for themselves.

K-9 was furious. They left again, seething, and went off once more.

They weren't seen by that person in weeks until K-9 came back with a thick paged document, all marked and highlighted. In it was an extensive description on how they were correct. Despite their knowledge that this fact was wrong, as they leafed through the document, they realized K-9 had somehow proven the falsehood true.

With a sigh, their report was reluctantly accepted.

K-9 went off in their normal routine until they accidentally came back with misinformation. Again and again, they proved anyone who claimed their information was wrong. After all, they had seen it with their own eyes! They couldn't be wrong, and they wouldn't. Every time this occurred, K-9 felt themselves growing tired and sick of the routine. They felt as if they were rarely believed. They knew more than anyone they couldn't keep this up forever. One day or another, they'd end up facing the Neo's cruel jaws. Any fact they've proven lost.

They wouldn't let that happen.

It was then they applied for a leadership position. Their eccentric reputation preceded them, and their application was accepted. They took on the tasks given to them, figuring out strange ways on how to pass them. Despite the difficulty they faced, they proved themselves once more and were handed the role of class leader.

As a class leader, K-9 is constantly cloned and replaced upon death, but only as long as they continue to outperform anyone else vying for their position.

Unconventional Means: K-9 is strangely good at making their way around facts that have been proven wrong true. They've somehow managed to make a way through strange means. This can lead to them somehow finding a way to make a fauna's feathers to be heavier than steel. Afterwards they bring in the fauna and a report to prove a point.

• K-9 has written several books on their reports. They're by no means famous for the knowledge provided, but their narrations are often said to be amusing to read through.

• K-9 holds an extensive personal library. Their shelves are often more filled with their old notebooks, rather than others' books, however.

• K-9's capture creature is a gwech. They seem to have an affection for these creatures, and pets one whenever possible.