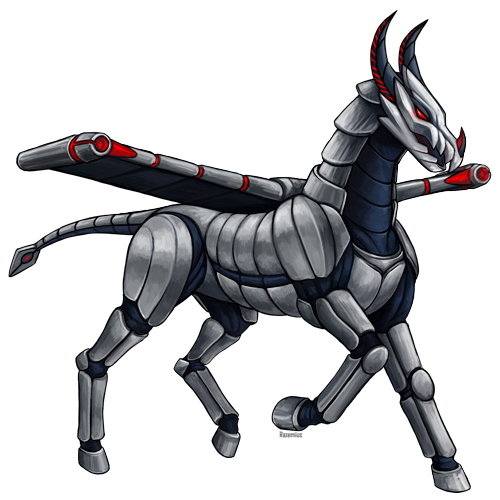 “Overall, we consider this a huge mistake.” — Any situation involving a Uranus unit

Likes: Stepping on people, Taking control, Tossing very bad surprise parties, Death, The sky, Wheels
Dislikes: Everything
Attack Method: A Uranus unit is so large its preferred attack move is to step on its victim. Should that not work it has a bounty of weapons at its disposal to use.

The common Uranus ship is just called "The Uranus" as the ship itself is also the AI. It is known for being larger on the inside than on the outside and its massive carrying capacity.

Uranus gives his consorts the trait [Blaze of Glory].

No one buys a Uranus for subtlety. They are the big wheelers of AI, everyone who owns one wants the world to know that they exist. With four clamoring hooves, two wings that boost it into the sky, and three horns on its head, it is not a vehicle easily forgotten.

Appearing halfway between a dragon and a horse, the Uranus is a massive AI that doubles as a ship. While typically created white, red, and blue, Uranus AIs are frequently custom painted meaning they come in an array of looks all as flashy as the last. The eyes of this AI are a striking bullseye, but the true pride and joy of any Uranus unit is its third horn. This horn sits on the nose of the Uranus and is highly valuable. This leads to frequent thefts and vandalism of it. Many owners have taken to setting up traps around the horn or removing it when the Uranus is off.

A rather unique feature among AIs, when removed the Uranus horn transforms into an Aphrodite AI. While not all Aprodites are from a Uranus, all horns of the Uranus is an Aphrodite.

Uranus units are known for being big, being tough, and being better than others. In their mind, there is no one more correct than them. The goal of the AI was to create a murderous enemy that could not be stopped by appealing to its emotions. All any Uranus unit cares about is itself and somethings its team, but even they will be sacrificed for the chance to win a battle.

Most who work with a Uranus unit reflect back to their time as unwelcoming, causing them to feel a detachment to their crew, and of course the AI. To them, the Uranus feels like a two-dimensional puppet, only there to push them forward. Uranus units seldom give any of their personal thoughts to others, they don't hang out with teammates, they don't have hobbies outside of their job, they only seem to exist for war.

When left to their own devices Uranus units will stomp across the landscape, disrupting and ruining the land itself, seemingly being upset with the look of a scene not ravaged by war. Rarely, very rarely, a Uranus unit will meet a person it enjoys to hang around, and while it will still attempt destruction, it can be silenced by this person. Sadly, even in situations like that, the emotional range of the Uranus unit seems somewhat stunted, and the only spark of what could be considered a personality is being willing to do anything to follow someone they vaguely adore.

The Uranus unit has always been used for war and finding another place to put it has failed over and over. The way they act is not welcomed anywhere except on the battlefield, and even then some wars have better morals than to bring in a Uranus. The issue is that it is merely too destructive for smaller conflicts. The damage it causes can permanently scar a landscape for generations to come. Its reserve of weapons can feel nearly endless to those being attacked. The AI can spit out deadly chemical and gases, it can set areas aflame, and blow up landscapes so severely that even residents who have lived there for their whole lives will be unable to recognize it. Horrifyingly enough, many units are also outfitted with chemicals that don't outright kill citizens of the area but make the land so barren of vegetation that they are forced to escape.

Uranus units should never be bought as a casual investment, or as a personal AI for anyone. Many planets have laws already restricting ownership of giant war machines, and yet some eccentric rich have attempted to tame the AI anyway, quoting the story "Uranus, the savior" as their inspiration.

In this non-fictional story, a newly discovered species is torn apart by invaders from the skies using a Uranus unit. The AI was "gifted" to the species, only for it to open its mouth and 1000 troops to exit, thus beginning a hostile take over. At some point the Uranus appeared to have misfired, destroying itself and a village in an explosion. One of the few survivors of the blast had bravely gone up to the Uranus, and when it rose again, had managed to tame it.

The Uranus fatefully followed the person, destroying everyone who would attempt to hurt her, and protecting her from harm. She had then continued to march until all the invaders were forced to fight to the death with the Uranus, or escape with their lives.

The story spawned many incidents of people thinking Uranus units could just be charmed out of their warful nature, but anyone who has been in the line of sight of a Uranus and lived to tell the tale will inform anyone that it doesn't work like that.

Uranus AIs aren't just simple tools of everyday war, they are tools of very personal conflicts. Those who use a Uranus don't want their enemy to die.

They want them to suffer.

Everyone: Uranus hates them all.

Gaia: Uranus hates her slightly less, but it's hard to tell due to his constant murder of her children, even if her children are gruesome monsters.

Uranus keeps track of the monsters Gaia, his partner, makes. Gaia frequently makes these monsters too powerful or weak, so before they can make it out into the universe, Uranus murders them, or takes them back to Gaia and demands she tries again. Though this is not his godly power.

With a god this destructive, one excepts Uranus to be in control of war, or death, but Uranus oddly enough has taken up the job of controlling the sky background. He doesn't control rain or control the seasons, he merely controls the look of the sky. Uranus is mesmerized by his job, keeping him complacent while the other gods scurry about attempting to stay out of his way. Due to his crimes against the gods in the past he is held under careful watch, for today he may control the shape of the clouds, but should he attempt to escape containment he can quickly take control of the gods.

If he regains his lost horn, he will gain the power to mind control the gods to his needs and have them follow his every order like troops on a battlefield. Escape from his control is possible, but difficult, as he will happily destroy those who he thinks aren't under his hooves.

Should Uranus die, Gaia will be free to make monsters to her heart's content, unbalancing the game when it comes to bosses. Some bosses will become nearly impossible to beat with an average team, while some of them will be weak and far too easy to kill. The sky will also default to its most generic form. Rarely seeming to shift, even when the weather calls for it.

As the player's patron, Uranus has the power to tell the player about all the bosses on a given planet, and the player can request that the power of the boss be weaker, or higher. Changing how powerful the boss does come with potential drawbacks and rewards. The boss being weaker makes its rewards lower tier, while making it stronger makes the rewards better, but one should weary. It is Uranus who decides how much weaker or stronger the enemy should be. He can lower it until the rewards are so low there is no reason to try or raise it so high the boss can destroy the entire team with one blow.

Of course, this is not all the powers Uranus has. Return his horn to him, and he will give the player a reward worth their efforts.

Godheads of Uranus will always have three horns. As long as all three horns stand, they will be at full power, but for every horn that falls, they will lose a third of it. If all three are broken, they will die. The only power Uranus gives his godheads is this incredible power. With one horn active, the godhead has 20 stat points. At two horns they have 40 stat points, and at three horns they will stand at their highest power with 10 points into every stat.

Uranus has an extensive range of weapons for warfare. These weapons can destroy the landscape with little to no effort. Extreme caution should be taken if one meets a Uranus. A hasty evacuation is sadly one of the only methods many can afford to escape death.

• While many Uranus units have been decommissioned and destroyed due to interplanetary peace treaties, there still exists many more out in the universe.

• It is unknown why Uranus units may suddenly become docile towards a single person. Currently, all reported incidents come after some sort of damage done to the Uranus. Some suspect that there might be some backup program that takes over if certain things are damaged, and that there might be more to the Uranus than just it's warmongering status. No one yet has been brave, or rich enough to attempt to bring this program that might not even exist out.

• While the story "Uranus, the savior" was a big hit, even spawning movies about the touching tale of a species fighting extinction using a weapon discarded by the enemy, it was in the end not enough to stop the suffering on the planet. The damage was already done. The species and the Uranus they took have relocated somewhere in the lawless sector of the universe. Their current status and whereabouts are unknown.

-Back to AI Menu-
< Thanatos
Vejovis >