Queen of the Urban Jungle / The Efficient 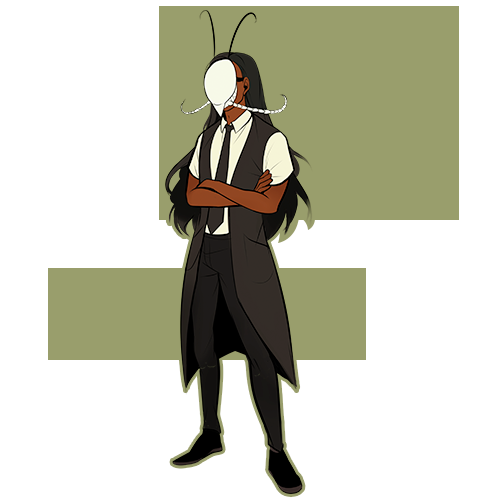 Job: Notail leader of the L-class
Likes: Urban wildlife, Efficiency, Having all the facts
Dislikes: Notails fixated on self-preservation, Tenants who keep pets in inappropriate housing, Relying on luck
Notable contributions: L-3453 is the current leader of all L-class notails, and occupies a senior position among the other notail class leaders.

At first glance, L-3453 could be mistaken for a fashion-forward individual from a lower-ranking class - while her wardrobe is quite extensive, it is all combinations of black outerwear such as suit jackets or lapelled longcoats, over crisp white collared shirts with a black tie. Even her mask is a regular notail white instead of the gaudy material other L-classes may use, though its centipede visage with lengthy moustache-like appendages is unique. She stands tall and straight, with dark skin and long, straight black hair.

In an unusual affectation, she often pins back her hair with a metallic barrette, and clips her antennae into it also. She claims she does so "to avoid distractions".

Oft-described as a "notail among notails", L-3453 is dedicated to supporting notails everywhere with habitats that maximize the work they can do for the notail cause. She has similarly high expectations of notails in other classes of work, such as B-classes creating genetically optimized workers, E-classes efficiently harvesting all available resources on new planets, and K-classes providing all the other classes with superior intel.

She detests inefficiency, opportunities lost to poor planning, or leaving things to chance, and were it not for her rigorous self-discipline would be liable to extend that viewpoint beyond her immediate spheres of control. In contrast with this worldview are the occasional bouts of erratic or eccentric behavior seen among L-classes, though she'll be quick to rectify any decisions made in this state if the results are unsatisfactory.

While she adheres to the core notail tenet of survival of the fittest through creation of the finest, L-3453 bears no ill will to natural-born notails who excel or earn leadership positions through competence. She does see their success as a failure on the part of B-classes - who should either perfect their breeding programs or acknowledge their works' irrelevance against the environmental forces exerted on individuals as they grow up.

L-3453 spent an infamously successful five years in the Woods, and didn't once look back when it was her time to leave. She found the whole exercise pointless, given her ultimate task would most certainly be to attend to the needs of city-dwellers, and dealt with the usual L-class threats of beasts and rivals by offering her services near-exclusively to V- and Z-classes. Their housing arrangements were far less particular than that of the fussier, indoorsey classes - the capture creatures even less so - and though they were happy to exchange shelter for lessons in animal handling, other tedious conversation with her tenants was pleasingly minimal.

She thus naturally gravitated back to managing quarters of Z-classes when she could first choose her own property, and found the sheer diversity of fauna her tenants would try to keep equal parts frustrating and inspiring. Frustrating, for so many wild creatures were clearly unsuited to urban living; and inspiring, at the tailmics and seizing birds and arises and everything else which found itself in the artificial environment notails had built, and not only survived but thrived. No sense of smug superiority in their survival, either - just finding a niche in what should've been a habitat optimized to serve notail needs alone, and making the most of it.

She applied for the position of L-3453 when the previous L-3453 lost their antennae in suspected self-mutilation, and has, barring the times she acts erratically, been a voice of reason and calculated decision among the notail leaders.

As the class leader, L-3453 is constantly cloned and replaced upon death, a privilege she is happy to give up if someone could demonstrate they were better-suited for the position than her.

Tattletailmics: L-3453 routinely inspects the work of her underlings, but knows deferential tenants may pretend all is well when speaking to a superior. She finds tailmics much more honest about the state of the building and any business conducted therein.

• One notable variation on L-3453's mask is a plain circular variety without any facial features other than the moustache. This is most commonly employed when touring notail outposts, making her the speculated source of various rumors of notail-like faceless monsters.

• L-3453 breeds and collects capture creatures as a hobby, with a sizeable collection of creatures stored in her personal quarters. She primarily breeds monochromatic fauna such as tailmics, handrosphinxes, and hybrids of the two, though training of her collection is outsourced to her former Z-class tenants. She also spends time monitoring populations of urban vermin.

• L-3453 will, when and only when her own work is done, look into the work of other notail classes and consider how best to optimise their output. Since an infamous but sparsely documented incident related to H-classes, these schemes and suggestions rarely leave the L-class' mind. 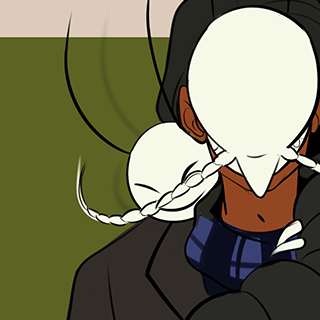