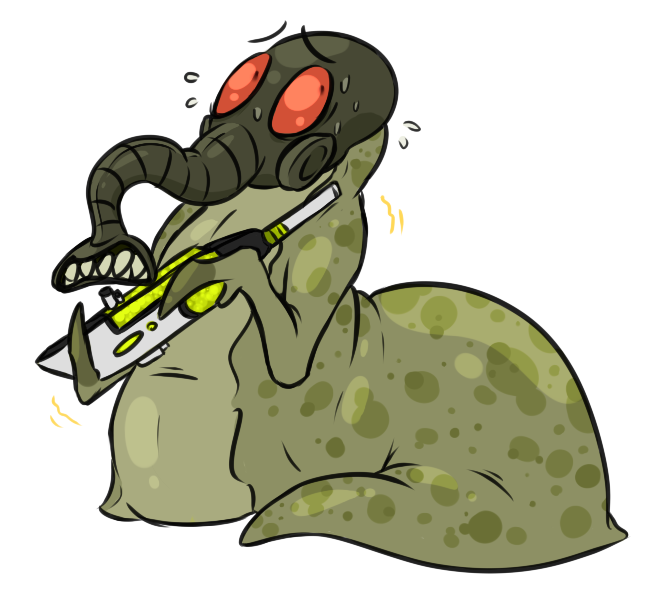 “Every weapon was fired in to the air. No risk was takens. Our nukes, our guns, even our rocks. Little did we know they'd all come crashing back down.” — Dwalk diplomat about the first time aliens attempted to greet them

Common Jobs: Politics, Diplomats, Clean up duty, Weapon builders, Salesmen
Likes: Being with their own kind, Safety
Dislikes: The thought of invasion, Warfare, Other aliens

Attack Method: Shoot everything they got the first second someone tries to attack.

Dwalks refuse to accept any god outside of their own and they refuse to tell anyone about their god.

Short and skinny. They have two claw-like arms and a slug-like torso which they use to slither on the ground. Dwalks can be any color ranging across the entire spectrum, although these colors are always a dull shade. Their faces look almost like gas masks, with two huge bug-eyes and a mouth sprouting from their lower head. The only difference between males and females without inspection would be spots on males and intricate stripes on females.

The entire species is xenophobic; they're scared of aliens. Very few are actually allowed on the home planet, although there are plenty of illegal landing sites on the planet. Thousands of years of contact has allowed them to open up a bit, but only a bit. This has lead to the creation of a space station for visitors around their planet.

Very timid, these creatures rarely speak up unless commanded to. Despite this, they are excellent negotiators, often acting as interplanetary diplomats. They are the only known sentient creature that can breathe their atmosphere safely.

The dwalks were one of the first space-faring races, although not the first. While others excitedly marched into the new frontier, the dwalks entered hesitantly, afraid of what might be out there. As such, it would not be a surprise that someone else made first contact. When the dwalks first met this species, they immediately fired every weapon they had on the planet. Little kids even fired pea shooters towards the skies. Unfortunately, this led to the near-eradication of the species. The dwalks then set up a large armada patrolling their planet, scared of any newcomers.

Through their fear, they amassed a large fleet of weapons. Anyone who came close was destroyed or at least driven off. Stories of a mighty war-mongering race spread throughout the galaxy. Eventually, a large group came to conquer the planet, afraid of war if they did nothing. The group broke through the armada and landed on the planet, where they proceeded to choke to death. The dwalks, frightened by the attack, prepared for war. Luckily for the galaxy, or at least the system, a diplomat from the dwalks negotiated a peace treaty without their knowledge. Inspired by this diplomat's example, everyone on the planet was taught diplomacy and negotiation, cementing their appearance as diplomats. Over time, more and more people were allowed on the planet as the dwalks got more used to newcomers, leading to the space station that is there today.

The home world of the dwalks is covered in dangerous swamps, only changing biomes to give way to vast oceans, cold harsh mountains and freezing tundra. Due to the strange formation of the planet, the atmosphere is mostly made of a strange orange gas, which is poisonous to all but the natives. As such, a space station was set outside so visitors may get ready for entrance beforehand.

The gas remains unidentified because no one has been able to bring a sample of it off-world and the natives, the dwalks, refuse to allow any equipment to be brought in that may help identify it. As a result of the strange gas, the plants grow as a blue-ish purple instead of green. The planet is divided into three main continents, each filled with swampy marshland, except for a small mountain range in the center, and the northern continent, which is too cold for swamps.

• The dwalks have helped planned the construction of many of the space stations in the universe. 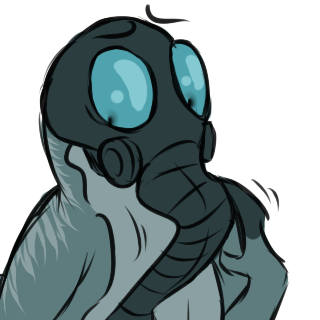 -Back to Species Menu-
< Dvmeret
Ecton >