“I'll be straight with ya, bub - I work alone. And that's not gonna change. ^w^” — I-42, shortly before striding off dramatically 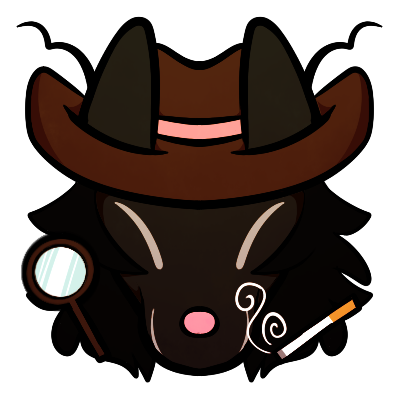 I-42's lanky, imposing form is most often obscured by their pale red-brown trench coat and a slightly lighter hat that casts their face into shadow. The coat's buttons and hat's band are bright pink. Their wiggly antennae and the ears of their black weasel mask poke through the brim of their hat. Their mask's nose is a bright pink and protrudes from the mask itself. Its expression, despite their imposing looks, is a cheerful ^w^. Their skin is dark and their spiky hair black. Their number is emblazoned on both their shirt and the left breast of their trench coat.

I-42's missions frequently send them headfirst into danger. They have lost many limbs as a result and in typical notail fashion replace them with limbs of other species. They especially love to replace their legs with those of long-legged species, most often drakons.

They can rarely be seen without a cigarette hanging from under their mask, mostly for the aesthetic. As a result of their smoking habit they are a frequent cougher. No matter how many times they are advised to stop ruining their lungs they refuse to quit.

On any given day one cannot guarantee which side of I-42 they will see. Some weeks they are cheerful, affectionate, understanding and gentle; others they are cold, aloof, grizzled and snappish. One constant is that if given affection without warning they will lash out automatically, perceiving it as an attack. If in a cheerier mood they will apologise profusely and help their victim out, but otherwise they will merely harumph, inform the person they should be more careful and walk away with a dramatic swish of their coat.

Like most I-classes, I-42 is on a constant hunt for the truth. Their ability to play both good cop and bad cop as the situation requires helped them rise through the ranks of their class despite their naturalborn status. Despite their genetic hatred of lying, they can't help doing so compulsively about any minor thing, much to their own chagrin.

When in a good mood they are known for their sense of humour and tendency to play, sometimes dangerous, pranks on subordinates and equals alike. All their seasoned employees are cautious about entering the office unprepared for a bucket above the door, or shaking I-42's hand in case of a whoopie cushion or hand buzzer. In a more aloof mood their jokes translate to sarcasm and dry wit.

No matter their mood, I-42 hates showing weakness in any way. If it's pointed out they were wrong about something they'll remark that of course they knew that, they were just testing those around them. They try to keep their cool in every situation, and grow extremely frustrated when they lose control of themself in any way. An ardent atheist, they scorn religion as nothing but flights of fancy, and have no respect for authority divine or mortal. They hate being bossed around or tied down in any way, and are more than vocal about it. The only authority they can bring themself to cooperate with are the J-classes their work is so closely entwined with. If there is one thing they can drop their cynicism and bitterness for, it is the search for the truth.

While considerably more gruff about it in their aloof moods, I-42 will rarely hesitate to help someone in need. They are not much good at comfort in any state of mind and prefer to distract a sad person with gifts, stories, activity or humour rather than try to console them. If this doesn't work I-42 will grow frustrated and blame it on the person they're trying to help rather than admitting to any fault of their own.

I-42 is constantly monologuing, which would be fine if they didn't feel the need to do it aloud. In company they at least do it under their breath for the most part. They get very peeved if their narration is commented on or interrupted.

I-42 is the natural-born offspring of a regular I-class and a Classic-I. They were close with their parents, and traumatised when on a mission to a space station a raid by alien pirates left both parents dead. They had to make their own way back to Eukaryote, where they were taken in by the rest of their parents' I-class team and given an M-class to take care of them. Embittered by their loss, they decided they despised aliens as a whole for robbing them of their loving family and leaving them with a distant M-class who couldn't care for them as their parents had.

Once they left the forest, they resented being assigned to missions on other planets. On what would have been a simple mission to solve a missing persons case on a distant notail-run planet they uncovered an elaborate crime ring trading frescari as slaves. Despite their qualms about other species, through determined investigation they managed to dismantle the crime ring and earned the loyalty of the imprisoned frescari. The frescari welcomed I-42 into their family afterwards, and I-42 began to realise that not all aliens were as cruel as the ones who had robbed them of their parents.

While the achievement was nothing major to notails, it certainly looked good on their resume when the position of I-42 opened up and they decided at the urging of their new family to apply. They were accepted, and their skill at investigating has enabled them to keep the position despite dying of old age a few times.

Toon Alliance: I-42 is close with their family of frescari and often uses their cartoonish, resilient weapons. While they work best alone, they can usually be found with a frescar or two trailing on their heels.

• I-42 has admitted that they mostly wear their hat to protect their sensitive eyes from too much light. They view this as a birth defect and prefer to keep it a secret.

• They are known to have requested eemen legs on numerous occasions and been turned down every single time.

• I-42 used to be 6'1, but after they died the first time O-6 ensured their clone was shorter than him as a power move. Now they are naturally 5'11. Their height is only increased by their new legs, which they keep up as a passive aggressive competition with O-6. 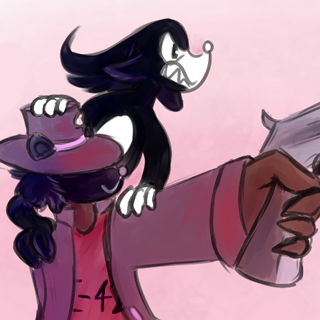