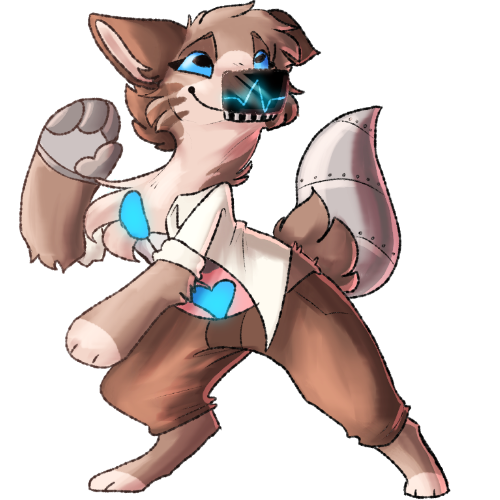 “Clockworks are people too!” — Jexie

Jexie is an earthy brown geiger with a cream colored belly and darker brown stripes on her cheeks and down her back. Her tail is typical of a geiger, but the metallic end is shorter and thicker than most. One of her ears is upright and cat-like while the other is folded against her head. Her midsection is all mechanical. If one was to look close enough they would be able to see her insides at work because it's see-through. Her pulselight and belly light are light blue.

Jexie is typically seen wearing glasses and wearing a white dress shirt and dark brown pants. She stands upright unlike most geigers.

On first glance, Jexie seems like a nervous fellow, carrying herself anxiously, but she is far from that. When talking to her, her entire demeanor changes. She becomes confident, and has little to no issues speaking to others. She is capable of rambling for hours about anything if given the chance.

Jex has a very strong moral compass and is very passionate about doing the right thing. If she wants to do something she deems just or right, it is very difficult to convince her not to. Jex took up the task of being interviewed to allow her species to have rights because of her intense drive. She deems it as right, and thus it must happen. This has led her into more than her fair share of conflict with others.

Jex was born an ordinary geiger. Went to school, grew up, became a historian. But, one day a foreign species landed on their planet. For the first time, geigers had seen something not from their world. And thus, geigers were thrown into the rest of the universe. Jex wanted to learn about about the universe. To speak their language. She quickly picked up limboish and learned about this whole new universe opened to her.

After learning of how clockworks are treated, Jex wanted to fix this however she could. When she heard about how the leaders of her species were planning to try and apply for specieshood, she volunteered to be the one to do it, since most were scared to even try, worried they would be shot and set aflame on the spot.

What is known of the event is that Jex was interviewed by a human in some sort of attempted sabotage that failed as Jex kept her cool throughout it all. Once the interview was over, Jex had her papers signed. A member of a elimination ground made an attempt on her life, but before they could shoot, the human appeared. With a gentle touch to the forehead, the attacker fell dead. Her species was saved and allowed their species' rights. Jex spends her time baking and learning about the history of the worlds outside her planet. She also leaves little gifts for her human friends out in an unknown location along with several other geigers, knowing that meetings with a human directly could be deadly. Jex says she is sure the humans appreciate the gifts very much.

Human Magnet: Jex always seems to run into humans. It happens unusually frequently, but Jex doesn't mind too much.

• Jex is usually seen wearing a few layers of shirts because her mechanical midsection is very fragile, and she wants it to stay protected.

• If asked to, Jex will bake anyone a cake. 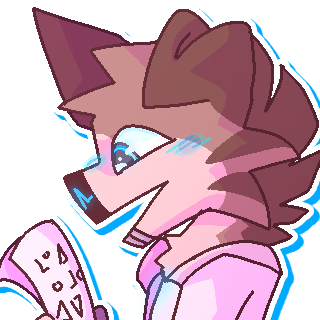