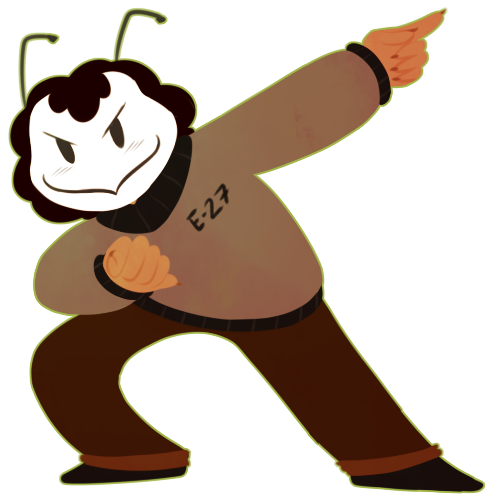 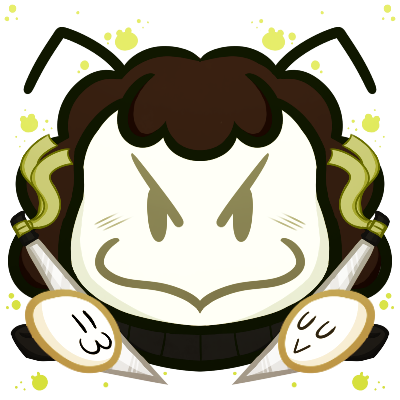 Job: Exploration And Reconnaissance
Likes: Adventure, Frogs, Any local authority, Seeing new places, The smell of fear
Dislikes: Crime, Dissenters, People who don't obey
Notable contributions: An exceptional U-class, the only one recorded to have every overcome their own ingrained panic response in adulthood. The only living U-class whose identity is known.

E-27, or as they like to be called, Kero, is a rather average notail, of middling height, weight and age. In fact, it would be very hard to remember them, if it wasn't for their atrocious personality. They have the typical brown notail skin tone, and despite their living conditions keep themselves very well groomed, and usually dress in comfortable but not outstanding clothes. Like most E-classes, Kero lets their claws grow out.

Kero's mask is shaped like that of a frog and toad, with a smug expression.The eyebrows on the mask are actually stickers they stuck on the mask to make it more intimidating. Theories are still out on if this is working or not.

Kero is an the perfect example of an E-class, adventure loving, curious and not smart enough to hold back when they see anything truly interesting to investigate. They jump from planet to planet with a gleeful cheer, happily making both friends and enemies in the search for anything that might help the notail race's eventual expansion. And if they have to kill a few people to do it, well then they simply hope there are no hard feelings. Their nickname is something they picked up along the way, because as they'd put it "E-27 is such a mouthful for new people. >:}"

In fact, the only trait that makes E-27 stand out from every other E-class traveling off world, is their strange passion for rules, almost bordering on an obsession. No matter the time, place or situation, Kero will drop everything to stop any rule breakers they see. Crimes can range from anything from apprehending a wanted war criminal to furiously destroying someone they saw littering. It is notable that Kero will switch what rules they decide to enforce on a planet by planet basis, in accordance with any local authority. If one town had murder as the penalty for stealing, even if the planetwide standard for such a crime was much more lenient, Kero will default to enforcing the local rule. They know the in's and outs of law enforcement for thousands of planets. When in space, they always default to the official notail laws.

The only survivor of an accident that killed their entire crew. Kero suffered amnesia that left them unable to remember much of their early life. When they first woke up, all they could see was the smoking remains of their ship beside them. Only by riffling through their own pockets could they find a few notes that identified them as E-27. Kero managed to send a distress signal in the remains of their ship, and was rescued after a few days. Somehow, it became a less of a big deal then it should have been. Apparently Kero had few friends before the accident, nobody to miss or care for them, and even without their memories they fit right back into the role of an E-class with little trouble. In fact their superiors reported they were more efficient than ever before, who cared for a little changed, that their memory was showing no sign of return? That was expected for someone who had undergone amnesia wasn't it?

Sometimes, Kero has strange flashes of deja vu, yet...nothing they seem to remember makes any sense. Their records said they'd never been those places at all.

These are the concrete facts, but between these leaks and comments by O-9, a certain narrative emerges. U-99, a strangely driven child, chose an eyegret for their capture creature and disappeared into the woods. Yet afterward in a 'strange show of emotion" they reportedly killed their own capture creature in front of witnesses, raving. Whatever occurred in the woods in their childhood that drove them to this act, it seemed to have a profound effect on U-99. Their reports describe them as a mix of exceptional bordering on arrogance. They rose quickly through the ranks on a mix of skill and pure determination.

It is unknown how exactly Kero overcame their biological panic response. It can be construed at some unknown date, they must have been to careless and been found out on mission. Be it arrogance, fate or simply a fault in genetics, somehow U-99 survived this encounter long enough to cover it up.

While the Cosmosdex could not contact any U-classes for a statement, the danger a U-class without the panic response poses to other U-classes is astounding. By overcoming their own panic response, U-99 could expose the entire U-class with no ramifications towards themselves. Though unconfirmed, the unexpected disaster that befell the original E-27's crew becomes suspect when it can be assume U-99 was the one on board.

Luckily for the U-class, it seems their mission backfired in a most fortunate way. With their amnesia, no additional attacks on Kero have been reported but it can be assumed they are being watched, very, very carefully.

E-27 was a normal explorer class notail. They survived their trials in the woods, they managed to work their way up the ranks of notail society. They were not an unpleasant person, but they had few friends and few connections. E-27 seemed content to meander through life, ignored by those around them, satisfied only by their work.

It didn't really matter what it was. It didn't matter if E-27 tried to make amends, or ignored the problem entirely. It was recorded by someone nearby, and one night, long after they'd assumed such a mistake had been forgotten, E-27 opened the door to find someone who looked exactly like them inside, down the mask upon their face.

E-27 died that night, but not officially. They had made a mistake, but their role could still be useful to the U-class that had been chosen to replace them. U-99, unknown to everyone, accompanied the original E-27's crew to an undiscovered planet, with the presumed intention of simply keeping an eye on off world E-classes.

This is only information that can be gleaned about the circumstances of E-27's replacement. All other knowledge has come from rumor, and a few unverified leaks from other suspected U classes, presumably out of hopes to eliminate Kero.

These recent leaks pinpoint Kero's original identity as U-99, a U-class disguised as an M-class from birth, yet was transferred to several other unknown roles throughout their career. The files note U-99 strange competitive drive after they returned from the woods, a rarity among their class, but make no note of any other abnormalities. U-99 only surfaces again several years later in a report about rumours of an U-class who had somehow managed to overcome their total panic response. The last document hints at a plan being set in motion to deal with U-99, as they were now a breach in security.

U-Class: U-classes are brutal and highly trained social infiltrators and spies. Even without memories, Kero retains many of the skills they retained during their time as a U-class, including an incredible skill for acting. If they wished to truly apply themselves, Kero could easily replicate the personality, tics and sound of anyone they had met. They also have a strong sense of ingrained loyalty to any authority figure they see, willing to immediately turn on friends or allies to appease them.

• Kero has the original E-27's capture creature, a very large toad that can swallow nearly anything its size. Their original capture creature isn't relevant, they killed it themselves shortly after leaving the woods.

• Keros nickname comes from a noise they sometimes make when particularly emotional. A small "kero! >:}" often precedes their arrival.

• The only reason all of this is known is due to an leak of information from O-9 and a few unknown sources. It is unlikely that E-27 has ever seen this page. 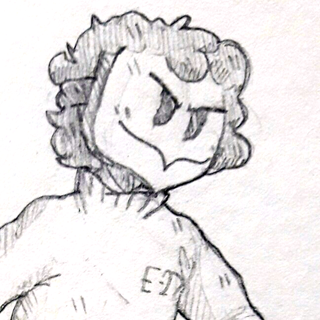 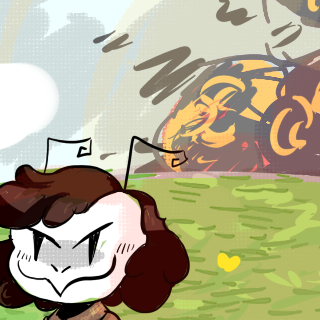 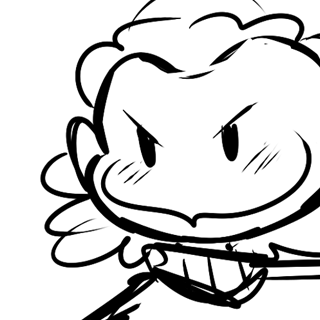